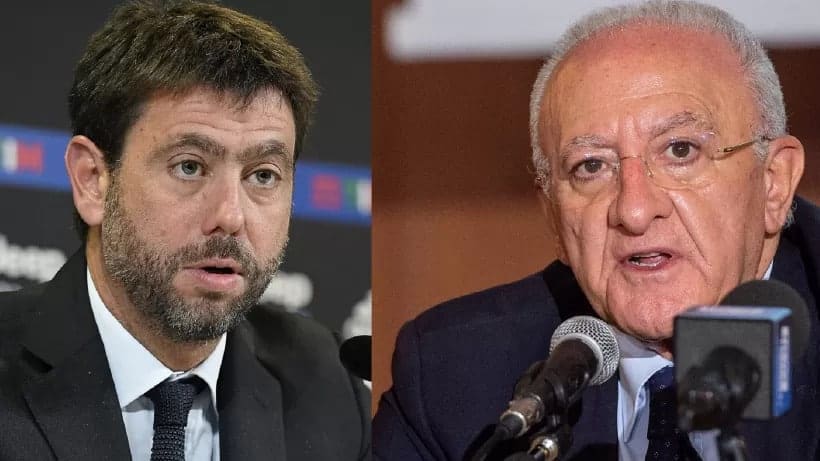 The Azzurri was scheduled to take on the Old Lady last Sunday, only for the ASL (local authority) to refuse the team to travel, while the Italian FA initially stated that the fixture must go ahead.

The fixture now looks likely to be rescheduled, despite initial expectation of a 3-0 walkover to be handed to Juve, who had turned up to the stadium despite reports declaring that their opponents had been denied an exit from Naples.

De Luca has now claimed that the club should thank the authorities for taking the decision to protect the club, and Italian football’s star asset Cristiano Ronaldo in particular from the spread of the virus, before attacking the stance of Agnelli.

“Nobody has thanked us for preventing Cristiano Ronaldo from getting the virus,” De Luca said on Facebook (as translated by the Mirror).

“Try and imagine it. If Napoli had travelled with several positive cases in their squad like Genoa [who lost to Napoli before recording 14 Covid-19 cases] did.

“If Ronaldo had got the virus a week later, we would have hit the front pages even of the New York Times .

“The protocol is no good when it comes to health and the laws. Napoli didn’t travel because the ASL decided that and Juventus ended up going to play with the ball boys.

“The players, from a health point of view, are subjected to the same rules as all Italian citizens. And, therefore, Napoli will not play because they have been quarantined by the ASL.

“Juventus, through the words of president Andrea Agnelli, made a painful statement, embarrassing. ‘Since there’s a protocol, we will go to the stadium,’ they declared.

“The Juventus president is a man who is passionate, not only about football, but philosophy too. And that’s why I remind him of what Schopenauer said: ‘Honour has not to be won; it must only not be lost.’

“If I had behaved in this way, I would have felt that I lost my sporting honour.

“We are talking about sport, sporting values, sporting loyalty, honest competition and respect for our opponents.

“But how can we reduce ourselves to the pettiness of pretending to win a match when the antagonists are quarantined by the ASL and not by their own will?”

It was a difficult situation that both sides were put under. Juve were told by the division that the fixture must go ahead, while the authorities in Napoli forced the team to stay grounded.

While Agnelli and our Juve team simply followed the instruction of the league, I’m sure the chairman will have no issue with the fixture being rescheduled in favour of preserving the sport’s credibility.

This will no doubt add some fuel to the future fixture (assuming the match is given the nod to play in the near future), but was Agnelli in the wrong with his initial comments?