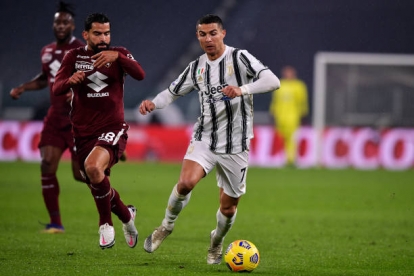 Torino will be kicking themselves this evening after letting an opening lead over Juventus disintegrate into a loss in the final stages of the match.

The visitors started the match brightly, keeping very organised at the back, and with an early lead, looked good for a result.

Their goal may have been scrappy, with defender Nkoulou first to get onto a loose ball in the Juve box as we failed to clear the corner.

There was little positive notes to take from our part before the break, and I would love to say the second half started better.

The visitors were refusing to lose their shape coming up to the hour mark, despite our increased possession and attempts to get forward in behind, but with around 20 minutes left to play, Torino started to lose their heads a little.

The pressure of a famous derby win appeared to get the better of them as they were mistiming tackles, and it didn’t take long for the tide to change.

Juan Cuadrado latched onto a corner which had been cleared to the edge of the box, to fire through the crowded box and into the net, only for VAR to deem Bonucci to have been offside, and somehow have interfered with the line of the shot…

Chiesa had a couple of chances to level also, and Cristiano Ronaldo looked through on goal only for the defender to scramble back to block his shot, but finally the leveller came.

Weston McKennie got his first goal for the famous Black & White with only 15 minutes left remaining, and the team was revitalised by the breakthrough.

We continued to push our rivals, and the fight was apparent with as many as five cards shown inside the final 20 minutes, excluding a red card for Pinsoglio on the touchline…

It was an unlikely hero who nabbed the winner however, as Leonardo Bonucci stayed in the box after the corner was cleared, and Juan Cuadrado put the ball in the perfect space for the captain to nod home.

It has been an eventful derby in which the result went the right way, but you can guarantee that the visitors will be frustrated.

Video: Derby magic as Juventus take lead at the death