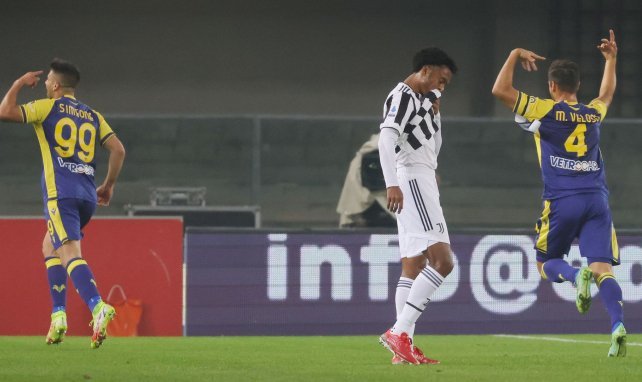 Juventus come to life too late to deny Verona the victory

Verona were deserving of their 2-1 win this evening, while it was too little, too late from Juventus.

The Old Lady appeared to have left their defensive focus at home as they looked to play open football in the early exchanges, with both sides able to carve out chances at either end, but it was the hosts who managed to break the deadlock early on.

Giovanni Simeone was in the box to poke home the loose ball as he closed out the attack, and before Juve could get to grips with that scoreline, their deficit was doubled.

That man Simeone once again was credited with the goal after a wonderfully placed effort into the far corner of the goal left Wojciech Szczesny with no chance of stopping it.

While we tried to weather the storm, the game did slow a little, and I feared that Simeone had completed his hat-trick when he had the ball in the net once more. This time it was deemed that his team-mate had fouled Bonucci before the ball had fallen to the striker, who struck his effort deep into that far top corner a second time only to be denied by the referee’s decision.

Dybala did get one late chance into the half to get on the scoreboard as he looked to close off a counter attack, but he could only guide his effort onto the wrong side of the crossbar.

Despite trailing 2-0, the manager allowed the same XI to return to the field after the break, and there was little improvement or fight shown initially. Weston McKennie and Manuel Locatelli were both brought on around the hour-mark and our attacking cohesion did improve, although there was still very few clear-cut chances being carved out with our opponents not needing to take any risks.

We did come to life with 10 minutes left on the clock however, when Weston McKennie was found in space on the edge of the box, and he lashed his effort home with power off the underside of the crossbar.

We were so close but so far from scoring again for almost the entire remainder of the 90 minutes, only for that final shot or pass to go awry, and it turned out to not be our day today at all.

There is now huge question marks on whether this team is showing signs of heading in the right direction at all, and neither Zenit St Petersburg or Fiorentina next weekend will be forgiving if we fail to turn up again.

Video: Weston McKennie rockets one in off the bar to tee up an exciting finish