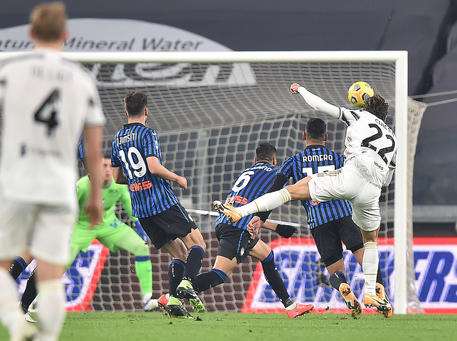 Juventus put in an impressive performance as they hosted Atalanta, but they failed to clinch the all-important three points.

Juventus shot out of the blocks in the opening half, dominating possession as well as causing plenty of trouble.

It wasn’t long in when Cristiano Ronaldo was picked out by Alvaro Morata inside the box, but his miskick when high and wide.

The two combined for the next clear-cut chance also, with Alvaro Morata’s run getting in behind once again, but his lay-off to Ronaldo is blocked and falls back to the Spaniard, who fails to backheel into the open goal.

Atalanta grew into the game a little later, and the match began to turn into an end-to-end affair, but it was Federico Chiesa who opened the scoring.

The Italian cut across the defenders to his right, but fired into the top right hand corner, way out of reach of Gollini to notch up his first Serie A goal since joining his new side.

The Nerazzurri will have been thankful to have made it into the break only trailing by one, but not much changed going into the new half.

They fail to take any of their chances however, and they were pegged back by an equally impressive striker by Remo Freuler. The action was similar to create room for his shot as he cut to his right, but his shot went across the keeper with some power and fired off the crossbar to bounce down and then into the roof of the net.

Moments later the Old Lady were gifted what could be considered an easy penalty, although VAR refused to have any issue with the decision, and that man Cristiano Ronaldo was unable to add to his amazing tally so far this season.

The game was fierce onwards, with both sides attempting to find the winner, but in the final 10 minutes, it was all one-way traffic.

Juventus threw Paulo Dybala on for Alvaro Morata as we went in search of victory, but it just wasn’t meant to be.