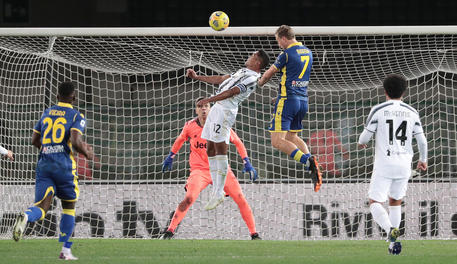 Juventus have dropped more points in their bid to challenge for the scudetto, with Verona earning a 1-1 draw this evening.

The Old Lady came flying out the blocks and could have gone 1-0 up in the opening 90 seconds when Aaron Ramsey tested the goalkeeper, but he managed to direct it out for a corner.

The Welshman was again at the centre of the spotlight a quarter of an hour into the match when he picks up a yellow card for a challenge which he very clearly gets the ball, and alarm bells began to ring.

We continued to play fluid and looked assured as we chased the opening goal, but we were unable to get the breakthrough despite mustering nine shots in the opening 45.

Shortly after the restart however, Ramsey’s fine run saw him play in Federico Chiesa who was sprinting with authority, and the Italian manages to cut back and play across the box to Cristiano Ronaldo in space, and we know he isn’t one to turn down an opportunity to score.

That goal should have seen us build in confidence, and allow us to play without the shackles, but we were struggling to use our possession well enough in the final third.

Verona gained confidence amidst our struggles and started to challenge us, and with 15 minutes remaining their efforts paid off.

We failed to clear the ball on three occasions after Alex Sandro’s attempted throw-in was challenged, and Verona eventually picked up possession to play it wide to the left, and their ball is chipped into the box for Antonin Barak to leap high over Alex Sandro to head home.

We came alive as we went in search of a winner, but we simply were not efficient enough in possession to carve out a clear goalscoring opportunity, and it was another two points dropped on the day.

Will Juventus have to consider giving up the scudetto early?