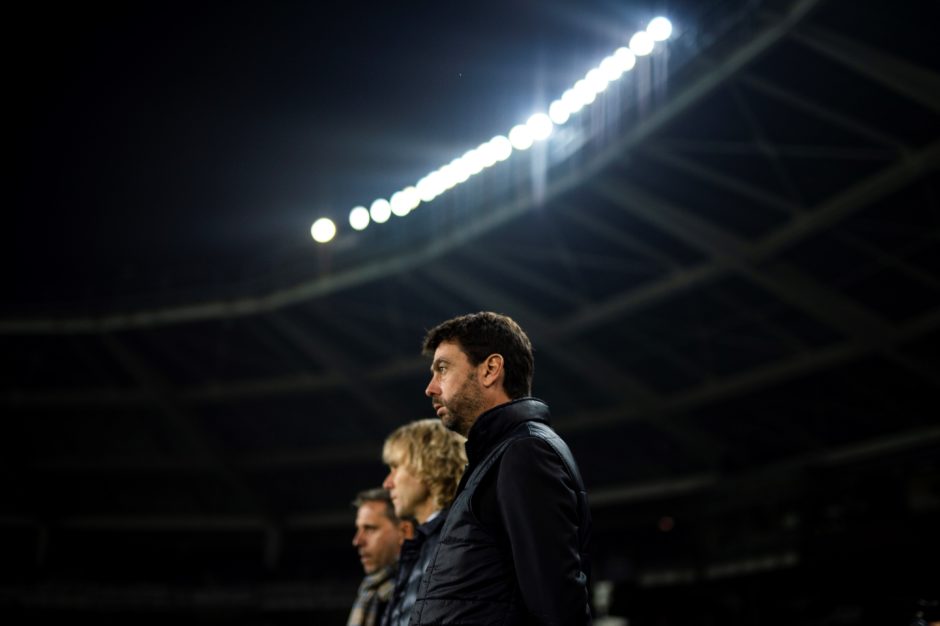 Juventus are set to make capital gains of €160 million for the 2019/20 financial year, the highest in the clubs’ history.

Writing in La Gazzetta dello Sport, sports finance journalist Marco Iaria outlines that the recent sale of Miralem Pjanic will see the club generate the highest capital gain from a player sale during the Andrea Agnelli era, the third ever in the clubs’ history, with the total capital gains for the year exceeding €160 million: a club record.

The recent Arthur-Pjanic exchange with Barcelona has a particular significance from an accounting point of view, although there will be no transfer of funds, except for the €12 million surplus that Juve will have to pay to the Spaniards: €72 million for the Brazilian, €60 million for the Bosnian, which generates thus a capital gain of approximately €47 million (€13 million residual cost), for a positive accounting effect of €41.8 million net of the solidarity contribution and ancillary charges.

Overall, it’s the second highest capital gain under the chairmanship of Andrea Agnelli. The first was the one obtained from the sale of Paul Pogba to Manchester United in 2016: €96 million, reduced to 73 after the payment of commissions and contributions. In Juventus history, the Pjanic operation is placed on the lowest step of the podium, behind Pogba and Zinedine Zidane, sold in 2001 to Real Madrid with a capital gain of €70 million: wanting to discount the prices based on the Istat revaluation, today the capital gain on Zidane would be worth €104 million, pushing that of Pogba to 99. Bonucci (€38 million) ranks fourth, Filippo Inzaghi and Vidal (€31 million) rank fifth. 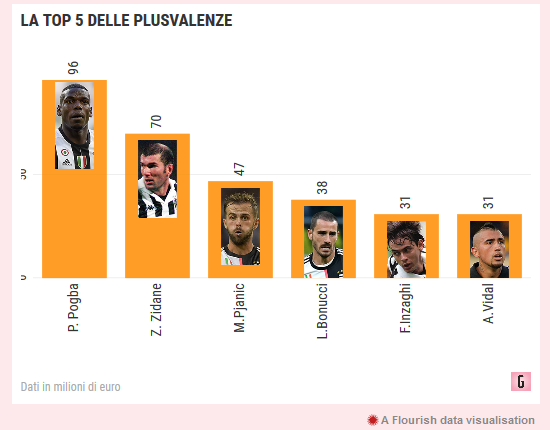 In the last few days, Fabio Paratici has defined some ‘side deals’ relating to the players from the Primavera and Under 23 squad. Certain operations, without the passage of cash, are purely accounting, but those of the second team are starting to create value, offering a showcase in professional football to young people of 20-21-22 years, useful for trading.

The B team project is medium-long term and also aims at the structural insertion of some elements in the first team, in order to lighten the amount of engagement. This second step has yet to materialize, in the meantime the Under 23 has secured its first trophy, the Serie C Italian Cup. As for the market, the already safe transfers of Muratore and Matheus Pereira (€14 million capital gains in two) today will be added those of Primavera player Pablo Moreno (in an exchange with Manchester City for Correia, €10 million), Mavididi (to Montpellier, capital gain of €6 million) and Sene (to Basel). Calculating the already official transfers, during this year Juventus has recorded €146 million capital gains so far, among which, in addition to Pjanic, Cancelo (€20 million), Kean (27) and Emre Can (15) stand out. It is already a record in Juventus history: more than was collected in 2016-17, the year of the record sale of Pogba, and with the dealings this past week, it will exceed €160 million. 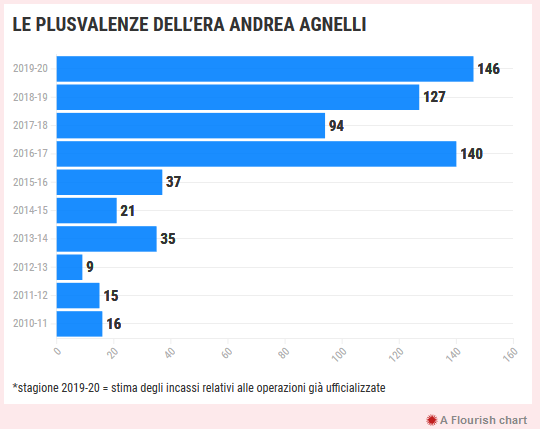 Valuable revenue to cushion the heavy effects of Covid-19. The loss in the 2019-20 budget will still be substantial, but will be mitigated by capital gains and savings on salaries for €90 million, by virtue of the agreement between the club and the team for the months of suspension of activity.

On the other hand, even if Juventus started playing again in the closing financial year, today they will record very strong reductions in turnover. The estimated non-takings at Allianz Stadium is €15-25 million, not only for ticketing but for all collateral activities (the museum will reopen shortly), including those outside the match day (the nno match day proceeds amount annually to €3 million).

Another sector that is particularly suffering is merchandising, managed on its own, with an annual turnover of over €40 million. There’s a separate chapter for television income. Applying the principle of temporal competence, the overrunning of the league and Champions League in the summer will deprive the 2019-20 budget of an important slice of domestic and European TV rights (in the form of UEFA awards). This is why there was a need to implement a series of accounting measures, considering that the management of Juventus’ income statement was already suffering (€40 million loss of 2018-19, 50 in the first half of this season) following the big expenses in recent years.

The financial seal, in short, acts as a counterpart. Before the outbreak of the pandemic, Juventus had completed the massive €300 million capital increase which, unintentionally, had the benefit of securing Juventus in a highly problematic context that brought several clubs to their knees. That extraordinary operation, conceived initially to give ammunition to the 2019-24 global development plan with the idea of ​​making a mega-investment for a young Ronaldo, has turned into a weapon of defence against the virus, a barrier against the planetary economy crisis.

In this way, any risk of business continuity was avoided which, instead, appeared on other football environments. Now it is a question of holding on, counting the damages, reducing them to the minimum possible and re-knitting the thread of the growth plan, in a scenario that will be different for everyone from the past.

Juventus will try again for Haaland