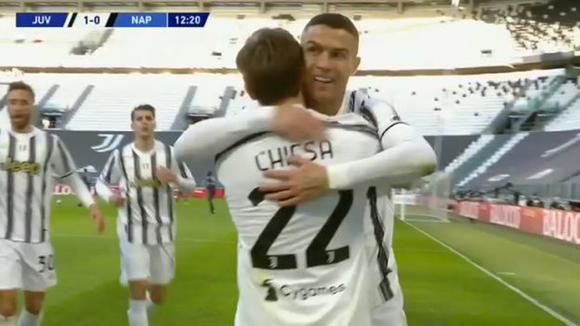 Juventus have earned a impressive 2-1 victory over Napoli, in a match that could have been won by more.

The Old Lady started the match brightly and were almost awarded from the off. Danilo and Cuadrado combined down the right to create space for the cross, but Cristiano Ronaldo mistimed the thrust of his head to allow the ball to go wide of the goal.

We continued to dominate the early exchanges and the opening goal didn’t elude us for long. That man CR7 didn’t allow his early miss to haunt him as he broke the deadlock, when Federico Chiesa’s wonderful work on the ball allowed him to cut it into the Portuguese to fire home.

We went into the break knowing we should have been ahead by more, but we had a lot to be positive about having maintained a firm grip on the tie.

We continued to stay solid in all areas of the pitch after the break also, although the same couldn’t be said for the referee.

For whatever reason, the official has refused to take three penalty claims to VAR(one or more for either side), and the Old Lady will certainly feel let down by their rejection.

Two of our suspended players made their return in McKennie and Dybala with just over 20 minutes on the clock, and the latter’s return made an instant impact.

The Argentine received the ball with his back to goal just outside the box, and manages to manoeuvre himself into space to place his effort beyond the goalkeeper’s right.

Napoli enjoyed a brighter spell at the end, with Victor Osimhen causing a nuisance in and around our box, and that man finally convinced the referee to blow for a penalty late on.

Insigne’s injury-time spotkick wasn’t enough to help them recoup any points however, and all the spoils went to Juve.

We now hold a three-point lead over the Azzurri with just eight matches to secure our place in the Champions League.