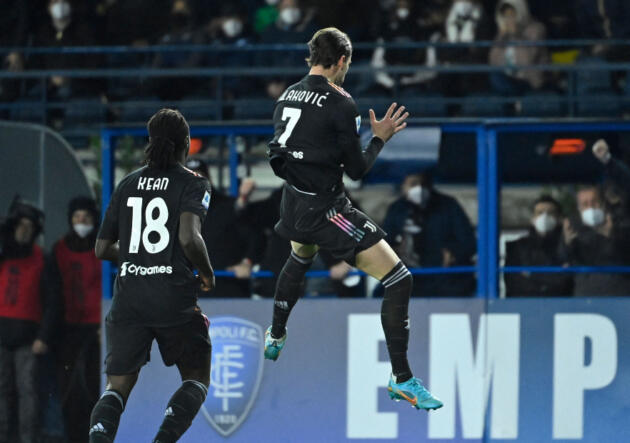 Dusan Vlahovic helped Juventus to seal all three points this evening despite the hard work of Empoli this evening.

The Old Lady started the match well, and they were almost immediately rewarded by an early goal when Moise Kean was put through on goal, but his low effort was deflected just wide of the goal.

We continued to push up in numbers, but our passing in the final third wasn’t quite there when it was needed. We did manage to break the deadlock when Moise Kean was found with the cross to head home, and he appeared to refuse to celebrate the strike interestingly.

The home side were not behind for long however after some terrible defending from the corner allowed the ball to fall to the feet of Zurkowski, who was free to tap it into the net from close-range.

Just as we appeared destined to go into the break level however, Juan Cuadrado caused havoc in the final third before cutting it into Vlahovic near the penalty spot, and he faked the initial shot before neatly placing the ball into the net.

We looked to be keen to play things more patiently after the break as we looked to concentrate on keeping possession, but we did struggle to carve out many chances. Our first real opportunity of the second-half was Vlahovic’s next goal. The Serbian controlled the pass which was laid off behind his run in spectacular fashion to put himself in on goal, and he neatly lobbed the goalkeeper this time around.

The visiting side reacted to the latest strike however, and began to pile pressure on our side, and that force did pay off with their second off the evening. A fine strike had to be blocked with the head of Luca Pellegrini, who managed to deflect it onto the bar, but Empoli retrieved the ball before playing it out to La Mantia to score.

Gli Azzurri were unable to build on their latest goal however, allowing the Old Lady to hold onto their 3-2 advantage until the final whistle, and despite the three points, there is a lot of alarm bells which need addressing.

Video: Empoli refuse to lie down as they cut Juve’s lead to one

Report: Barcelona give up on De Ligt as they pursue another Serie A defender