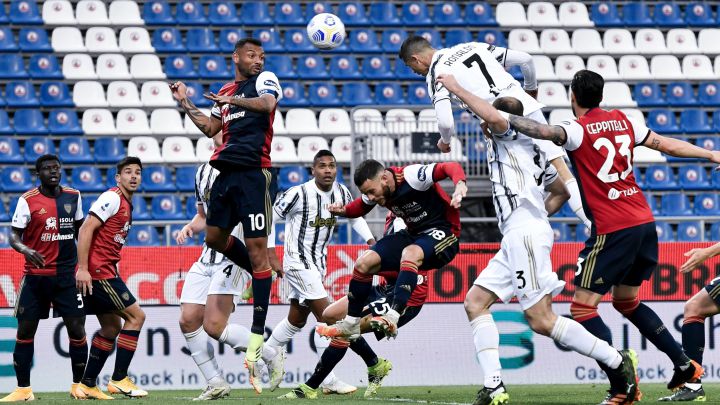 Juventus put midweek woes behind them with convincing win

Juventus have claimed all three points this evening to silence their critics, putting Cagliari to bed with a 3-1 scoreline.

Cristiano Ronaldo and Andrea Pirlo came in for strong criticism in midweek after they were kicked out of the Champions League on away goals to Porto, but have set their sights on ending the season well.

We currently trail Inter Milan by 10 points again, having played a match less than our rivals, and it was an impressive performance.

I was worried in the build-up that the team could struggle mentally after the loss, but there was no signs of any such issues from the off.

Cristiano Ronaldo wasted little time in breaking the deadlock as he leapt high to power the opening goal into the net.

Alvaro Morata had another chance soon after but was unable to guide his effort on target, before Cristiano Ronaldo was involved once more.

The Portuguese breaks into the box to get one-on-one with the goalkeeper before being brought down for a penalty, and he made no mistake in putting that one away.

Just after the half-hour mark that man had made it three. Federico Chiesa’s clever play finds Ronaldo on the edge of the box, and he carries the ball into the penalty area before a neat step-over earns him enough space to blast home with his left.

Ronaldo and Morata both fluffed a chance each just before the break, but we went in comfortable.

We came out after the break a little on the slow side, and were probably a little too comfortably and we allowed our rivals to pull a goal back.

A neat through ball from the right-flank set Zappa running into the box, and he finds team-mate Simeone who manages to fire home.

We managed to control much of the remainder, and should really have added a fourth, but the scoreline was important for the mentality of what will be needed to keep the pressure on the scudetto.

Juan Cuadrado’s yellow card will strike as the only real negative, as he will now miss the next match, but all-in-all there was little to complain about.

Can Juve now enjoyed the reduced schedule to claw their way back into contention for first place?

Video: Cagliari pull one back against Juventus

Ronaldo refuses to do a post-match interview