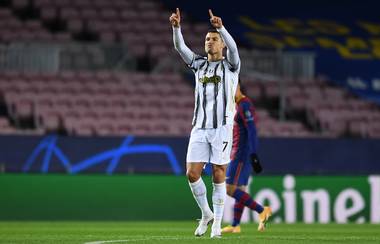 Juventus have stamped their authority on this season’s Champions League by beating Barcelona in their own stadium.

The Old Lady made no secret of their intention to bring the game to the Camp Nou as they targeted top spot in the group, and they have earned just that, sending out a statement of intent to their rivals in Europe.

Barca came to Turin and came away with a 2-0 win, despite Alvaro Morata getting the ball in the net on three occasions, only for VAR to rule them out.

Today was a new day however, and it didn’t take long for our bad luck from the first clash to be reversed on this occasion.

Cristiano Ronaldo has gone shoulder to shoulder with the Barca defender, only for the referee to blow up and gift us the penalty. This was soft, but VAR had no issue with the decision, and the Portuguese was to make no mistake, sending the keeper diving only to put it straight down the middle.

The Catalan club tried to muster something to get themselves back in it, but before they could even build-up to anything the scoreline was already 2-0.

Juan Cuadrado got yet another assist as he teed up Weston McKennie in the box to score acrobatically.

While Barca had more chances, most of their efforts were from distance, and Buffon was barely stretched.

We went into the break at 2-0, knowing this still wasn’t enough to take the group, and we came out in search of that important goal.

Ronald Koeman’s side came out with more composure after the break, helped by the early substitution of Clement Lenglet who had looked destined to pick up a second yellow card if he was allowed to continue.

The two teams were both moving the ball around well, and looking dangerous, but Juve were to get yet another penalty.

VAR was called in to check on a possible handball, and upon seeing the replay you knew it was impossible not to give it.

CR7 sent the keeper the same way, but this time fired it deep into the opposite corner, moving us into top spot with 30 minutes left to play.

Barcelona did pick up in the remainder of the match, but lacked that final ball that could cut us open, and they will now have to settle for taking on one of the winners from the other groups.

This is exactly the Barcelona that we have been seen creeping through, waiting to break out, and this sort of performance should be the exact tonic to steer our performances on course.

Could our side have performed any better this evening?

Video: Juventus make it three as they leap into top spot