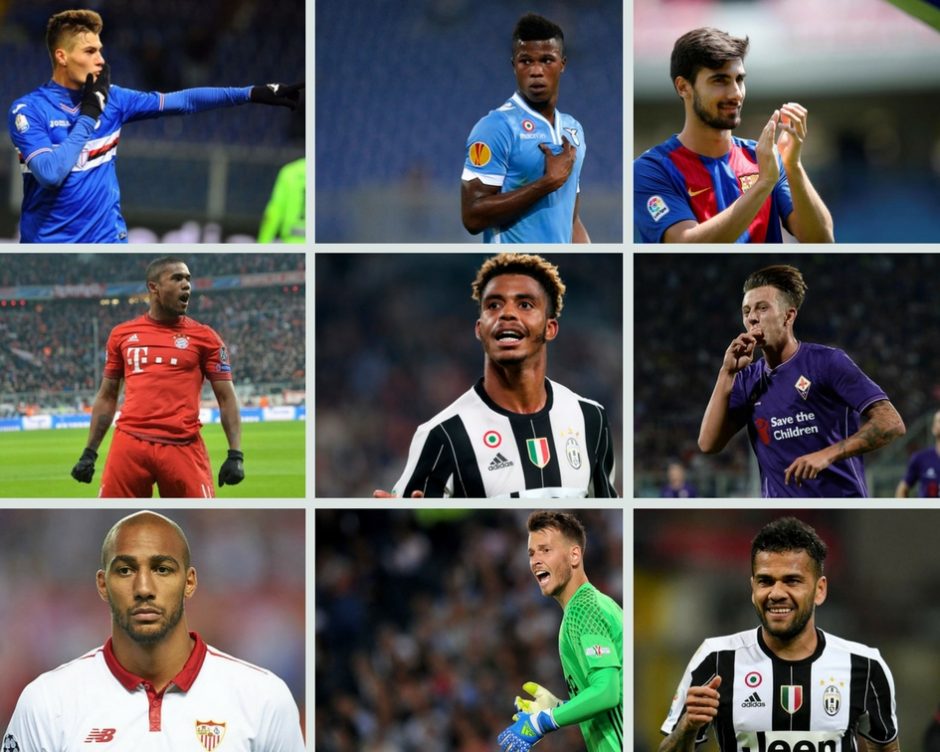 In an effort to cut back on the incessant transfer news, I’ve created a place to discuss all the potential transfers, in and out this summer. With that in mind, here’s a list of the possible arrivals and departures this summer, graded by likelihood of them occurring.

This post will be pinned so you can come back and use the comments section to discuss all the latest news. If there are more plausible news stories, we will add them separately.

By all accounts, he is a Juventus player, with only a medical pending. Sky Sport and other news outlets all report that Juventus have exchanged the required paperwork with Sampdoria and that the deal will cost Juventus close to €30.5m. The payment is likely to spread over the course of 3-4 years, hence Juve not paying the release clause in Schick’s contract. The player is currently on international duty with the Czech U21 side at the European Championships so a medical (that was reported to be scheduled last week) will have to wait.

Verdict: Seems likely to happen, given the comments by Marotta, Allegri and Schick’s teammate Milan Skriniar.

UPDATE: 6/7/2017 – With the first part of his medical over, Schick is a Juventus player. The cost is believed to be around €30m, designed to spread the cost over a period of years. Welcome Patrik!

The winger seems set to leave Lazio this summer as negotiations over a new contract have apparently come to a halt. Lazio Sporting Director Igli Tare confirmed the interest of a number of sides, confirming that the player is going to leave the club, while taking a sideswipe at Juventus: “….Juventus, however, never contacted us officially, but we know they’re talking with his agent.”

Il Messaggero later reported that Beppe Marotta had apologised to Lazio president Claudio Lotitio and further reports stated that Keita had turned down an offer from AC Milan in favour of joining Juventus.

With his contract expiring in 2018, it’s entirely possible that he’ll stay another year and leave as a free agent next summer, although it seems unlikely that Lazio would want that. Marotta has confirmed Juve’s interest in the player, telling Radio Rai: “We’re watching him, I think he’s a good player but for the moment there’s no negotiation. We’re interested, but we’ll evaluate things calmly.”

Verdict: Hard to say – Juve are definitely interested and if the player is truly pushing for Juventus, there’s a good chance of reaching an agreement; The downside is Lazio are reportedly holding out for €25-30m and there’s always the chance Juve wait a year in the hopes of signing him for free.

UPDATE: 6/7/2017 – Nothing yet, but it seems the player is keen to leave this summer which leaves Lazio in the position of cashing in or losing him for nothing in 12 months. There’s also various reports that the player has an agreement with Juventus already….watch this space.

Marotta and Allegri have spoken of the Brazilian as a target and, if you believe anything the newspapers have to say, he’s already reached an agreement with Juve over a salary. All that remains is for Juve to agree on a transfer fee with Bayern who value the player at €50m, while the Bianconeri are offering closer to €40m (Sky). Similar reports suggested that Inter came in with a late offer but the player rejected them in favour of Juventus which offers some optimism for a transfer.

Verdict: There’s confirmed interest, talk of an agreement with the player and very good relations with Bayern Munich. This one feels legitimate and could be our first confirmed signing of the summer.

UPDATE: 6/7/2017 -Everything has slowed to a halt on this possible transfer. Costa was supposedly a Juventus player in all but name, however the loss of Dani Alves may have an impact on how Juve approach the mercato and how they use their final non-EU slot.

I suspect it might be easier to pilot a bathtub to the moon that it would be for Juve to agree a deal with Fiorentina over a player. Federico Bernardeschi is being ‘monitored’ by the Bianconeri, nonetheless, according to Gazzetta and others. An outlandish rumour suggested that Juve would try and sign him along with Douglas Costa, subject to Juan Cuadrado leaving the club. Given that Cuadrado has just finalised a permanent move to the club, it seems like a reach to suggest he might leave this summer (More on him further down).

Verdict: Very unlikely to happen, given the bad blood between the two sides that stretches back many decades. Regardless of what Juve offer, every report suggests that Fiorentina, if pushed to sell, would rather do so abroad.

UPDATE: 6/7/2017 -Berna has told the club he intends to leave and Juve are reportedly very keen on landing him. Allegri has praised the player and it’s suggested that he’s made him one of the main targets for this summer.Expect developments this coming week.

Hardly the most flattering of midfield options, but I’m assured by those that have actually watched the Frenchman last season, that he has a great presence in the centre of the pitch. It’s well reported that N’Zonzi has a €40m release clause in his contract and all the various Italian papers and news channels suggest that Sevilla intend to hold-out for the full amount. Juve have once again confirmed their interest in the player, but seem reluctant to part with such a sizeable amount for a 28-year-old.

Verdict: Based on the latest reports, it seems both sides are at a stalemate for now, which could result in Juve looking elsewhere.

UPDATE: 6/7/2017 – Sevilla stick to their guns and Juve are unprepared to pay the €40m they want for N’Zonzi. Alternatives being sought…

Only the Spanish press seem to have run with this, and it seems speculative, at best. The Portuguese midfielder was a target for Juve last summer, however he eventually chose Barcelona and his first season has been average by most accounts.

Verdict: Tenuous links, doesn’t seem to fit the profile and there’s no mention of him in the Italian press.

The year is 3031, mankind is all but extinct, there’s a mass shortage of food…..and Juventus are tracking Blaise Matuidi. Yes, he’s back this summer. CorSport report that Sevilla’s hardball over N’Zonzi has led Juve to look elsewhere, and that ‘elsewhere’ is Blaise Matuidi; The drunk, one-night stand you return to, time and time again, when you fail to hook up at the club. Jesus wept. Corsport go on to suggest that PSG chairman Nasser Al-Khelaifi would be inclined to sell this time round…..which makes you ask why?

Verdict: If you believe the press, Allegri and Marotta have had a perpetual hard-on for this fella for the best part of two years. Will it happen? If Sevilla stick to their guns and Juve can find no one else, whats to say Matuidi can’t be this summers Hernanes? Lets hope not.

“It’s clear Juve have the right to study all opportunities, when a player is on the market we have a duty to try to sign him, but not right now.” Those were San Beppe’s words on Donnarumma when asked by the Corriere della Sera over a potential bid for the player. At this stage, it seems a stretch to suggest Juve would go after young Gigio, especially as they they reportedly have Wojciech Szczesny in hand.

Verdict: Unlikely to happen this summer….but in the future?

Sky, Gazzetta Dello Sport, CorSport and many others see this as a done deal – Buffon even spoke of it in a way that seemed to suggest he knew the Polish keeper is on his way to Turin. The latest reports in Gazzetta suggest that Arsenal want at €15m for the keeper, however Juve are low-balling them, safe in the knowledge that they have the players agreement and his contracts expires in a year.

Verdict: Seems another likely transfer – With Gigi set to retire after next years World Cup, Juve are keen to secure a replacement ASAP.

A few brief lines linked the pair to Juve but this fizzled out as quickly as Di Maria’s time at Manchester United. Lemar was heralded as a “priority” for Juventus according to Gazzeetta, but with a host of Premier League sides vying for his signature, it seems a stretch.

Verdict: Unlikely to see either at Juve.

Marotta has confirmed that the Brazilian keeper is looking for a new home, telling Corriere della Sera “To satisfy his requests, he’s on the market.” The reliable Romeo Agresti reported Juve were asking for €10m and Milan were an interested party, along with Premier League side Everton.

Verdict: There seems no doubt the keeper is leaving – the only question that remains is which club he joins.

A truly bizarre move by all accounts – The story broke, seemingly out of nowhere, and was quickly followed by a slew of newspapers and channels reporting the same thing: Dani Alves had reached an agreement with Manchester City and the club were now negotiating with Juventus for a move. More reports today suggest this might have been in the works for a while, but there seems no rhyme or reason for it.

Verdict: No word from Juve or Alves yet – I suspect we might hear more this week.

The Gabonese midfielder is considered surplus to requirements and has played a bit-part in the last two seasons. It’s almost certain he departs this summer having never fully realised his potential at Juve.

Verdict: Arsenal or Everton…..or possibly a return to France.

Perhaps the most unsettling of all rumours is that Alex Sandro is being pursued by Chelsea. Marotta confirmed Juvntus rejected a large bid for the player, howere La Repubblica seem quite insistent that the player has an agreement with Chelsea. Today’s Tuttosport reports that Juve are in the process of renewing his deal to keep him at the club. I sincerely hope they’re on the money, for a change.

Verdict: No idea what to make of this one….perhaps time will tell.

Despite having recently finalised a move to the club, La Stampa, Gazzetta and others report that Cuadrado is on the market and being sought after by PSG. Again, it’s a story that seems to have come out of nowhere and doesn’t have a great deal of foundation.

Verdict: Implausible…..and yet if he were to leave, Juve could find a worthy replacement this summer.

All 4 players seem likely to head out on loan, although there are suggestions that Orsolini and Bentancur will be assessed by Allegri during the summer, and may yet remain with the club next season. The general impression is that Orsolini, Bentancur and Mandragora will all be sent to other clubs in Serie A to gain valuable experience while Sturaro may find himself at Atalanta where he could easily play regularly in the first team as they begin their Europa adventure.