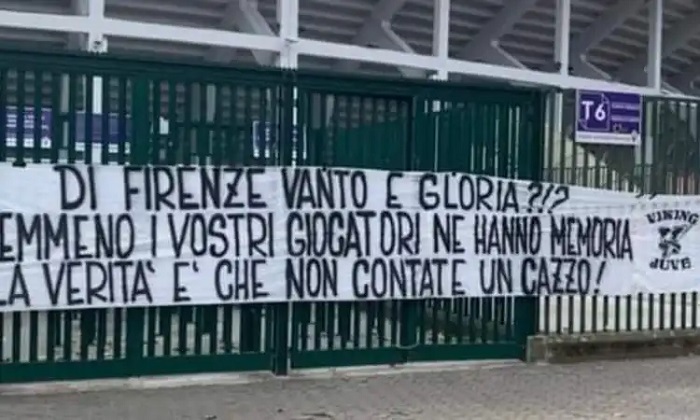 Juventus ultras have mocked Fiorentina after La Viola lost another top player to the Bianconeri.

Dusan Vlahovic has become the latest player to swap Florence for Turin, with the Serbian joining the Bianconeri in the most expensive January transfer in Serie A history.

The likes of Federico Bernardeschi and Federico Chiesa have moved to Juve before him, but La Viola dislikes selling their players to their rivals.

Vlahovic had refused to extend his contract with them and he also didn’t want to join another club.

After Juve completed the transfer for the former Partizan man, Calciomercato says the Juve ultras group, the Vikings, hung a banner at the Artemio Franchi Stadium, the home of La Viola.

The banner reads: ” The pride and glory of Florence?!? But even your players have no memory of it. The truth is that you don’t count a sh*t!”

This is one reason La Viola don’t like to sell their players to Juve as they want to prove a point to us always.

Sadly, we would remain the bigger of both Serie A sides and La Viola has no choice but to continue grooming top players who would eventually leave them.

Vlahovic has proven to be a hit at the Florence side. Hopefully, he would not take much time before he scores goals for us.