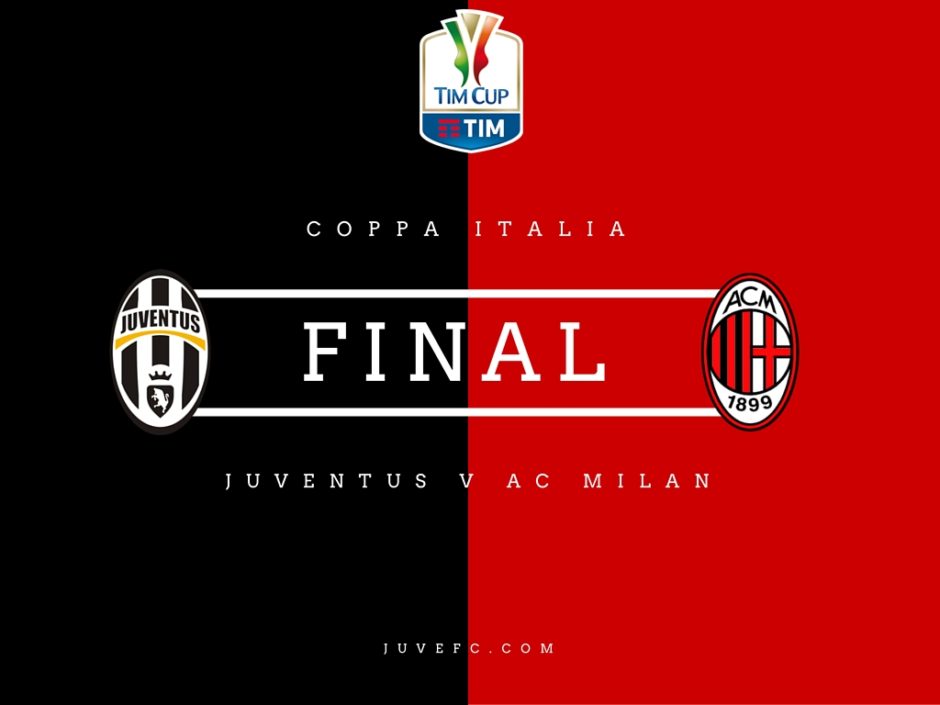 On Saturday night, Juventus will wrap up the successful 2016/2017 season with the Coppa Italia final against Milan, hoping to bring home a second trophy. The Bianconeri have lifted the cup ten times in their history. After a month of playing for nothing, Juventus will resume playing a meaningful game. The last bout against Sampdoria was a nice response after the disastrous trip to Verona, so the team will approach the clash, riding high.

Obviously finals are always self-motivating and the words by the players in the last few days have been on point. The biggest risk is to underestimate Milan after they had a subpar season and very mediocre finish, but I think the fact that the Rossoneri challenged Juventus very hard in the most recent encounter, albeit in different circumstances as it was the last game of Sinisa Mihajlovic’s tenure, will make sure that does not happen.

Will it be another Bianconeri victory over Ac Milan?

Sami Khedira will not be available due to a calf strain, so he joins the injury list along with Claudio Marchisio and Martin Caceres. Leonardo Bonucci is disqualified, but will travel with team as he was not allowed to join Italy’s non-mandatory mini-camp, causing a little stir. I think the decision by Juventus had more to do with some of extra activities surrounding the Coppa final, meeting the Pope for starters, than with the pettiness of not sending the player just because they did not have to.

Norberto Neto will replace Gianluigi Buffon in goal: it’s fair to give the no.12 who played in Coppa, the chance to feature in the final, but I have to admit this is one of my least favourite traditions. Massimiliano Allegri used Andrea Barzagli in the heart of the defence in the last game, so it will be up to him to coordinate Giorgio Chiellini and Daniele Rugani. I do not think these three men have ever played together, hopefully there will not be any problems with chemistry between the players.

The doubts are the usual ones. Hernanes seems to be a little favoured over Mario Lemina for the deep-lying playmaker position: the Brazilian midfielder usually has a couple of shining plays per game, but honestly I would like to see the Frenchman, who is set to remain at Juve next season, in a big spot like this. Kwadwo Asamoah has a slight advantage over Stefano Sturaro for the other spot in the middle: the Ghanaian powerhouse has always been the first man off the bench when healthy, although he is a weird fit with Paul Pogba, as they both play better on the left, so maybe the Italian youngster could get the nod.

Stephen Lichsteiner is set to beat out Juan Cuadrado on the right, while Patrice Evra is expected to start on the left, although I would like to see Alex Sandro for the same reasons of Lemina, especially with Evra unsure about extending his contract with the club past this summer. You can not fabricate big-game experience, there is only one way to gain that. Paulo Dybala and Mario Mandzukic will be the two strikers.

This game has huge implications for Milan: first of all, it’s a trophy and they have not lifted any of those in recent years, which is unusual for a club with such an important tradition. Secondly, Sassuolo leapfrogged them in the standings in the final two match days, which means that they need to win the final to enter the Europa League, which would be an improvement after few seasons without European competition. If Milan qualifies, they will go directly to the group stage, while Fiorentina will have to go through early play-offs and Sassuolo will stay home.

However, the last month or so at Milan under Christian Brocchi has been pretty awkward. The coaching change did not spark much improvement on the pitch and they had a couple of costly results for their sixth place hopes, like the 1-2 against Hellas and the 3-3 at home against Frosinone. In the last game against Roma, they looked in disarray. The potential and possibile Chinese takeover is dangling over everybody’s head, creating more chaos than security for now.

Brocchi, who seems an intense coach but has not managed yet to convey his tactical beliefs to the players yet, had a couple of tirades against the squad after the disappointing performances; We will see if he has managed to rile them up. He was appointed in because Mihajlovic was too defensive and did not play in a proactive way, but changes have been scarce on that front. As a matter of fact, the high offside trap has worked against them as their centre-backs are too slow to catch up, when beaten.

The coach is expected to ditch 4-3-1-2 for 4-3-3. The fact that they have not been able to find a good partner for Carlos Bacca is definitely a factor in the decision, but it is also a more defensive choice as Giacomo Bonaventura and Keisuke Honda, who will complete the trident, will try to contain Juve’s flank game. Mbaye Niang has recovered from a severe ankle injury, but he has yet to play so he will make at most, a second-half appearance: he has been pretty energetic this season and definitely their second best striker, but his effectiveness remains to be seen after being sidelined for two months.

They are set to be without the two starting fullbacks: Ignazio Abate is dealing with painful plantar fasciitis, while Luca Antonelli suffered a calf strain few weeks ago. Brocchi has tried Alessio Romagnoli on the left, but that did not work very well. Davide Calabria and Mattia De Sciglio are slated to start, with Romagnoli in the middle, alongside either Philippe Mexes or Cristian Zapata: Alex had a terrible game against Roma and should pay the price in this occasion.

Riccardo Montolivo is primed to anchor the three-man midfield, with Juraj Kucka, who had a great game against Pogba the last time but has underperformed under Brocchi, and probably the good soldier Andrea Poli. Andrea Bertolacci is in Brocchi’s doghouse after not living up to his €20 million price tag, José Mauri has a chance but the veteran is expected to come up victorious in this battle.

As mentioned, Mihajlovic was dispatched because his style was too passive: Brocchi has tried to reverse the course, but he simply does not have the horses to play fast possession football and changing a team’s identity is very difficult in only month, so there have been problems all over the pitch, especially in the defence. At times, they seemed to lack intensity and focus, but that could easily change in a high-stake game. 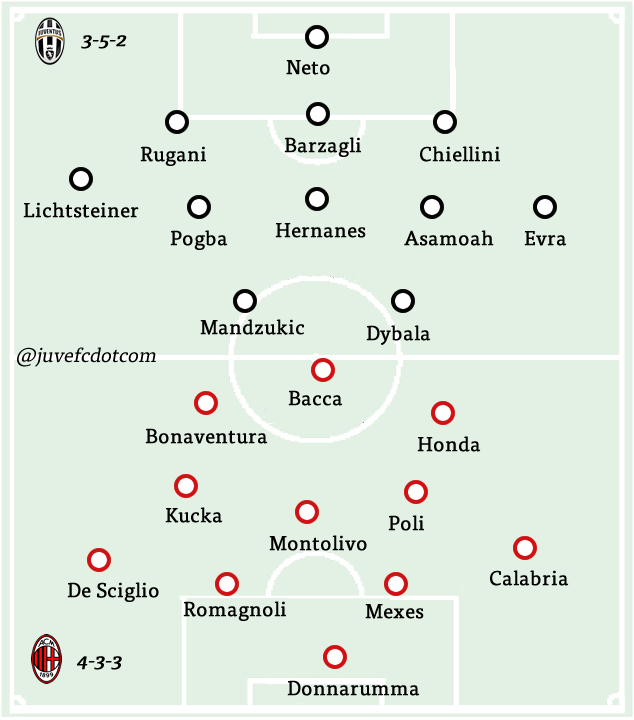