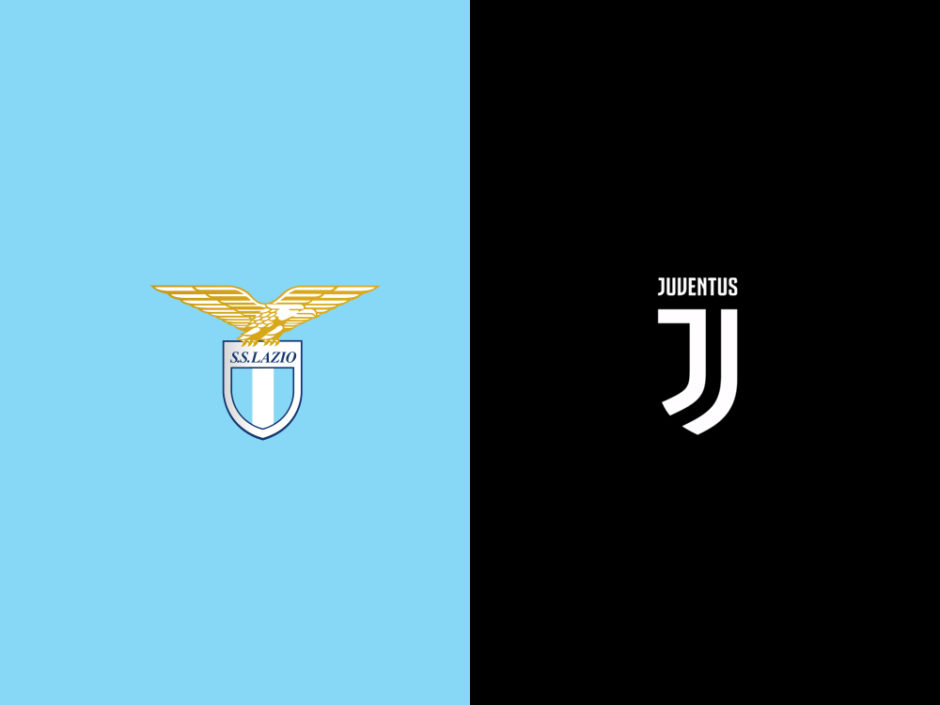 This eventful transfer window stops for a minute because it’s time for some official football: the Supercoppa Italiana is here, back on Italian soil and in its usual spot in the schedule, in the middle of August, regaining its original nature as a glorified friendly.

Juventus have had so far a very interesting reinforcement campaign, albeit not a complete one yet: one big piece is missing and some could argue maybe two or three. As far as I am concerned, I think the only white whale is the midfielder, but I am confident the management will be able to land one, even though it looks like they are scrambling a little bit. That probably means that their first target was unavailable because with big purchases, like Federico Bernardeschi and Douglas Costa, they laid the ground months in advance, pounced early and they simply ironed out the details of the transfer in the summer. Most of the names circulating are intriguing and the profile is clear: a big physical player who has decent technique; a perfect Miralem Pjanic partner.

The moves made so far solidified 4-2-3-1 as the main scheme and most of the resources were allotted in the attack: gone are the days of Stefano Sturaro and Mario Lemina playing as wingers. It is a more offensive approach, veering from the Italian way of prioritizing the defensive phase. They also built an extremely good bench, which will be able to turn matches around in a way that we had not seen in the past.

Gianluigi Buffon will have Wojciech Szczesny, arguably the top performer in this role in the past season, as his backup: Gigi will remain the starter in what should be his final full season, but he wil probably rest 5-6 times more. Bringing in the replacement a year earlier is a good idea and signing an experienced goalkeeper, instead of young up-and-comer, reduces the burden of being the heir of a legendary figure.

There are doubts on every level of the field. The newcomer Mattia De Sciglio is battling with Stephan Lichtsteiner to start on the right flank: the drop-off in quality from Dani Alves is evident and many are clamouring for a new fullback. Giuseppe Marotta & co. have been hesitant so far after inquiring about some good prospects. A couple of things are in play here: De Sciglio might not be great, but he is still very young and has shown flashes when properly motivated; Lichtsteiner is in final year of his contract; we already have an up-and-comer under contract in Pol Lirola, who is cutting his teeth at Sassuolo. So I could see the reasoning behind waiting another year to see if the Spaniard flourishes before making a splash in that position, where having two excellent interprets would be redundant.

The ideal scenario would be to convince Atalanta to let us have Leonardo Spinazzola a year earlier, which would allow us to cash in on Kwadwo Asamoah, who has an expiring contract and has received some offers. Spinazzola has played on the left, but should have no problem adapting to other flank considering that he is right footed. He would be primarily Alex Sandro’s backup, but if both Lichtsteiner and De Sciglio disappointed, you could have the option of trying him there. Juan Cuadrado could end up playing a bunch of games as fullback as well. Spinazzola is not Gianluca Zambrotta, but he could be a very useful player for the present and for the future, considering also that he is homegrown. I think the management is working hard on this plan, maybe including an investment on a prospect, say Diego Laxalt, and sending him in to Bergamo as a replacement.

The heart of the defence is another area of concern among fans and understandably so considering the shocking departure of a world class player like Leonardo Bonucci. Numerically, we could be fine with four specialists, if everybody stayed healthy. Unfortunately that is a big question mark with aging players like Giorgio Chiellini and Andrea Barzagli. It would be a gamble also from the quality standpoint: you would be betting on Daniele Rugani making the leap and on Benatia recapturing his Roma form. The solution could be at half way: start the season like this and seeing where you are at in January, before the truly gigantic games starts. But you may have to spend a buck more in the winter. As for the starter this Sunday, besides Chiellini it really is anybody’s game.

In the midfield, now deprived of Mario Lemina and Tomas Rincon who were astutely sold, waiting for a new arrival, the biggest news of the pre-season has been Claudio Marchisio returning to peak condition. That is a very welcomed development, especially in the event the management does not land a big name. Il Principino could start, either for Sami Khedira or Miralem Pjanic.

The new and improved line of attacking midfielders will be a jigsaw puzzle all year long. As for the debut, it looks like Mario Mandzukic is locked in on the left, with one between Cuadrado and Douglas Costa on the right. Paulo Dybala was recently given the historic number 10 and this is a big vote of confidence in a summer where Barcelona and Real Madrid have been on his trails and have openings in the attack. Despite the change of number, you could argue that a lot of pressure has been taken off La Joya’s shoulders in this offseason: creativity-wise, he was the guy in the attack last season, but in the upcoming one he gets to share those duties with two stellar playmakers like Bernardeschi and Costa. The happiest man might end up being Gonzalo Higuain, who is gearing up for a season full of sweet dimes.

Lazio have had a weird summer, marred by three thorny contractual situations: thanks to Claudio Lotito’s superb negotiating techniques, Lucas Biglia, Stefan De Vrij and Balde Keita all entered the transfer window with expiring contracts. They could not agree to terms with Biglia and Milan were quick to take advantage of the situation and acquire him for a decent sum. The same could be happening with the sturdy Dutch and the Spaniard and Juventus have sniffed around both. They could both end up staying and extending, but with twenty days to go before the end of transfer market, the situation is less than ideal because, if they left, they would have very little time to replace two huge pieces of the roster. Losing them for free next year would be a flat out disaster. In the midfield, they opted for Lucas Leiva, who might have a little less quality but fits the profile as a leader. Luis Alberto could be an interesting piece there down the line.

Simone Inzaghi seems more focused on 3-5-2 rather than on 4-3-3. On this front, they have signed Adam Marusic who is tailor made to play as right wing back and might make his debut on Sunday if he manages to beat out Dusan Basta this soon.

They have a couple of issues regarding the lineup. Felipe Anderson is dealing with some muscle fatigue and is unlikely to recover in time, but he is trying. UPDATE: Keita was slated to start, but he was shockingly left out of the squad list. Filippo Inzaghi hinted in the presser that he will field only players that “have the right face.” The Spaniard lashed out on Facebook after the decision, that was not based on sports reasons in his mind. We know that Juventus covet Keita and would very much appreciate the opportunity to sign him below market price, but Lotito has not caved yet. It will be interesting to see whether it will be Keita-or-bust as far as Juventus’ attack goes, considering how deep it already is and that Marko Pjaca is making strides in his recovery.

As far as this match goes, Inzaghi does not have many options for the attack: he will have to either force Anderson’s recovery or try a new approach, which would likely include Milinkovic-Savic and Luis Alberto as attacking midfielders, but at this a solution outside of the box or an attack with two pure strikers, inserting Felipe Caicedo, is possible. Without Anderson, it would also be pretty difficult to deploy other schemes.

Stefan Radu is dealing with some muscular problems as well and at this point he is behind Wesley Hoedt for the starting job as left centre-back, but he has been called up, so he still has a chance. Wallace should complete the department. No matter how they are spread on the pitch, the midfield will feature Marco Parolo, Milinkovic-Savic and Senad Lulic on the left. All very physical and sneaky players: if the coach manages to get them all involved offensively, they could be hard to contain since they could cover the whole width of the pitch. The starting striker will be Ciro Immobile, who will try to repeat his marvellous 2016/2017 season.

You can stream the game live via OZ.com  – Sign up here: https://www.oz.com/italian-super-cup 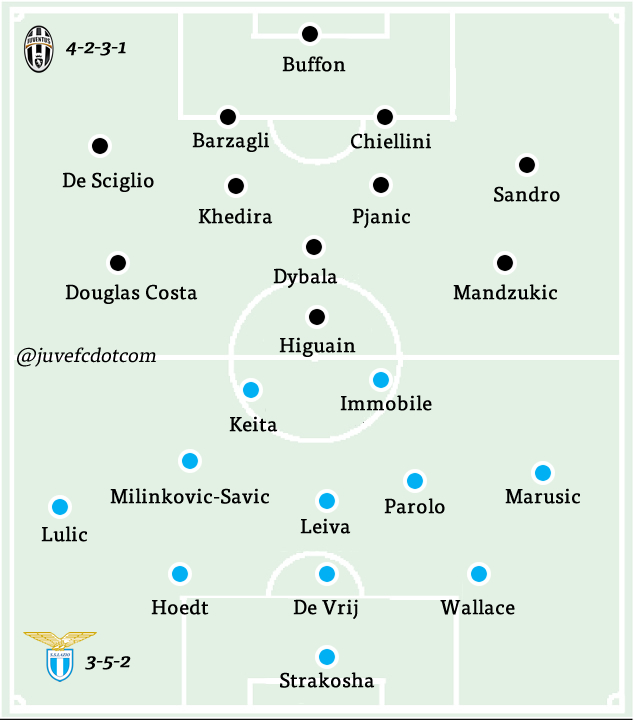 Four reasons why Allegri can still believe in Juventus comeback