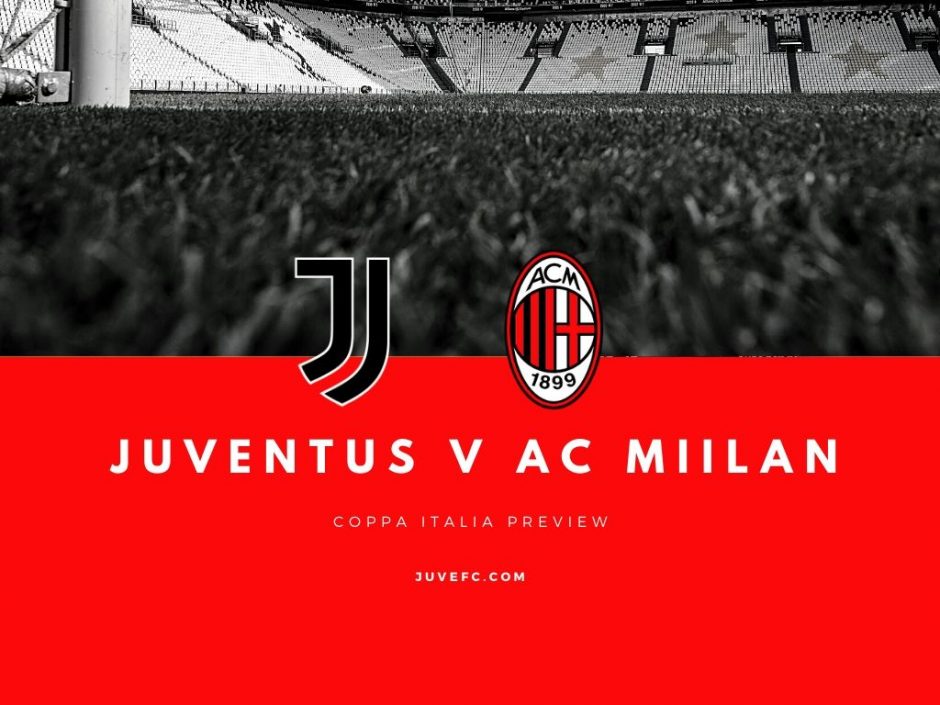 Someway, somehow, football has found its way back despite all the craziness that has been going on in the last few months, even if at times it looked like an uphill battle against a multitude of factors. Kudos to those involved for sticking with it instead of taking the easy, but to be honest pretty sensible, way out of shutting things down early. Considering what happened, let’s try to enjoy it without the usual acrimony, knowing it is still in danger of going away.

It is pretty interesting and weird that a trophy will be on the line, out-of-the-gate and, throughout the whole sprint during the summer, you have to wonder what the level of intensity will be after such a long break. It will be something different, but still better than nothing.

There weren’t any major injuries during the stoppage, but there are some routine muscular issues that will shorten the squad, at least short-term: it looks like Gonzalo Higuain is dealing with the most serious one, while Giorgio Chiellini and Aaron Ramsey are fatigued and highly unlikely to be risked. It is a bummer that the Welshman is constantly hurt because he was in a groove in March and sticking him as right box-to-box had started to bear fruit.

The dynamics in the midfield will be intriguing to watch in the next month and a half. It is no secret that the management is planning to move on from Miralem Pjanic for various reasons, first and foremost, this being the last chance to make a good buck selling him and there are a few rich teams that are interested; secondly, because he never quite took his game to the next level as expected with Maurizio Sarri at the helm. However, with such a packed schedule, the coach needs everybody, the rotation will be constant and Pjanic remains a key piece, although placing Rodrigo Bentancur there is a viable alternative.

The latest reports suggest that Pjanic will begin on the bench, like in the game against Inter, although the manager talked him up recently, so we will see what the final choice will be. Whether Bentancur can cover that role efficiently could very well determine the future transfer market strategies. I prefer him in a position where he can put his dynamism to better use, but anyway he brings a lot to the table no matter where he is put.

Without Ramsey, the spot on the right should be reserved to the grand return of Sami Khedira, who a recent article aptly deemed ‘much maligned by the fans, so appreciated by all his coaches’. There is no denying that the offensive punch he provides can be very useful, but his contribution in other areas is usually lacking and one has to wonder in what form he will be after so much time without playing. Blaise Matuidi should complete the line, but Adrien Rabiot will be another one under the spotlight in the remaining games, as his future is very much in doubt too.

Gianluigi Buffon is set to get the nod, with Leonardo Bonucci, Matthijs De Ligt and Alex Sandro shielding him. Sarri might opt to go with the heavy-hitters right away and field the Douglas Costa-Paulo Dybala-Cristiano Ronaldo trident which is, for all intents and purposes, the best possible solution in the attack, but for a number of motives, it has rarely ever been deployed. Should that be the case, Juan Cuadrado would play right back, otherwise he could be advanced and Danilo would fill in. 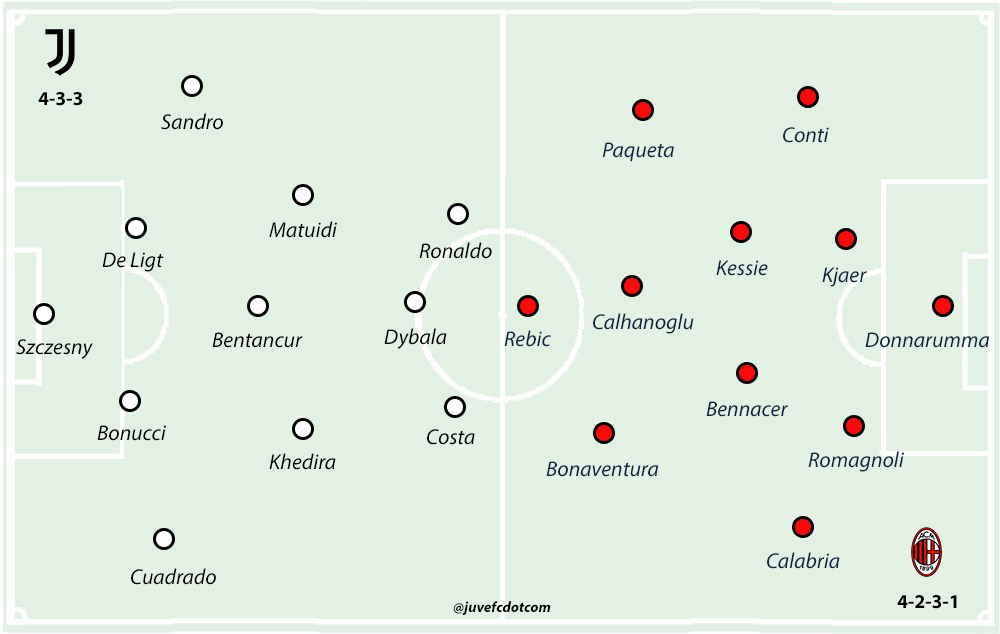 Even in their worst moments, Milan always seem to play Juventus tough, even though the Bianconeri have generally found a way to prevail in the end. The first leg was a small microcosm of that, as the Rossoneri controlled the pace for the majority of the match, but then where nipped at the post by a penalty and lost three indispensable players in the process.

The suspensions of Zlatan Ibrahimovic and Theo Hernandez take away two major playmakers, while the absence of Samu Castillejo removes the purest winger on the roster. It looks like Stefano Pioli is going with an all-midfield line up to fill the voids, with Ante Rebic, usually fielded on the left flank, as false-nine and a plethora of technical players supporting him: Lucas Paqueta, Hakan Calhanoglu, Giacomo Bonaventura and then Ismael Bennacer few metres behind.

It will be something fluid between a ‘Christmas tree’ (4-3-2-1) and the scheme they utilized in the final fixtures with good returns, 4-2-3-1. It would be a pretty resounding vote of no-confidence for the seesawing Rafael Leao, who is the closest thing they have to a striker available, but still appears likely to ride the pine at first.

The difference between not having a reference point and being toothless can be slim and, as a matter of fact, before Zlatan came to town they had trouble generating offence in consistent fashion. They will not have the long-ball option this time around. However, Rebic has grown immensely since January , then Calhanoglu and especially Bonaventura can be pretty sneaky and hit you cold turkey. Conceding would not be the end of the word, but it is obviously better to avoid it.

Barring the ugly collapse in the Derby and the surreal match with Genoa, they had done okay in 2020, turning the corner with the Swedish ace and the new tactic. Whether that can carry over after the stoppage and without its main protagonists, because Hernandez is a true difference-maker, remains to be seen. They might not get off the mat if they get stung early.

Davide Calabria will probably move to the left flank, with Andrea Conti playing as right back, with newcomer Alexis Saelemaekers as a possible alternative. Simon Kjaer has an edge over Mateo Musacchio to flank Alessio Romagnoli in the heart of the defence, while Franck Kessie will partner Bennacer in the midfield.

It will be a quality-filled formation that might be more unpredictable than usual, but, aside from Rebic, it does not have much pace to put together counters after counters. They will have to try to pull the strings to get something going but, fans or no fans, that is usually difficult at the Stadium and can have its counter-effects.

Maurizio Sarri: ‘I spoke to Pjanic’