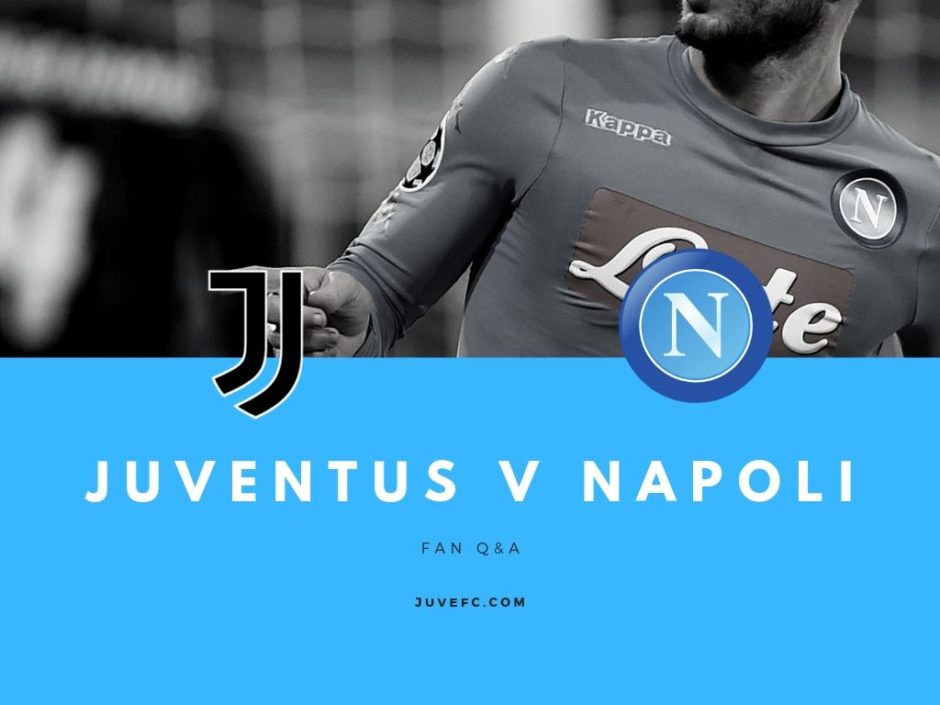 Juventus will be without Giorgio Chiellini and Maurizio Sarri when they host Napoli for their first home game of the new season and with a tricky match in prospect, I put your questions to Napoli blogger Aaron.

1. If Sarri were to attend the game (unlikely) what kind of reception do you think the Napoli fans will give him?

I think most fans respect his period managing Napoli, but wouldn’t be too enthusiastic seeing him. Seems unlikely that he would get a warm welcome. It does sting a bit anytime we lose someone to Juventus.

2. Is there any final chance of Napoli getting Rodriguez?

At this point, it’s unlikely Napoli sign James. Most fans (myself included) would be overjoyed, but I’m not optimistic that De Laurentiis pulls the trigger and goes all out to sign him.

3. How excited are you about the arrival of Lozano and what are your expectations for him?

Lozano is an interesting signing. I love his work rate, and he’s just the sort of explosive and dynamic winger that could take us to the next level. I’m expecting he’ll start splitting time with Callejon, but ultimately win out a starting spot by 2020. Lozano is definitely a long-term signing, and I think it will take him a few weeks to get settled but ultimately I expect him to perform to the level he’s capable of. I don’t have a numerical goals/assists target for him, but I’m expecting some top performances.

4. How good is Merten’s ability to perform in the box without the ball?

Mertens has always been lively off the ball, no matter where he’s played. His transition from rotational winger to explosively scoring as a striker is one of the more impressive ones I’ve seen in recent years. One of the aspects of his game that sets him apart is his movement, he’s so good at losing his man in the box or running onto passes through the channels. Hopefully that comes up big against Juventus.

5. What are your feelings towards Ancelotti so far?

I’m a huge Ancelotti fan, and the calming presence he brings to the club. Nothing seems to faze him, and he’s not afraid to tinker with the XI. His style seems a bit more reasonable and receptive to change than Sarri, who was a lot my rigid in his style at Napoli. Of course, there’re benefits to both of their styles but I like to think that Sarri laid the framework for Carlo to take the squad to the next level. Hasn’t happened yet, but that’s the expectation.

6. Do you think he has to win something to be considered a success?

He does. A league title would cement Ancelotti’s time at Napoli as a success, as would a European Cup win. Juventus have enjoyed a stretch of pure dominance over Serie A, but few will remember a 2nd place finish. I certainly won’t be celebrating finishing 2nd, but Carlo will go down in history for Napoli fans if he can be the man to upset Juventus’ dominance.

7. What do you think Sarri will achieve at Juventus?

I believe Sarri will win the league title in 2019/20, maybe stay a couple years after that with more domestic success. However, I don’t believe he is the man to lead Juventus to their desired Champions League title. Of course, managers can adapt, but his inflexibility didn’t bode well for Napoli in European competitions. We’ll see if that changes at Juventus.

8. Do you think this Napoli’s best chance to win serie A?

I’d like to think this isn’t our best chance, because of how much room for improvement our squad has. Players like Fabian, Lozano, Meret, Zielinski, Elmas have tons of potential. Adding a world-class striker to the equation in the future could make all the difference, provided we keep Koulibaly. Our chances for a title rest on those pieces. Mertens and Callejon are both 32, so we’ll see what Napoli’s attack looks like in a year or two.

9. Which one Napoli summer signing is the most important in your opinion?

Has to be Manolas. Lozano was a great addition but in Manolas Napoli are getting a defender at the height of his game who seems, at least on paper, to be a perfect match to complement Koulibaly. I believe they’ll be regarded among the best defensive pairings in the world at the end of the season.

10. What are your thoughts on the opening weekend’s 4-3 v Fiorentina?

There’s a lot to unpack in this match. First and foremost, I was disappointed to at both the penalties awarded. Neither should have been allowed to stand, and I am interested to see how officials can adapt in the post-VAR age when wrong decisions are still being made on the regular. As far as our performance, there was a lot of rustiness to shake off, specifically in defence. But Insigne was on fire, Callejon and Mertens had good showings as well. Zielinski performed well from a deeper position, I’m sure that’s not the last time we’ll see him operating from there. I was also impressed by a few of Fiorentina’s players, Sottil gave us problems the whole match and Castrovilli looks like another solid addition. All things considered, it was entertaining and great to start the season with a win.

11. Your combined Juventus and Napoli XI?

There’s some excellent players who missed out and are deserving, for both squads. Allan was hard to leave out, right now you can take your pick between him and Fabian – one of the two have to be in. Di Lorenzo is a controversial addition, but he shined for Empoli and I think he’s regarded as one of the best right backs in Italy come the end of the season. We’ll see what happens to Dybala – despite the rivalry, I can acknowledge how talented he is.

12. Prediction for the game?

I’m going with a 2-2 nervy draw. A brace from Ronaldo, and goals from Insigne and Manolas. Good luck, and Forza Napoli!