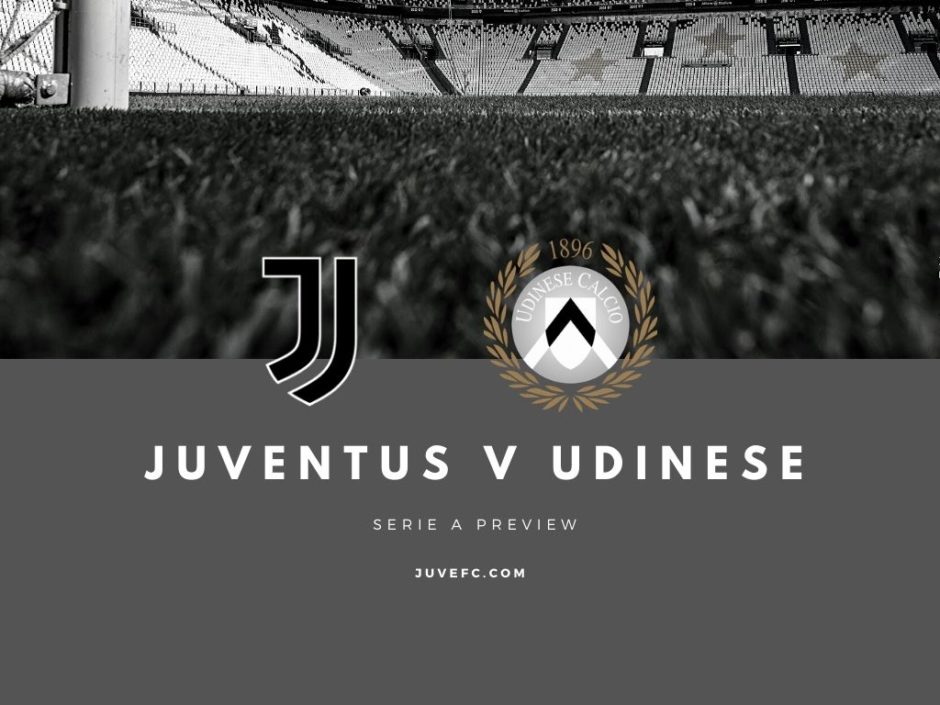 Juventus were handed their first loss of the season by Lazio last week and, while it is unfortunate, it should not be seen as a cataclysm. First of all, Inter are still within reach and, while extremely solid, they’re hardly a juggernaut. More importantly, the Bianconeri came out with the right spirit, controlled the proceedings for most of the first half and deservedly got the lead.

After that, every single turn of the contest went against them, from Rodrigo Bentancur getting hurt to a fluky goal on a set piece, from Paulo Dybala missing a sitter to Juan Cuadrado getting an avoidable red card.

It just was too much to overcome against a quality, red-hot opponent that may be the best equipped in Italy in taking advantage of the opportunities to counter-attack. The Old Lady, who even managed to pin back the enemy late on despite the dire situation, had no choice but to attack recklessly and down to ten men, the adversaries pounced. C’est la vie.

While the match was wonky, it does not mean that there are not systemic issues that needs addressing. For instance, time and time again, corner kicks have led to quick fast-breaks for the opposition, so to prevent this, the defence in such situations has to be fixed and the remedy should not be hard to find.

More worryingly, the midfield is struggling to take over matches and the light went out once Bentancur subbed off. The injury is fortunately minor, but we still should not be that dependent on just one player, even as brilliant as the Uruguayan defender has been lately. Emre Can is bringing nothing to the table and Blaise Matuidi is just a complementary piece. Reinforcements are needed in a hurry and hopefully Aaron Ramsey and Adrien Rabiot can regain an acceptable level of conditioning soon.

That leads to the broader discussion as to why it is ludicrous to question the coach for the most recent underwhelming stretch, as Juventus right now simply do not have the horses to pull off the style he desires. You need the midfield to pull the strings if you want to command matches and the squad has been unable to do that lately, as Miralem Pjanic has been in a funk for a while. The technical drop-off compared to the replacements is just too wide to hope to see some Sarri-ball without both Ramsey and Douglas Costa, without whom the ceiling of the team lowers dramatically. The positive aspect is that that help required is in-house, the discouraging part is that we do not when it is going to be able to deliver fully due to repeated ailments.

Obviously, one could could argue that the midfield was not constructed properly and should not have been so reliant on two newcomers from different leagues and one with a history of frequent injuries. Sami Khedira and Blaise Matuidi were supposed to be bridges between the two reigns before making way to all-finesse formation, but the transition has been too slow and the German veteran, who often strolls around the pitch, but at least is not as hurtful as the current version of Can, is out for some time.

The squad then went to Leverkusen with the right face and there has been a reassuring amount of serenity throughout the week that could lead us to believe that a strong finish of 2019 is very much possible. Bentancur recovering quickly averts a crisis in the midfield and assures that they will not have to rely on two players that can not be fully trusted at this stage, Can and Rabiot, even though Pjanic’s suspension is always a big deal. It would not be shocking to see Rabiot used out-of-position on the right-hand side to have more technique on the pitch. Danilo and Mattia De Sciglio have been fine in their most recent outings and one of the two will fill in for Cuadrado.

The talk of the week pertained the star-studded trident the coach decides to deploy from time to time, but it would demand the absolutely right kind of match-up for it to be an option from the jump. Even though Dybala likes to peel back to get the ball, the dip in work rate with all three top strikers together is pretty dramatic and the Old Lady is not advanced enough its tactical evolution to keep the ball and dominate for the entirety of games.

There are some breaks where the team has to defend and it is hard to do it properly if three players do not fully participate. As frustrating as he has been, Federico Bernardeschi still provides a precious tactical contribution and Sarri already barely tolerated having Costa there. And it is always nice to have such a potent option when you desperately need it. That being said, this might be one of the rare fixtures where it may be sustainable and the Bianconeri will rarely field a midfield that is as stout as the expected one again. 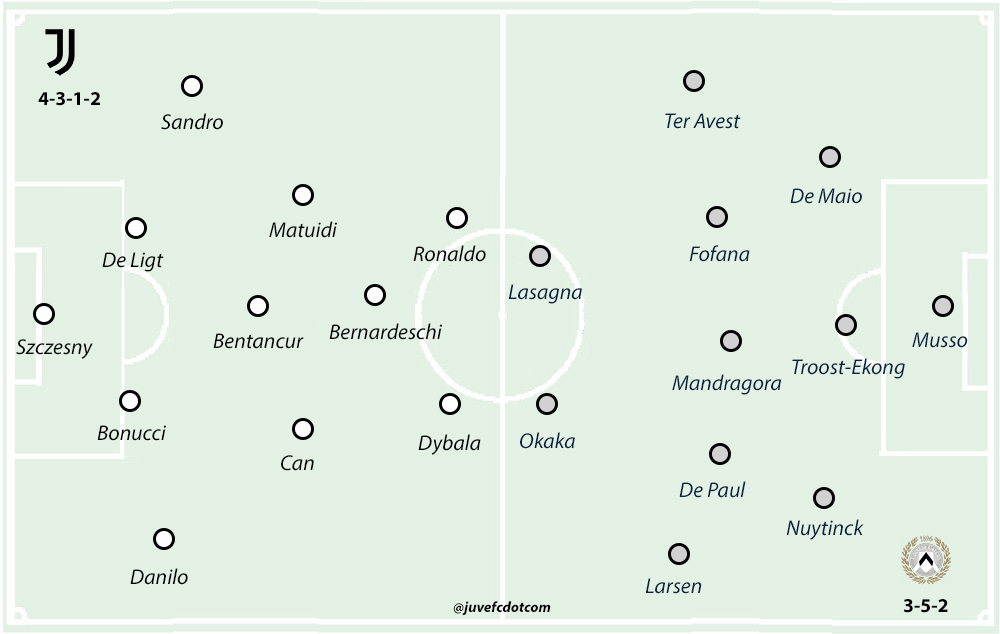 Udinese have been aggressively average so far and the coaching change from a few weeks back has not really brought that impressive of a spark. They sit four points above the relegation zone with just four wins in the season and all indications are they would be perfectly content if they kept that position for the whole campaign. Gone are the days of them unearthing talent after talent and challenging for more prestigious places in the standings, as the ownership has switched their focus to the more profitable Watford.

They do still have some intriguing pieces, but they are no longer the factory of obscure South American prospects they used to be. Their two best players are very well-known and actually starters for Argentina: Juan Musso and Rodrigo De Paul. The goalie has been flashy and reliable from day-one, while the midfielder has been pretty inconsistent this season, as it often happens when somebody is almost sold during the summer but ends up staying. His numbers are down also because he almost exclusively plays as box-to-box now, but he is more involved in the build-up there, which is critical for them.

While keeping the back-bone of the team intact, they brought in some new pieces during the summer. The centre-back Rodrigo Becao had a strong start, but he has been shaky lately and it is not certain he will be in the XI in this one, with Sebastien De Maio possibly replacing him. Mato Jajalo from Palermo has been a bit of a surprise as they do not lack midfielders, but he has won the job as anchor right away and has been very valuable. However, he is hurt this week and will be replaced by either Seko Fofana, with Rolando Mandragora switching to pivot, or by Wallace, who has similar traits. Ken Sema, who has probably been their best addition at left wing-back, is iffy too, while the muscular Ilija Nestorovski will probably make way for Kevin Lasagna, who is tailor-made for this kind of match. They managed to bring back Stefano Okaka, whose huge frame and ball-protection are always a handful for defenders.

The assistant Luca Gotti was promoted after the ousting of Igor Tudor and their approach has not changed: they welcome the pressure with their 3-5-2 and try to counter as much as possible as Lasagna is one of the finest specialists around and De Paul, Okaka and Fofana can also keep up and do some damage in open spaces. It is an area where Juventus have had difficulties, and the recent domestic match is a major red flag, so they will have to pay closer attention to the preventive coverages. Despite the robust scheme, their defensive stats are paltry, so it should not take a 90-minute all-out assault to perforate them.

They have three options to replace Sema, with Jens Larsen likely moving to the left wing: a super conservative one with Nicholas Opoku, a very aggressive one with Ignacio Pussetto and a middle-of-the-road one with Hidde Ter Avest, which is the likeliest. Fofana showed well in the last game and will probably get the nod again, although Walace is certainly in the mix.

Fofana is a bit errant on the pitch, but he further adds to their tremendous physicality. Samir is slated to be out, but the new coach had already replaced him with Bram Nuytinck as a regular. Rodrigo De Paul is a little nicked up but should play through it, otherwise they can either trot out a super muscular midfielder or Antonin Barak to occupy the role of offensive-minded midfielder.

They have had a lot of trouble scoring so far, just ten goals, which is a direct correlation of their overall philosophy and the drop of production of their key playmakers such as De Paul, Mandragora and Larsen and Okaka, while he is a useful massive presence, has never been a very prolific scorer. If you take away their main weapon, they will struggle to get things going offensively.

Emre Can for Leandro Paredes?