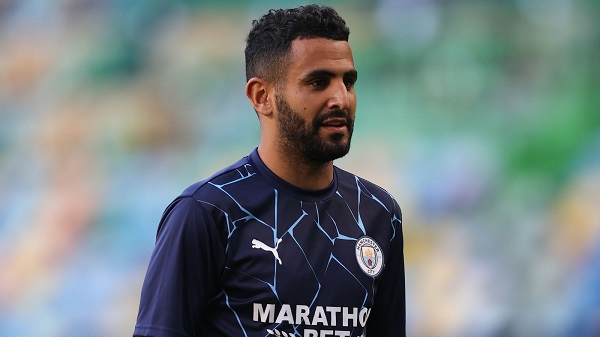 Juventus has been linked with a move for Manchester City attacker, Riyad Mahrez ahead of the next transfer window.

The Bianconeri will keep strengthening their squad in the next transfer window as they look to keep Max Allegri’s side competitive.

Some players will also leave and there is uncertainty about the future of Alvaro Morata and Paulo Dybala at the Allianz Stadium.

Fichajes.net claims they have an interest in Mahrez who has been so instrumental in City’s recent successes.

The Algerian could become one of their discards as the Premier League leaders prepare to launch a huge bid for Borussia Dortmund’s Erling Haaland.

The report claims Juve is looking to add more quality to their squad and they see Mahrez as a technically good player that can deliver top performances for them.

He would form an exciting front-three alongside Dusan Vlahovic and Federico Chiesa.

Mahrez is one of the finest dribblers in the world, and that skill sets him apart when he is on the pitch.

Juve needs someone as technically good as that in their current team and he would be a solid replacement for the outgoing Dybala.

However, he would not come cheap because City doesn’t have to sell players and will want to get the best price for any of their stars who want to leave.

Juventus is considering the return of their legendary striker

Report – Juventus set to cash in on midfield flop