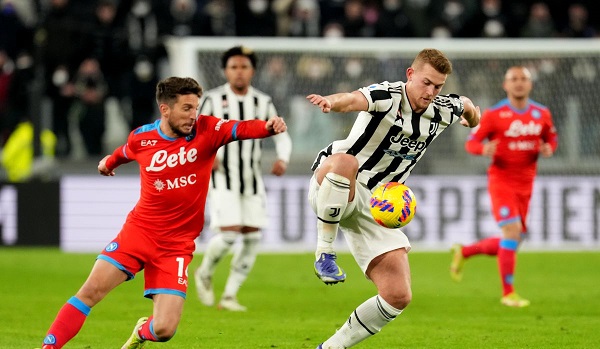 Juventus were robbed of a penalty against Napoli, Italian media outlets reckon

Juventus should have had a penalty in the first half of their match against Napoli yesterday, some reports claim.

The Bianconeri earned a 1-1 draw against their opponents who took the lead in the match.

However, Dries Mertens appeared to handle the ball in the visitors’ penalty box in the first half.

Juve wasn’t given a penalty by the referee, but Italian media outlets including Il Corriere Dello Sport, La Gazzetta Dello Sport and Tuttosport claim Juve should have been given a spot-kick, according to Football Italia.

That never happened, and the Bianconeri lost two valuable points in their bid to start this year in fine form.

In the second half, Matthijs de Ligt appeared to have tripped Giovanni Di Lorenzo in the Juve area and Napoli players wanted a penalty.

La Gazzetta Dello Sport and Tuttosport didn’t think it was worth it, but Il Corriere Dello Sport says it was a penalty.

Refereeing is one of the hardest jobs in the world and we sometimes forget that the officials are also humans like us.

The game’s referees used his judgement to determine certain situations and his decisions will never be accepted by everyone.

Juve also shouldn’t need penalties to score goals and win matches. Scoring from open play has been an issue for the team in this campaign and that must be fixed sooner than later.