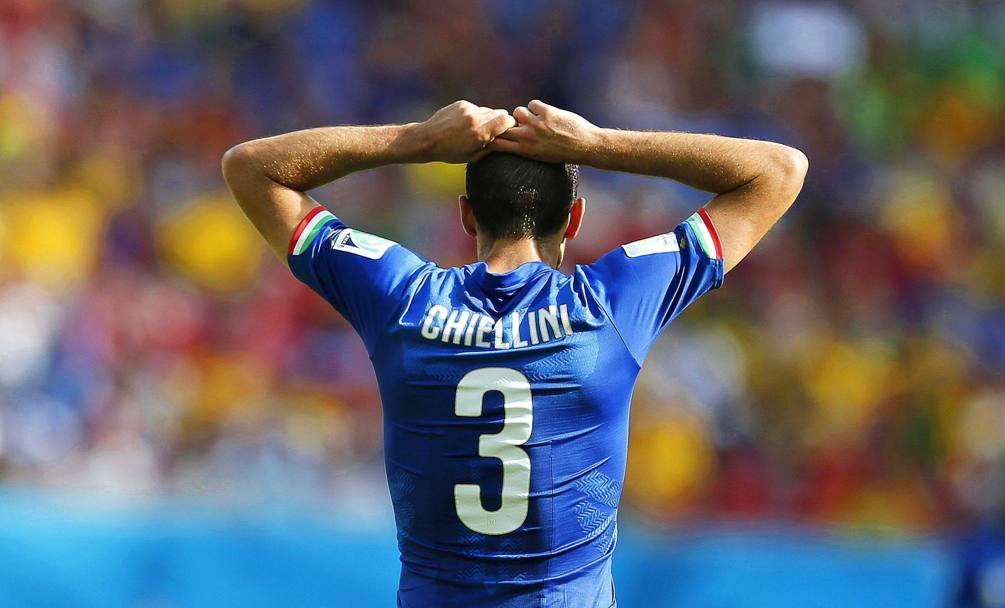 Italy lost the second game of the group stage, confirming his struggles in the second matches of competitions: they haven’t any of them won since the European Championship in 2000. A pretty uneventful match, which was all in all well controlled by Costa Rica.

It feels like Italians weren’t prepared for the opponents’ aggressiveness and energy. Costa Rica proved to have much more stamina than the Azzurri. But they also showed a lot of application and their defensive schemes worked to perfection and nullified a toothless Italian side, which shot only four times on goal, being dangerous only in two occasions.

Italy produced the lone two good chances in the first half: Pirlo served a beautiful long ball to Balotelli, but unfortunately Mario wasn’t able to deliver a proper lob. Few minutes later, Balotelli attempted a shot from just outside the box, but it was central.

Once again, Italy conceded on an action that started from the right and was finished from the left, even if, besides Barzagli, all the elements of the defense changed position. After 44 minutes, Abate let Diaz cross without contesting him, Ruiz slipped between Chiellini and Darmian and beat Buffon with a precise header that kissed the bar.

Italy tried to put up a siege in the second half but they never managed to attack insistently. Balotelli was too lonely up front. The continuous tactical adjustments of Prandelli, even though some of them made sense, confused the players rather than solving the enigma that was Costa Rica’s defense.

It felt like, towards the end of the game, many player were trying to score with solo runs instead of relying on the team play, which is Italy’s best, and perhaps only, weapon. The sole notable scoring chance in the second half was a Pirlo free kick, parried away pretty easily. Costa Rica had more energy and more focus throughout the whole game.

Let’s come down to our guys.

Buffon returned to the lineup after missing the first game because of an ankle and knee sprain. He looked a bit rusty at the beginning of the game, missing a ball in the air, but no damage was made. He saved a good effort from long distance and looked more at ease as the game went on, but he wasn’t called to duty a lot. He isn’t at fault in the goal.

Barzagli wasn’t supposed to start up until the early afternoon when the news that he had recovered from a minor malady came out. I think he was the best man in the defensive line, closing well the spaces and properly controlling the opponents. As usual not flashy, but solid.

Chiellini had a poor performance, definitely his worst game this year. He looked flustered at times. He was lucky that one of his tackle didn’t result in a penalty right before Costa Rica’s goal. He could have done better on the goal, he didn’t exactly lose his man, but he should have identified the threat earlier and prevented Ruiz from having a clear-cut opportunity to score. On a couple of occasions, he was superficial. He improved a little when Italy was all in attack and he had to chase down opponents on the counter.

Claudio Marchisio was once again fielded on the left wing, but this time it looked like he had more freedom to move around the pitch. His effort is not in question, but he doesn’t look dangerous at all in that position, he can’t cut between the defenders because he’s more marked than he usually is. He was bounced around the pitch in the second half because of the continuous tactic’s change. Generally, the off-the-ball movement by Italy looked insufficient.

Andrea Pirlo was the mastermind behind Italy’s greatest chance but after he drowned into Costa Rica’s space crowding strategy too. The lack of targets for his long balls hurts him and he just wasn’t in sync with the others, which lead to many offsides. I don’t think he defended well either and he didn’t look commanding with the ball on his feet, he was tentative at times. In the second half, he didn’t have many touches because of the entrance of multiple offensive players.