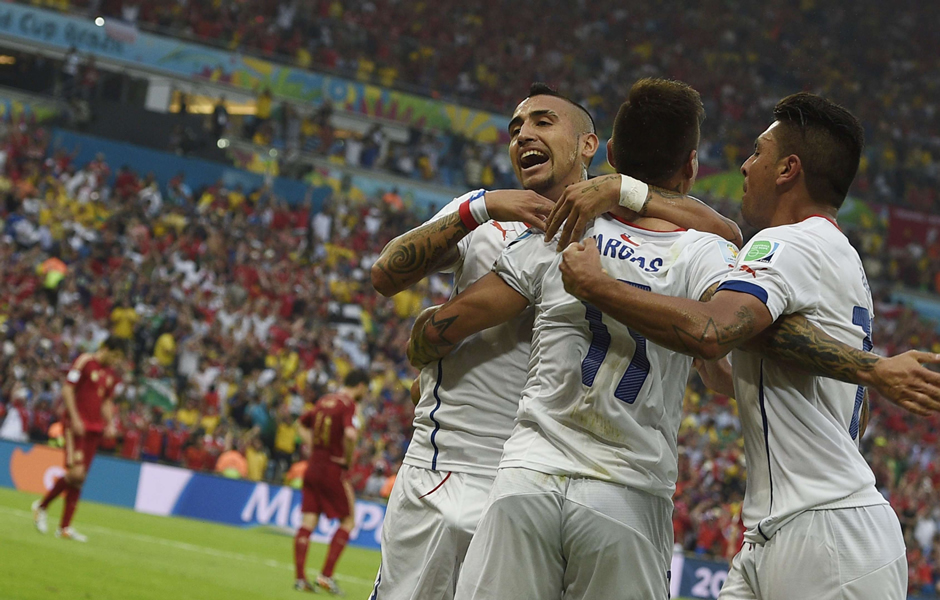 An utterly fearless Chilean display and a thoroughly lackluster performance by the reigning champions bought Spain’s era of international footballing dominance to an end. What better place for it all to end than the Maracanã; arguably the greatest theatre in the footballing world. The World and European champions were the first side to leave the 2014 World Cup, their first exit from a major tournament in eight years.

The pace and tempo of the game was set from kick off with Chile dominating early parts of the game. Aránguiz, Arturo Vidal and Alexis Sanchez combined perfectly down the right, getting forward at every opportunity to pile pressure on Alonso and Alba. Chile made their early possession pay when Aránguiz cut the ball back to Eduaro Vargas who took one perfect touch to manoeuvre past Casillas and slot home perfectly. It worth noting, Arturo Vidal played a key part in the build, holding onto the ball before bringing Aránguiz into play.

Spain were out of ideas, utterly lost against a Chilean side that were aggressive in winning back possestion, fast in their counter attacking game, and perhaps most importantly, a true collective. Iniesta tried to bring Spain back into the game, but his teammates already looked defeated. Alonso made some reckless challenges along with Busquets and the only moment of note was a Diego Costa shot into the side netting.

Sensing the momentum was with them, Chile did not rest and moved quickly to capitalise on Spain’s lack of creativity by pushing forward into the final third, creating space on the flanks and in the middle of the pitch. The contest was over just before half time when Alonso made a poorly timed tackle on Sánchez who took the free kick himself. The high-swung ball was punched out by Casillas but fell straight in front of Aránguiz who cooly slotted home to put his side two nil ahead.

Spain bought on Santi Cazorla, Fernando Torres and Koke in the hopes of creating more in the centre of the pitch. Iniesta found Costa near the penalty spot but his shot was charged down. Alba shot wide while Ramos curled a free kick that Bravo elected to punch away which almost cost them. Costa managed an overhead kick which flashed across the face of goal but Busquets at full stretch steered the ball wide of the far post.

Viewing the game purely from a Juve angle, it was hard not to be impressed with Arturo Vidal. Just 6 weeks ago, he was recovering in hospital and a doubt for the World Cup altogether. His recovery to force himself into the game against Australia was as telling as his reaction at being substituted. His performance against Spain was befitting of his reputation as one of the best midfielders in the game today. He was tenacious and tireless throughout, somehow managing to last almost the entire 90 minutes. Dogged defending and supporting runs from midfield made all the difference for Chile, allowing them to find space almost anywhere on the pitch.

Mauricio Isla had a typically ‘Isla’ type of game. He pushed forward at every opportunity but failed to make any of those runs count in the final third of the pitch. While not spectacular he certainly was solid and dependable.

Reading the reactions this morning, the focus seems to be on Spain with many calling it the end of an era and the death of Tiki-Taka football. All that takes away from the Chilean performance. It was a victory not assigned to any individual moment of brilliance, but rather the display of a true collective; A team in the truest, purest sense of the word.