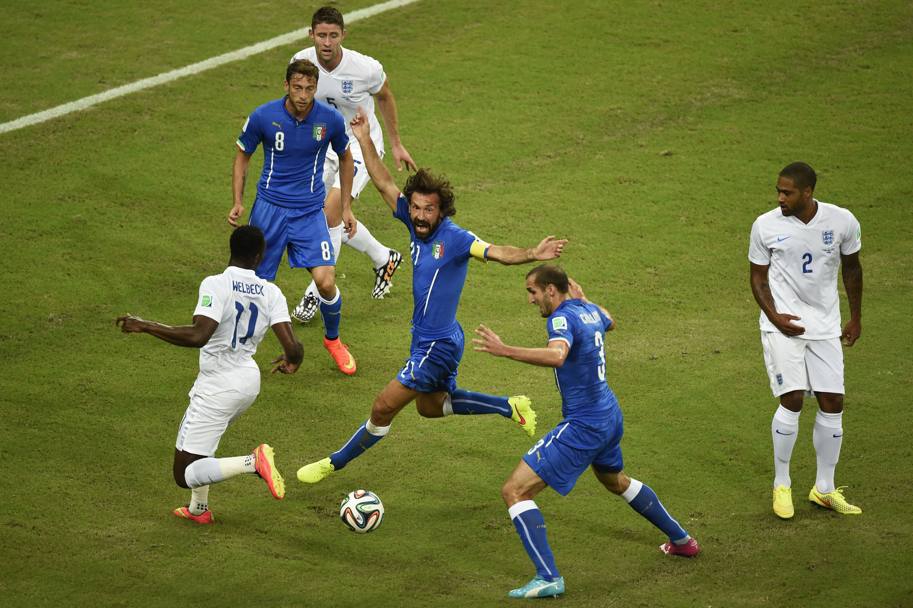 Last night, Italy beat England, putting themselves in a very good position in the group considering also the surprising defeat of Uruguay against Costa Rica. An enjoyable game played at very good rhythm, where England’s young guns tried to defeat Italy’s experience, but came up short. A tie would have been a fair result too, but Italy was sharper in taking advantage of the chances they created.

England seemed to have the upper hand in first 15 minutes or so, catching Italy’s defense by surprise with their quickness and long-range shooting. Italy wasn’t playing badly either, sustained by the very good performances of Darmian and Candreva on the right flank, but didn’t look as dangerous as the Three Lions.

However, Italy stroke first. After 35 minutes, on a corner kick, Pirlo surprised everybody with a magnificent dummy, opening the room for Marchisio and for a thunderous shot that beat Hart and died in the right bottom corner. England maintained the composure and two minutes later hit back with quick action on the right side that caught Italy’s defense out of position: Rooney assisted Sturridge for an easy goal.

Italy had a very promising spurt at the end of the first half: Balotelli tried to score a gem from an angled position with Hart outside of the goal, but Jagielka cleared it on the goal line and then Candreva hit the post from in close a minute later.

Italy carried the momentum in the second half and scored what proved to be the game-winning goal after five minutes in the second half. Candreva worked the ball very cleverly on the right flank, not settling for the first crossing opportunity but waiting for Mario Balotelli to free himself in the box. The cross was on target and unreachable for England’s CB and Mario headed it in.

In a classic Italian fashion, Prandelli’s side sat back letting England attack. England had three good chances with Rooney from outside the box (wide), with Ross Barkley on a one on one and with Baines on a free kick (saved by Sirigu). Inserting Thiago Motta for Verratti and Parolo for Candreva helped Italy close the room in the defense and on the flanks. Immobile didn’t have many opportunities to shine, but his substitution shows that Prandelli trusts him.

Definitely not a bad performance from England, Sterling in particular looked very good and they have a nice combination of attackers. They were unlucky not to grab a tie. However, the midfield was outnumbered and outclassed by Italy, Henderson and Gerrard were not enough to stop Verratti, De Rossi and Pirlo.

Let’s see how our guys did. Buffon didn’t play because of an ankle sprain. He hinted on a social network that he might miss the whole World Cup, but it’s not true. Prandelli said he will be ready for the next game, which will open a never-ending debate in Italy: Sirigu or Buffon? Sirigu did well between the posts but missed a couple of balls in the air when exiting. Buffon is one of the best goalkeepers and leaders ever and he should always play when fit. Many would pick Sirigu, but to me there shouldn’t be a debate at all.

Barzagli isn’t in top form yet but looked promising and showed good signals ahead of the rest of the comepetition. The most dangerous action came from the left side of the defense. He made a miraculous sliding save in the first half that prevented Sturridge from scoring. He was solid and poised as usual, but not as quick as he could be.

Chiellini was fielded as left-back and this is always a terrible decision. He’s not a menace on the wing and he also always feel the need to make a play when he passes the midfield. This usually ends badly because of his unpolished feet. Defensively, he was decent in the first half and very good in the second half, where he locked down that side of the pitch and made his presence felt.

Pirlo stood like a giant on the pitch. He wasn’t pressed and he basically did what he wanted, finishing the game with a 95% pass accuracy on more than 100 attempts. The lack of players that attack the room behind the opponent’s defense limited his dangerousness, but he was clearly a reference point in the middle. Verratti wasn’t as brilliant as in the friendly and often limited his plays to passing the ball to the maestro. He hit the bar in the final minutes on a gorgeous free kick. Playing this well in his 46th game on the season is something truly special.

Marchisio was fielded as left-winger, which isn’t a good idea either. His work rate was outstanding, but he is not an offensive threat in that position. As always, though, he put his heart on the pitch and scored the first goal on a set piece situation with a majestic stroke from distance.