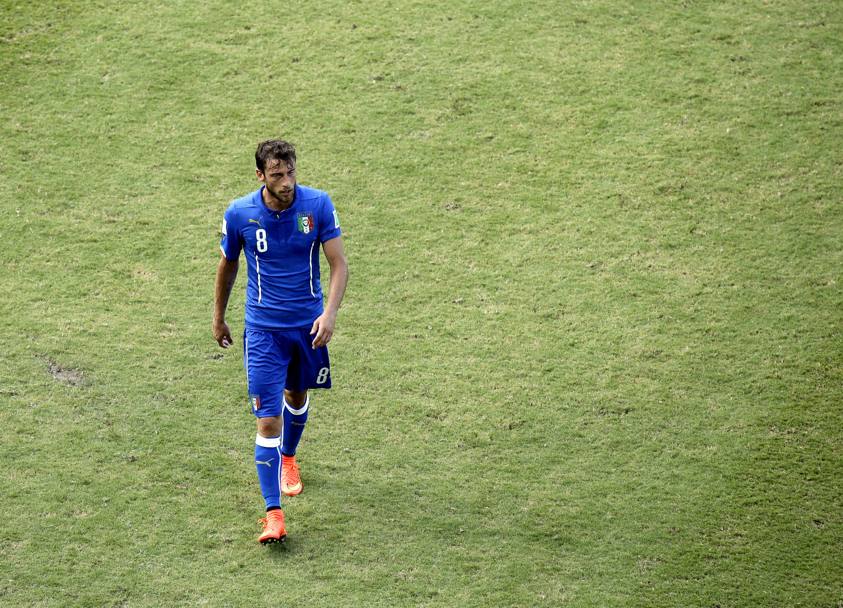 Italy lost against Uruguay and was eliminated for a competition. For the second game in a row, Italy was unable, not only to score, but to be seriously dangerous in attack. Prandelli didn’t hide and resigned immediately afterwards: it’s was a classy move, but it’s undeniable that he’s at fault for many things: tinkering with tactics without being able to find a good one after Montolivo went down (4-3-3 looked good, but…) and without building a ‘best XI’; bad call-ups, too many midfielders, not enough strikers; inability of managing a group that never jell and of motivating the player; poor game plans; horrendous lineups and substitutions (Parolo for Balotelli…).

It was not a good game at all: very nervous and physical. Neither team attacked convincingly in the first half. Italy obviously played for the tie and did a fine job for most part of the game: all in all, Uruguay had only one clear-cut chance on open plays and it came after a lucky ricochet.

While the players were busying harassing each other, the game went on without many scoring opportunities: Italy couldn’t hold the ball in the final third, Suarez and Cavani were somehow neutralized by Italy’s crowded defense. The game changed after 59 minutes, when Marchisio was sent off for a hard tackle on Rios.

Moreover, ten minutes later, Immobile cramped and was subbed off, therefore Italy was deprived of the only weapon they have: the counter-attacks. Italy parked the bus at the 70th minutes and, with that much time to go and facing a quality opponent with outstanding strikers, a goal was in the air. It arrived in the 81th minute, with the usual suspect Godin heading in (or shouldering in) a corner kick. Italy wasn’t able to build a reaction and Uruguay deservedly advanced.

Gianluigi Buffon had a solid game. He wasn’t tentative exiting the goal, he quarterbacked the defense yelling at everybody, he made a monster save when Suarez got free to shoot on a one-on-one situation. Will he lead the team to the next European Championship? Time will tell, but he probably will.

Andrea Barzagli, Leonardo Bonucci and Giorgio Chiellini had a very good game. Limiting such a talented team to a couple of chances is quite an achievement. Barzagli looked a bit off in the first minutes, but then he recovered and didn’t have problems controlling the opponents for the rest of the game, often anticipating them and reading well the situations. Bonucci didn’t make mistakes, didn’t misplaced many passes and looked very focused from the get-go, a big time performance from him. Chiellini battled all the time with the opponents, delivering knocks and getting hit as he usually does. He had a couple of odd moments but he looked much better than the Costa Rica game. The defensive trio was steady.

Pirlo played his last game with Italy and it’s tough to see him go after such a disappointing result. He played in his usual deep-lying position, he stepped up and played fairly good. However, I was expecting a bit more from the connection with Immobile, who can attack the room behind the defense. The striker didn’t have a very good game. You can feel Pirlo’s aura when he’s in the game, he’ll be sorely missed.

Claudio Marchisio finally played in his natural position in the midfield. He provided good energy and hustle, he tried a couple of times to attack, but without positive results. He was sent off for the first time in his career: the tackle was bad, right on Rios’ shinbone. We have seen worse tackle, but the red card wasn’t that exaggerated: you definitely can’t put the referee in the condition to make that call, he should have been more careful.

Martin Caceres was fielded as LCB and he had a very good game. Gritty, energetic, he played with a lot of passion. Italy didn’t attack much on that side (or at all), but his tackles were precise and he controlled his area very well.