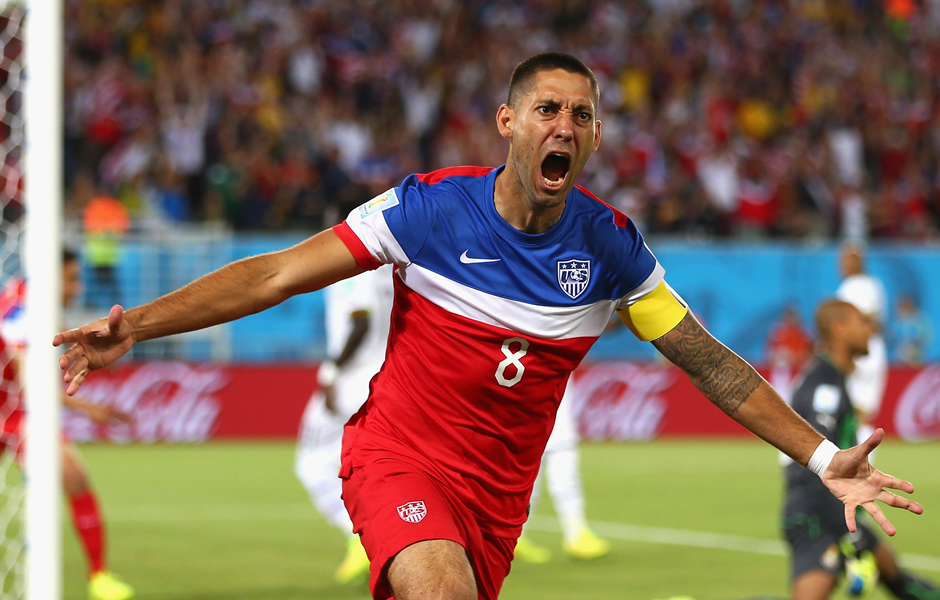 It’s become the rule and not the exception at this World Cup, but the United States vs Ghana game was a thrilling battle. While we saw both a beatdown (Germany vs Portugal) and a bore draw (Iran vs Nigeria) earlier today, the evening match was a truly even match up and the final score was always in play.

Having said that, the United States scored 19 seconds in. What started as a gentle prob into Ghana’s half quickly morphed, thanks to the feet of Clint Dempsey, into a threatening penetration and then a goal. The United States had struck quickly, which was just what they needed.

At that point, they allowed Ghana to take the majority of possession, but they were still quite dangerous on the break. This changed around the 25th minute when American striker Jozy Altidore went down with a hamstring injury and was replaced by Aron Johannson. Altidore had been doing a terrific job of holding up the ball, and without him the American attacks lacked direction.

Altidore was only the first of several American injuries. Centerback Matt Besler was substituted off at half time for John Brooks, after Besler tweaked his hamstring – though not as several as Altidore had – shortly before the first half ended. Another centerback, Geoff Cameron, also seem to have had some issues, but they may have just been cramps. Finally, Alejandro Bedoya, who came off for Graham Zusi late in the game, seemed to struggle with cramping too.

After the Dempsey goal, there was a good hour where the pattern of play was as follows: Ghana possession, Ghana builds up in the Americans’ half, and then Ghana’s final ball is deflected or cleared by an American defender. This provided Kwadwo Asamoah with plenty of opportunities to get time on the ball. Asamoah had a very fine match, and while he didn’t get any assists, he had three key passes and completed the second most passes amongst the Ghana squad. Those stats serve as a testament to how much influence Asamoah had over Ghana’s attack and build-up, even though he played at left back.

Asamoah was just as good in defense, though his right-sided counterparts cannot say the same due to Dempsey’s early goal. While our Asamoah didn’t get an assist, a different Asamoah – Asamoah Gyan – assisted Ghana’s goal, which was scored by Andre Ayew. Gyan, who didn’t score but came close on several occasions, did a terrific job of getting into space and battling USA’s centerbacks, but he failed to finish any of his chances.

While Asamoah was perfectly fine at left back, he may have been more useful for Ghana in the midfield. He may have helped quell the good performances of Jermaine Jones and Kyle Beckerman – Serie A vet and old Asamoah foe Michael Bradley didn’t have the greatest game today – and he did plenty of playmaking as things stood.

The game seemed set to finish 1-1 after Ayew’s equalizer, but moments later the Americans got a corner. Graham Zusi took the corner, and Brooks headed it past Ghanian keeper Adam Kwarasey. The USA had taken the 2-1 lead, and despite the five minutes of added time, the Ghanians could not find another goal.

Asamoah was arguably Ghana’s best player. He was certainly in the running for such an award, but Ghana’s failure to win does not bode well for his future time in Brazil. This match was a must win for both teams, and while Portugal suffered a heavy loss to Germany, it’s unlikely that they will leave Brazil with 0 points. Ghana have an impossible task ahead, and their next game is against Germany. They wrap up against Portugal, but barring a miracle against Germany, they will likely be eliminated after the next game.