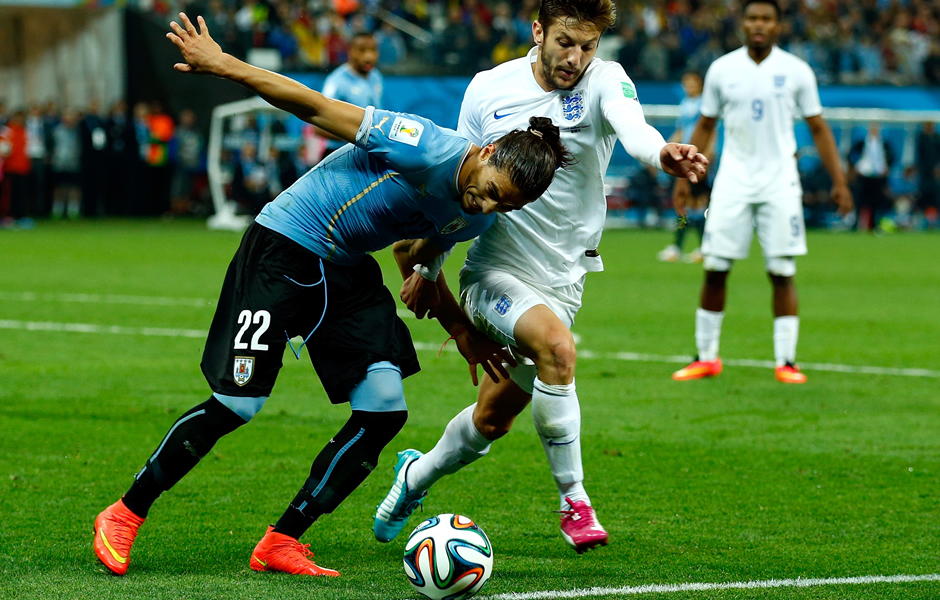 Uruguay and England met today, in a match of two sides who desperately needed a win. They had both lost their first matches, Uruguay to Costa Rica and England to Italy, and the loser of this match would be almost surely – but not mathematically – eliminated. Thus, both sides were pretty desperate.

As would be expected from both sides’ hunger to win, this started off as an end to end match. While neither team was able to get that first goal for much of the first half, that changed around 35 minutes in. Edinson Cavani played a cross to Luis Suarez, who headed in the ball for Uruguay’s first goal.

Before the match the big concern for Uruguay – aside from the loss to Costa Rica – was the fitness of Luis Suarez. Not unlike our Arturo Vidal, Suarez was recovering from surgery to correct a knee injury prior to the World Cup. Suarez started the game, which seemed like a gamble on his fitness. Clearly, Suarez was pretty fit. If he is not fit, then he’s just really good.

Uruguay held the lead for nearly an hour, but Glen Johnson sent a ball in for Wayne Rooney in the 75th minute, and Rooney calmy finished the chance. Rooney, who has struggled in the past at the World Cup and who hadn’t had a great match against Italy, had now possibly salvaged his country’s chances of getting out of their group. Juve man Martin Caceres, who otherwise had a good night in defense, actually lost his mark of Rooney leading up to the goal. This only made the goal sting more, of course.

But then the Sports Gods remembered that Manchester United and Liverpool are rivals, and Fernando Muslera sent a ball forward that bounced off Steven Gerrard, in front of Luis Suarez. Suarez took the ball and charged towards England’s goal, unleashing a powerful effort that Joe Hart could not stop. In the 84th minute, Suarez had re-taken the lead for his nation, and possibly salvaged their World Cup hopes.

As mentioned earlier, Caceres was partially at fault for England’s goal. As a defender, this defines his game. However, if we look closer, he defended well aside from his error. He was not so great going forward at right back, only completing 61% of his passes. That said, he wasn’t horrible. He made a big error, but luckily for him his error didn’t cost his team the game. He will probably be very thankful to Luis Suarez, and to all the random folks on Twitter who tweeted about how hot he is.