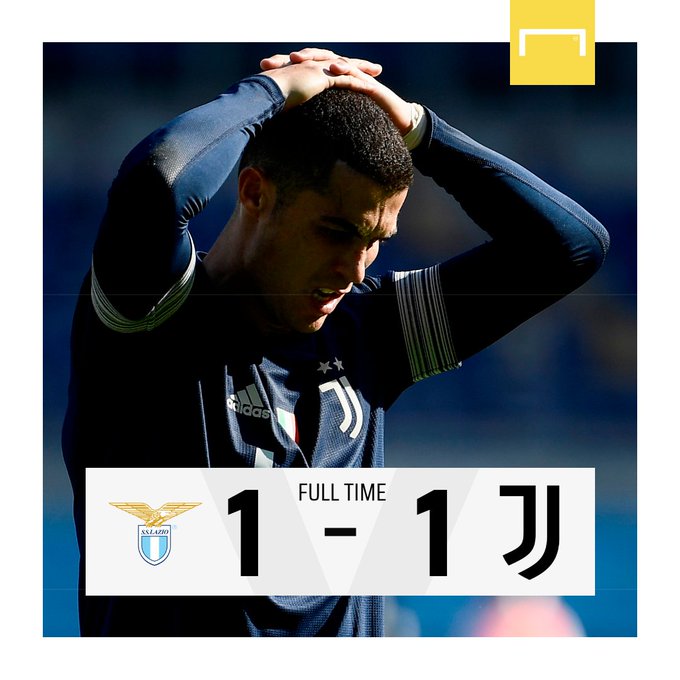 Lazio have punished Juventus in the dying moments of the game by scoring an equaliser deep into injury time.

Both teams started the match with confidence, working the ball around nicely, but the two defences looked well up for the task in hand.

Our side was sitting off Lazio and allowing them to come at us, and that decision allowed us to hit them on the counter, and it was working.

Despite having less of the ball, it was our attack which had the most clear-cut chances in the opening half, and it was no shock to see us go into the lead.

Cristiano Ronaldo was the man to be found in the box after Juan Cuadrado got past his man in the box to get in a devastating cross, which the Portuguese was able to put away.

Just before the break, Ronaldo nearly put us two ahead, as he strikes the ball off the bar after his two teammates’ runs opened up some space for the shot.

Little changed going into the second-half, with the Old Lady continuing to allow I Biancocelesti to come forwards, but our chances were drying up somewhat.

Lazio continued to push for that equalising goal, but were growing frustrated with their inability to challenge Wojciech Szczesny in goal.

Cristiano Ronaldo limped out of the match after 75 minutes, with Paulo Dybala coming on to replace him, and you can be forgiven for seeing this as a pivotal point in the match.

The hosts finally made their breakthrough in the 95th minute when Felipe Caicedo received the ball with his back to goal, only to swivel and get his shot away.

I can’t begin to tell you how frustrating it is to see the result snatched from us in the dying seconds, and with us having to worry about superstar Ronaldo, but with the international break ahead you would hope that he would be able to overcome any issues in time.

Does today’s draw leave Juventus with a mountain to climb to win our tenth consecutive scudetto?