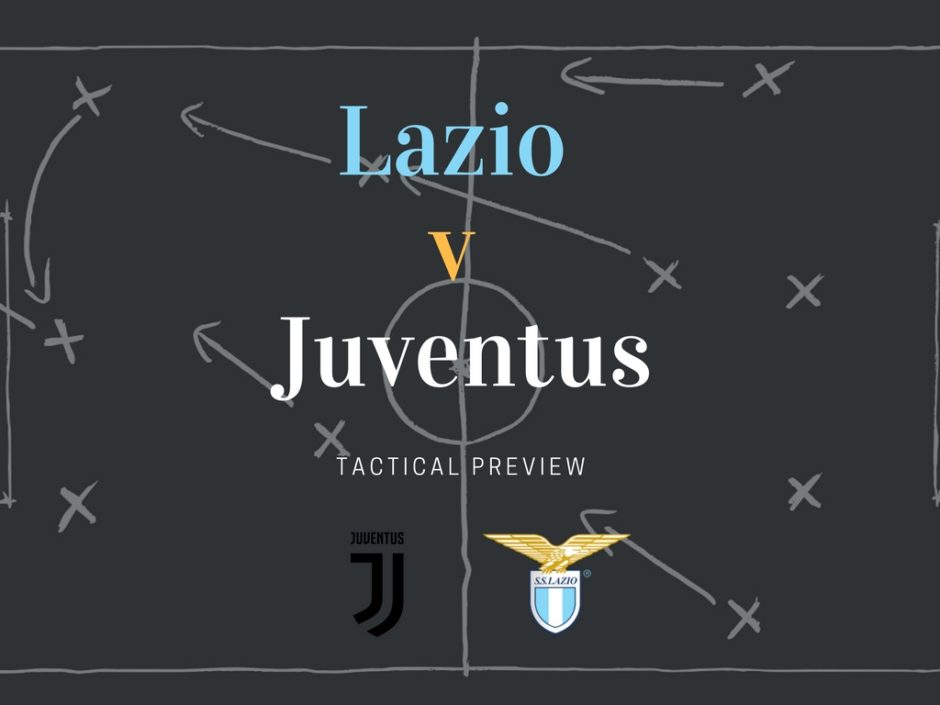 Since Simone Inzaghi’s appointment two years ago, Lazio have enjoyed a pleasant return into the conversation about Italy’s  best and most feared sides, achieving great heights and optimizing the excellent work from their scouting department and by one man: Igli Tare. Often overlooked, the sporting director has had a direct hand in the biancocelesti’s success, signing youth in Milinković-Savić – arguably Lazio’s best buy in recent years – and De Vrij amongst others and the experienced Lucas Leiva, whilst the likes of Immobile and Luis Alberto were gambles that turned out to be great business . Most of the credit, though, goes to Simone Inzaghi, who has not only developed his youngsters but has also built a system suited to his players’ characteristics, allowing them to thrive consistently.

Lazio’s sensational start to the season saw them win nine of their eleven Serie A games, losing only to the almighty Napoli and tying against a Spal. Notably, Lazio also won both their encounters with Juve this season, coming out on top in the Supercoppa final and in Serie A at the Allianz Stadium, ending a 57 home matches unbeaten streak.  The losses to Inzaghi’s side were described by Allegri as “games lost like chumps” because of how Juventus blew comfortable scores.

What has looked rather obvious in recent weeks is, however, Lazio’s drop in physical condition. It was evident especially in their latest Coppa Italia elimination by the hands of Milan where they failed to score despite controlling large parts of the game, lacking sharpness in front of goal and missing the spark from their most talented players. Therefore this could be perhaps the best moment to face Lazio, although Juve are not at their best either – decimated by injuries and seemingly unable to control games by dominating possession.

How Juventus could cope with Lazio’s build-up

Lazio are a team that like to build play from the back in a 3-5-2 that becomes a 3-4-2-1 when Milinković-Savić positions himself on the same line as Luis Alberto. Equipped with centre-backs capable on the ball, they circulate looking to open passing lanes toward Leiva, who positions himself facing the player in possession, thus forming a rhombus and creating a 3-1 shape. For quick progression reasons, unless the space between the opponent’s  first and second line are congested, in which case Leiva can drop beside De Vrij, the Brazilian deep-lying playmaker usually tends to receive behind the opposing striker; immediately after receiving he connects with the wing-backs (who occupy high positions) through a diagonal pass or with the forward line comprised of the two centre-midfielders, Immobile and Luis Alberto. 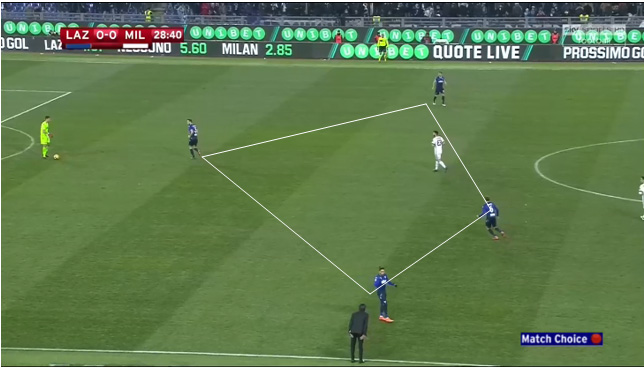 A persistent solution is a long ball to Milinković-Savić, whose aerial prowess and physicality is exploited to progress quickly up the field whilst Lulić and Immobile position themselves close to the Serbian to provide an immediate passing option/win the second ball. This pattern is resorted to so frequently that it may appear that Sergej’s technical qualities are being wasted at times in favour of his physical supremacy.

Leiva lines up beside De Vrij to create a situational back four.

A less common pattern sees the ball-side central midfielder drop – a move that becomes particularly effective when Savić is involved, being able to shield the ball phenomenally with his back to goal – to connect with the full-back and centre-back and penetrate through the lines after having attracted markers deep.

In the Serie A game against Lazio this season, Juventus set up in a 4-5-1 man-oriented high-press out of possession which resulted in forcing Strakosha into playing long balls and caused several errors during Lazio’s circulation. 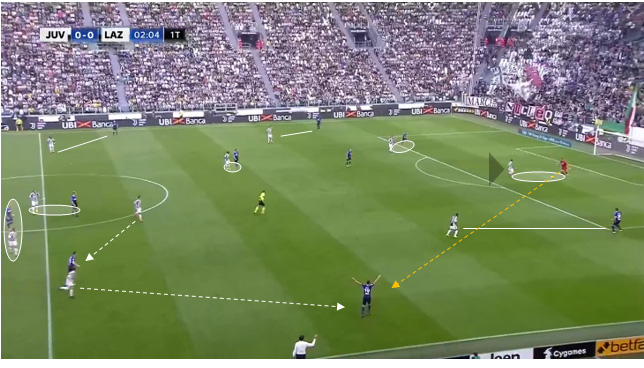 The high-press was one of the few mechanisms from Allegri’s game plan that worked but as time went on Juve’s spacing deteriorated and Lazio found pockets of space between the lines with ease which allowed them to turn a 1-0 into a 1-2 in seven minutes.

Four months later, Juventus have permanently reverted to the 4-3-3 that failed so miserably in the early stages of the season, but the main difference is the restored defensive solidity. Thanks to the addition of Matuidi and his dynamicity the bianconeri have improved their midfield compactness and ability to shift quickly from one side to the other. Therefore, in today’s match, Juve could press in man-oriented fashion whilst pushing forward with the defensive line to ensure vertical compactness, forcing errors in the opponents’ build-up and looking to recover possession in advanced areas.

In the third phase Parolo and Savić move higher up the field, on the forward’s line, leaving Leiva as the only midfielder tasked to find players between the lines. When this occurs, a common pattern arises: the Brazilian plays a vertical pass to the forwards which triggers combinations between the lines and a pass (and run) into depth. 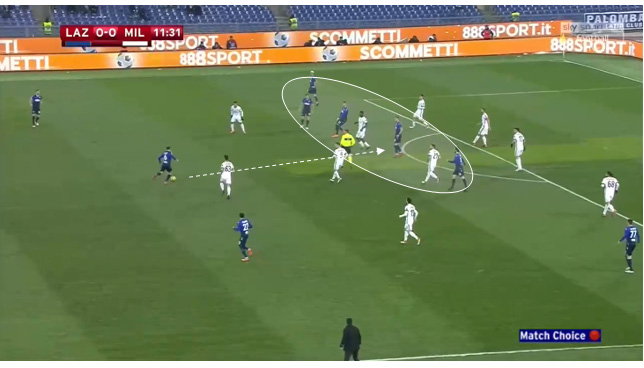 However, committing so many players to attack has its flaws, which can be noticed in Lazio’s defensive transitions. When the opposition recovers possession they can counter-attack in numerical superiority against the back-three and Leiva – who’s unable to defend the entire width of the pitch as he’s (unrealistically) expected to do. To support the Brazilian the centre-backs immediately try to press the passing options, attempting to cut the transition at its roots, which can stop a potential counter if it works but still is rather high-risk if the line of press is bypassed. Against Milan, this situation occurred multiple times and Lazio were only spared by poor decision-making and wastefulness in the final third; at a certain stage of the game, Gattuso even instructed Suso and Çalhanoğlu to stay in advanced positions to immediately break after a pass had been intercepted.

Whilst Juve could press Lazio high, it’s very likely that they’ll alternate between two defensive approaches: high-press in the first 10-15 minutes of each half, seeking for an early goal, to then defend positionally in the usual 4-5-1 mid/low-block focused on maintaining vertical and horizontal compactness. This approach could be entirely counter- based, with Douglas Costa and Alex Sandro acting as the ball carriers to progress up the field quickly and Dybala awaiting to aid and finish.

In the two previous encounters against Juventus this season, Lazio set-up in a 3-5-1-1 mid-block that could become a 4-4-2 if one of the full-backs dropped into the defenders’ line. This strategy allowed Inzaghi’s team to defend the centre of the pitch and immediately transition quickly and, if reports are to be trusted, Felipe Andersons should be starting ahead of Luis Alberto, making this possible counter-attacking strategy even more effective.

Furthermore, Lazio rarely press as a unit preferring to direct the opponent’s build-up towards one side through Immobile and Luis Alberto’s individual pressing. However, given Juve’s struggles to build up play against teams that apply high pressure, Lazio could opt for a more aggressive approach and take advantage of Mandžukić’s likely exclusion – which means that the away side won’t have a valuable target for long-balls when under pressure –  from the starting eleven. 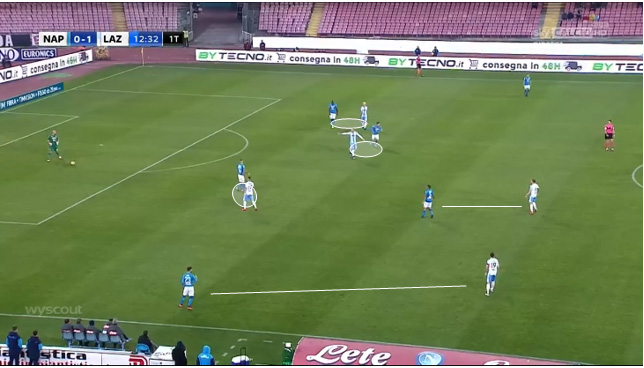 At this point, in what seems to be an endless marathon, Juve cannot afford to lose points since Napoli are cruising and don’t seem to be slowing down anytime soon, making any stumble fatal. The timing of the game seems to suit Juventus but Inzaghi’s team mustn’t be underestimated as they’ll have a point to prove after being knocked-out from the Coppa Italia.

It will certainly be interesting to see how Dybala, who will seemingly play at centre-forward handles a physical and adept marker like De Vrij. Moreover, if the Argentine plays as a false 9, his dropping movements into midfield will be key to attract centre-backs out of position and open gaps for the midfielder’s runs; the use of a false nine worked very well against Torino and a successful  employment against Lazio could add another long-term solution to what already is an extremely flexible side.

Many questions will be answered in Lazio-Juventus, and with Napoli-Roma a few hours later, this could turn out to be a decisive round.