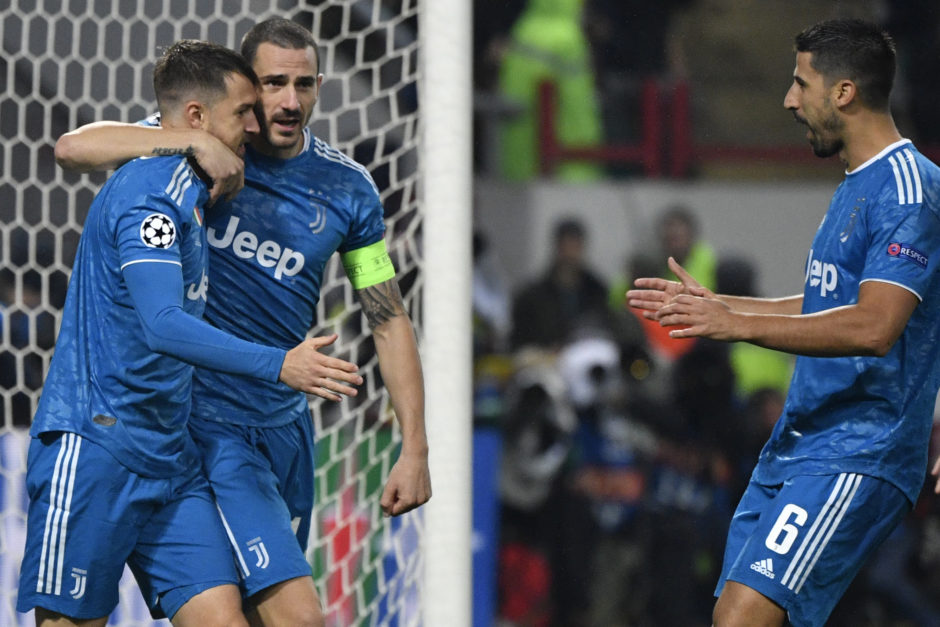 Juventus left it late but a wonderful solo goal from Douglas Costa guarantees them a place in the last 16 of the Champions League.

Szczesny: Perhaps could have done a little better on the opener as he was caught flat-footed from the cross, but he stepped it up in the second-half and performed a great stop, late in the game. 6.0/10

Danilo: His positioning looked off and Lokomotiv had some chances where they got in behind him to begin with. Offered very little by way of attacking threat and his showing was a reminder how much Juan Cuadrado has made that position his own. 5.5/10

Leonardo Bonucci: Expected better from him on the opener and he looked a little shaky thereafter as Lokomotiv got some good crosses into the box. Redeemed himself with a vital goal-line block very late on to keep Juve in the game. 6.5/10

Daniele Rugani: Needed to be so much more physical and looked too easily bullied off the ball on occasions. Made some clearances and headed a few crosses away as the half came to a close. Looked pretty average in the second half as well and doesn’t really warrant a starting spot.  5.5/10

Alex Sandro: Made some good runs but was caught out at the back at times. Despite that, was still the better of the full-backs and really pushed into the Russians half as the game came to a close. 6.0/10

Miralem Pjanic: Good enough delivery on the set-pieces in the opening ’45, but he didn’t look 100% and seemed off the pace – Far from his usual dynamic self and never really looked to impose himself on the match which feels understandable, given the recent injury. 6.0/10

Adrien Rabiot: Generally looked a lot more lively and really supported the attack well by getting into the wide left positions, but he seemed to drift in and out of the match at periods. Needs to really do a lot more to supersede Matuidi in the ranking. 6.0/10

Sami Khedira: One of his better opening halves as he got stuck in before firing in a perfect cross that Higuain should have done better with. Anonymous in the second and was duly subbed off. 6.0/10

Aaron Ramsey: Followed in Cristiano’s effort to claim the opening goal and showed a few nice touches overall in the opening 45 minutes but it’s clear he’s not 100% just yet and needed the run out. 6.5/10

Cristiano Ronaldo: Superb free kick to open the scoring….sort of, and he looked lively for spells but ultimately frustrated and couldn’t get a foothold in the game. Subbed off and perhaps it will work in his favour in the games ahead. 6.0/10

Gonzalo Higuain: A little anonymous as the game started but had two great chances in succession as the half closed out – Some good link-up play thereafter but no clear chances to kill the game off although he ended the night with an assist. 6.5/10

Douglas Costa:  Immediately into the action, imposing himself on the game, pushing into the wide areas and making some tricky runs. Scored a superb solo goal with a clever mazy sprint that left the Lokomotiv defence rooted to the spot- Excellent. 7.0/10

Paulo Dybala:  A brief cameo and some good link up with Pipa and Costa. N/A

Rodrigo Bentancur: Played out the close of the match and did well enough in the midfield without being decisive. 6.0/10