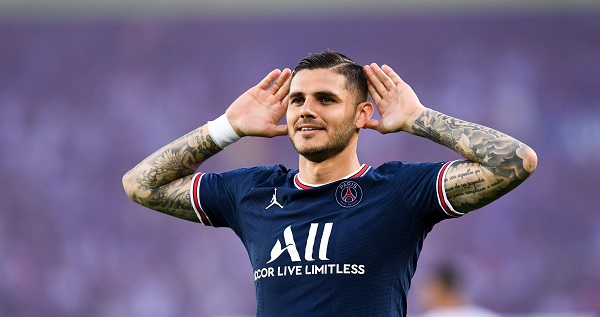 Mauro Icardi looks destined for a return to Serie A as he continues to struggle at PSG.

The Argentinian attacker has not been on his best form in this campaign and has been linked with a move away from Paris.

He has been on the radar of Juventus for a very long time and was linked with a move to the Allianz Stadium as early as last month.

However, because Juve eventually signed Dusan Vlahovic links to him have died down in recent weeks.

Football Italia is now reporting that the former Inter Milan man is destined for another spell in Italy again.

Juventus might need a new striker in the summer if Alvaro Morata returns to Atletico Madrid.

However, the report says Icardi might join AS Roma, who wanted him in the summer, or AC Milan.

Icardi is one of the most accomplished strikers we can sign even though he is struggling in France now.

He plays for a PSG side that is among the most talented in the world and rarely starts matches.

A move to another club where he can play regularly could change all that for the striker.

He would also not be a bad alternative to Vlahovic on the Juve bench.

Danilo will return for the Villarreal match. Here are the positions he can fill