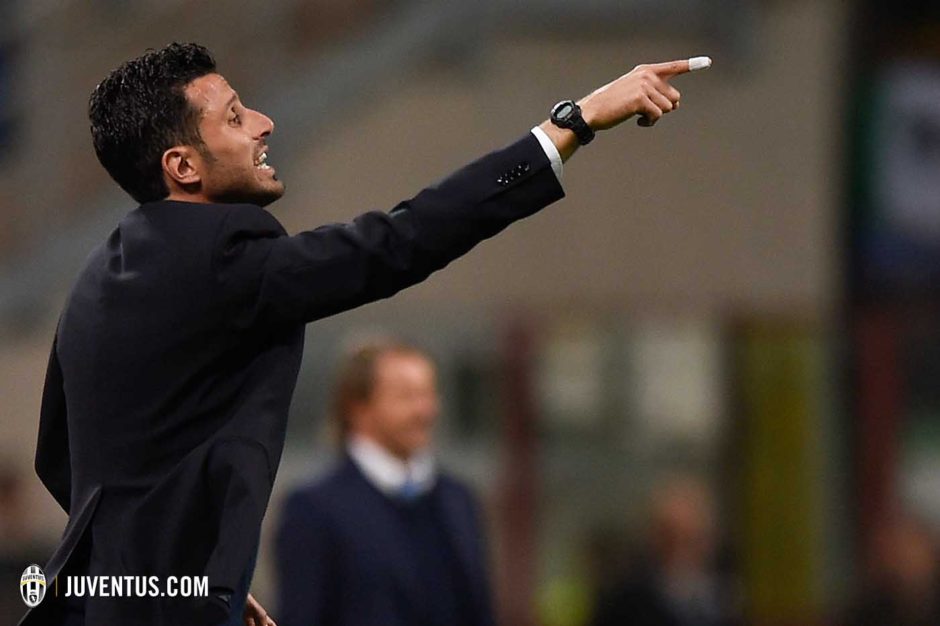 Looking to the future…

Whilst the world apparently shifts on its axis as BREXIT mass hysteria engulfs the many, and my own concerns lie in the – some would say – provocative measure to commemorate the nazi invasion of Russia through NATO practising invading Russia on their borders, I turn to the youth for solace and nourishment. But not the youth of the UK, who roar and rage of WE ARE THE FUTURE, whilst showing zero regard for their counterparts in Greece, Italy, Spain, Portugal and Ireland who have fared less wonderfully under the EU project, no no no, I mean the youth of Juve. Discussion of which can conjure no ill will, nor tear apart friends, lovers, families, even shell from tortoise!

I should begin with a brief mention of Fabio Grosso. A coach who has achieved a UEFA A coaching licence, the highest of such qualifications available and yet I was previously not at all a fan of his ability to lead, to deploy tactics and nourish the development of our little ones. Still, credit where credit is due. The primavera had a brilliant season, finishing first in the league table, losing the finals of both the league championship and coppa italia and of course winning the Viareggio. Fabio was extremely close to a marvellous treble. Which perhaps explains why Serie A newcomers Crotone were eager for his services, as first team coach! It appeared in the balance for a few days, however, the world cup winner decided to remain with Juve to lead the U19s for another campaign.

We have recently procured from Cesena a towering centre forward of very encouraging potential. Elia Petrelli plundered 21 goals and plenty of assists for his U15 side last season and moves to Juve to continue his development. He appears far more lively and technically gifted a player than merely his physique could offer at youth level as the biggest kid in the playground. 188cm tall, with 80kg at his tender age certainly helps, but from what we can see below, his game seems finely tuned in more areas than simply as a battering ram. A worthy addition to our stable of fledgling starlets…

Schiavone was sold outright to Cesena as part of the deal.

In a busy week for recruitment, we have also signed outright the Macedonian 14 year old wing wizard, Nikola Sekulov from Pro Piacenza. Equally vibrant on either flank, the lad is considered a hot prospect by many and will now have the chance to progress through the rites of passage in black and white.

Oumar Toure, who moved on loan to the U19s in January, has been purchased from Santarcangelo. The powerhouse midfielder will continue his career with Grosso next season after impressing in the Viareggio and beyond.

Icelandic international centre-back Hordur Magnusson has left the club to join english championship side, Bristol City for EU3m. Which offers the first recorded instance in history of my beloved Gills (of League One fame) somehow appearing in my thoughts as I write of Juve, as City’s Chris Wagstaff headed to Kent last week!

The player long thought a pretender to Buffon’s crown, Nicola Leali, has moved on loan to Greek champions Olympiakos, where he will be defending the domestic double and sampling the champions league.

Another goalkeeper on our books, the Romanian Branescu has returned to his homeland to roll the dice of destiny at Dinamo Bucharest, on loan.

The worst kept secrets of the youth mercato have become reality, with Colombian midfielder, Andres Tello, joining Brazilian starlet Matheus Pereira on loan at Empoli. The latter we appear to have signed via the Tuscany side and it seems for the best to assume we hold an option on his registration for the future, or own him outright. He comes from Corinthians, now 18, and has represented Brazil at U17 level 8 times.

23 year old wide-man, Leonardo Spinazzola has joined Atalanta on a two year loan deal. The former winner of the Viareggio player of the tournament trophy spent last season earning his stripes at Serie B outfit Perugia, where he was a mainstay of the side which achieved a solid mid table finish, deployed in every position available on either flank throughout the campaign.

Rumours abound of our Argie youngster, Guido Vadala (19) – who some will recall was signed on loan from Boca Juniors as part of the Tevez deal – moving to Brescia, alongside Alberto Cerri (though SPAL are also keen on the Italian prima punta). I cannot believe we are allowed to loan a loaned player so will research with more zeal and for now close to assume that we have purchased the player outright. Yet in Italy, anything is possible…Regardless of the intricacies of the registration issue, after a slow start, Vadala came good in the latter parts of the season and I retain hope of his glorious potential finding the right environment to blossom.

Lichtenstein international midfielder Marcel Buchel (25) has completed his move to Empoli for EU1m. And in other snippets…

Fillipo Romagna is flying the Juve and Italy flag in the U19 European championships..

There are a multitude of deals still to be finalised, homes to be found at senior level for many of our primavera stock from last term and yet rather than pounce on every whisper in the shadows, I will end this update after a brief mention of 19 year old Fillipo Romagna, centre-back and captain of both the Juve Primavera and Italian U19s and also 18 year old right winger Francesco Cassata. Both players were selected for the European U19 championships staged in Germany which began earlier this week. Our group comprises of Germany, Austria and Portugal. How strange, yet fitting, that the team that ended the commendable efforts of the senior nazionale, were beaten in the first game of the group stage to bring the two countries back to a sense of equilibrium. Romagna played the full 90 with Cassata appearing for the final 20 minutes of a 1-0 victory.

Whilst comrade Vlad continues to defy judeo-christian power bloc efforts to completely destroy if not subjugate to their global hegemony routine Syria, and our very own NATO sponsored boys in black ISIS are pushed back, change clothes and squeal ‘But I am a moderate terrorist!’, Juve plough ever onwards with their own plans for global hegemony…and I am pleased to announce that the club have signed their first Syrian player in history. Ramadan Ammar moves from Italian side POL Cimiani and joins us on a 2 year deal. Son of former Syrian star Munaf Ammar, 14 year old Ramadan is a striker who has plundered goals in various tournaments, impressed enough at Cimiani and will join the U15s for the upcoming season.

I will be following young Ammar with interest…

For now, as the unforgiving wind and 3C icy chill encourage me to head indoors to seek slumber, I shall sign off, wishing all juventini well in everything which matters most.

Video – On this day, Juventus edged Manchester City thanks to Mandzukic and Mortata

Pjanic: “I understand why it was always difficult to finish ahead of Juve”