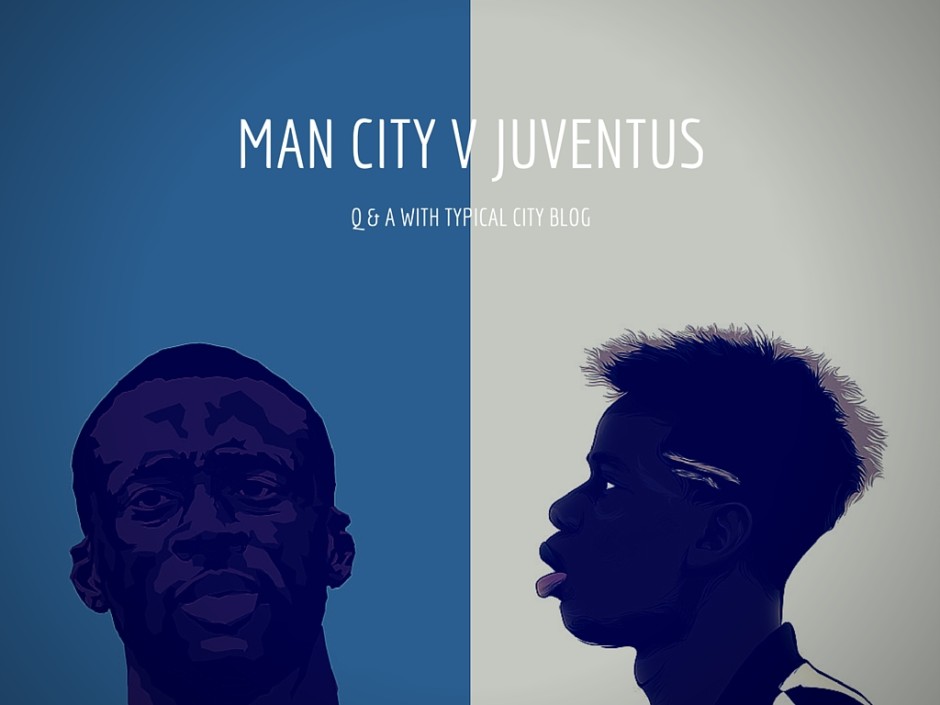 Juventus start their Champions League campaign against a rampant Manchester City who sit top of the Premier League and look in scintillating form.

Ahead of the game, we out your questions to Alex from the ‘Typical City‘ blog to get an idea of what to expect.

1. City have been a real domestic force for the last few years, but not so much in Europe. Is this season going to better for City?

Absolutely. This is the most complete team City have ever had. Going forward City have been deadly and in defence we have looked surprisingly solid. Not conceding a goal this season so far tells its own story. I have high hopes this season and I don’t think I’m being over optimistic to suggest that City should be topping this group. If we run into Barcelona AGAIN after that then all bets are off…

2. Who do you consider the biggest threat in groups, CL runners up Juve or double EL winners Sevilla?

Juventus are a slightly bigger threat to my mind. Your experience of recent success and general savviness should see you in second. That’s not to discount Sevilla though as they clearly know what they’re doing in Europe. But Juventus are a first class team whereas Sevilla and Gladbach are not.

3. Dzeko and Jovetic have left City for Serie A, is this for better or worse for City?

Honestly, it’s a combination of both. Jovetic wasn’t any good for us on the rare occasions he was fit. Dzeko has written his place in City history and is a much more significant loss. The Bosnian is a big game player and has shown us time and again what he’s capable of. There will be at least one stretch this season when we look back and think “wouldn’t it be nice if Dzeko was still here…”

4. Juve and City havent played each other much yet, last time it was in EL groups and ended in 2 draws. What do you expect of our next 2 encounters?

I am really looking forward to playing Juventus. Seeing them walk out at the Etihad for a Champion’s League match will be a special moment indeed. Between our two current teams I really cannot see two draws being the outcome again. I expect City will win at home and possibly at your ground. I don’t see Juventus winning both taking your current form into account compared to ours.

Pellegrini is the perfect fit for City in this period of time and I wouldn’t swap him for anyone at the moment. He seems to be very in synch with the club, the players and (most of the time) the fans. In saying that I of course mean no disrespect to Allegri. The man’s achievements speak for themselves and I’m not under the illusion that he will be giving City an easy ride!

6. Best XI made with players from both teams?

I’m going to the City 4-3-3 formation, players who are fit, based on this seasons form. You and your readers will disagree with the goalkeeper at least but here we go…

I’m not even sure if that team would make sense on the pitch but it would at the very least be a lot of fun.

7. In your opinion, whats Juve’s biggest strength and weakness ?

Previous to the start of this season I would have said your defence is the biggest strength. On their day they are very, very good. That’s not even mentioning Buffon who is apparently evergreen.

The easy answer here is Paul Pogba. Last season there would have been an argument for Arturo Vidal and I suspect in the near future there will be an argument for one of Dybala or Morata but for now the runaway candidate is Pogba.

9. Of all the CL groups City have been in, which did you see as the toughest ?

That’s a really difficult question because in one way or another, including this season, we have been shafted. The year we were drawn with Real Madrid, Borussia Dortmund and Ajax was a particularly bad year. Last year’s group including Bayern and Roma was also dreadful. One year we will get an easier group…

Oddly enough the worst thing over the last few years has been getting drawn against the same teams over and over. There’s something to be said for variety which is one of the reasons I am very excited about the group this year.

10. Against an organized defence like Juve’s, how do you think City will break them down ? A moment of genius from Aguero ?

Normally I’d have presumed it might come down to Aguero doing something outrageous but to be honest we have so many options this year that we aren’t so heavily reliant on him. David Silva is our best player and has been sensational as per usual this season. Sterling has started brightly and it is clear that defenders don’t know what to do with him. De Bruyne promises more of the same. That’s just the most obvious weapons and doesn’t even consider the possibility that Toure might decide to win the game on his own.

The thing I think you will get a front row view of tomorrow is that our front players interchange constantly. Even a defence as formidable as Juventus’s will have their work cut out.

11. Do you see City as favourites for the PL this season ?

Yes. Despite large sections of our media thinking City would finish 4th or even 5th for some reason it has been clear for a while that City have a deeper, stronger squad than everyone else. Add in the summer reinforcements, the return to form of Kompany and Managala finally turning into the defender we hoped he would be and the perfect start to the season looks like more than a flash in the pan.

12. What are the key differences between this seasons City and last seasons ?

As mentioned above, Kompany is no longer playing like a Sunday League player and Mangala has settled into the team and the league. Our attacking options are the best in the Premier League by a distance and one of the best units in Europe already. When Sterling and De Bruyne are fully up to speed it is heard to see anyone stopping us from scoring.

Most crucially, Pellegrini has seemingly switched to a 4-3-3 formation which plays to the team’s strengths rather than persisting with his preferred 4-4-2 in the name of stylistic purity.

13. After so much spending, what do the fans expect from the team in the CL this season? Finalists? Champions?

I think anyone who “expects” their team to win the Champion’s League is an idiot. It’s too unpredictable and relies on too many variables. However this is the first City team I’ve looked at and can’t see any reason why they shouldn’t be in the later rounds. Quarter Finals at least. Previously there has always been an obvious weakness but not this time really.

14. Do MCFC feel that their team is complete? Or are there any areas which they feel they’re still vulnerable in?

The only area there’s a potential worry at is at left back. Both Kolarov and Clichy retain the potential to have an absolute shocker completely at random. This could happen against Barcelona or in an FA Cup game against Bury. Both of them just sometimes play really really badly.

15. Whats the most effective way to keep Aguero quiet ?

I promise I’m not just saying this, but there isn’t a tried and tested way to keep him quiet really. Sometimes he’s injured. That’s the only sure way to know he won;t have an effect on the game. He is the real deal. He is that good. Ask Bayern Munich or Barcelona for examples of that…

16. how do you utilize Bony? As a super sub or do you use him and Aguero together sometimes?

Bony is definitely not purely a super sub. He has not really got fully into the groove at City yet but there is enough evidence that when he does he will score his fair share of goals.

He’s not a direct replacement for Aguero. He is superb at drawing defenders out of position and bullying them. He is also very good at playing it into players running beyond him which is obviously a good thing bearing in mind the sort of players we have just behind the strikers. He is also useful in a 4-4-2 but that is now hopefully consigned to the bin or at least only used as a last resort.

3-1 to City. I don;t expect to get through this game without conceding at least one goal but I also don’t expect your defence to be able to handle City for 90 minutes…