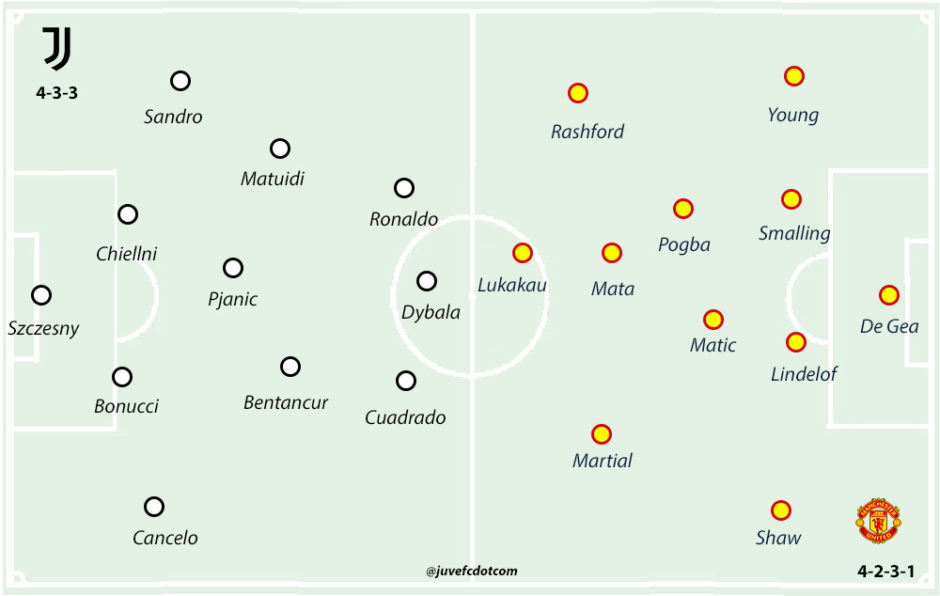 Paulo Dybala scored the only goal on the night as Juventus dominated Manchester United for a 1-0 victory n the Champions League.

Wojciech Szczęsny: Made two very routine saves but he was a spectator for large portions of the game as Juve dominated for extended periods. 6.0/10

Leonardo Bonucci: Made an exceptional tackle on Martial in the box that was timed to perfection. Three important clearances and excellent distribution from the back – Arguably one of his best performances at Juve since his return. 7.0/10

Giorgio Chiellini: Marked Lukaku at the game and had his measure for the entire night. His positioning throughout and his awareness of the United attack was exceptional. A captain’s performance. 7.0/10

Joao Cancelo: Tore down the flank for much of the first half and tested De Gea with a decent effort from outside the box. Started to tire as the game continued and his performance did drop off, but that was only to be expected. 6.5/10

Alex Sandro: 90% passes completed, three clearances, two tackles and some fine work in marking Young and Rashford. Excellent at the back and in control throughout the whole match. 7.5/10

Rodrigo Bentancur: A good display despite some wayward passes that could have been dangerous. The youngster continues to grow as he plays in the biggest matches. 6.5/10

Miralem Pjanic: Excellent distribution and awareness throughout – Good delivery on his set-pieces and the heartbeat of the Juve side. 6.5/10

Blaise Matuidi: Had a great effort saved by De Gea but his work-rate throughout the night was phenomenal. He really is one of the most underrated players in the team of late and his performances since returning from the World Cup have been consistent and understated. 7.0/10

Juan Cuadrado: Derided for his inclusion in the team, but his presence in the box helped set up the first goal and his liknk-up with Dybala was on-point throughout. 6.5/10

Cristiano Ronaldo: Had a great free-kick saved by De Gea and while he had a quiet night by his high standards, he did manage the test the United keeper on a few occasions. 6.5/10

Paulo Dybala: Excellent movement all night as he seems to relish playing higher up the pitch. Showed that perfectly when he was in the right place at the right time to score the only goal of the night. 7.5/10

Andrea Barzagli: Steadied the back line and offered some extra muscle in defence. N/A

Douglas Costa: Restricted to a brief showing at the end of the match. N/A

Federico Bernardeschi: A brief cameo late in the game to keep things ticking over. 6.0/10