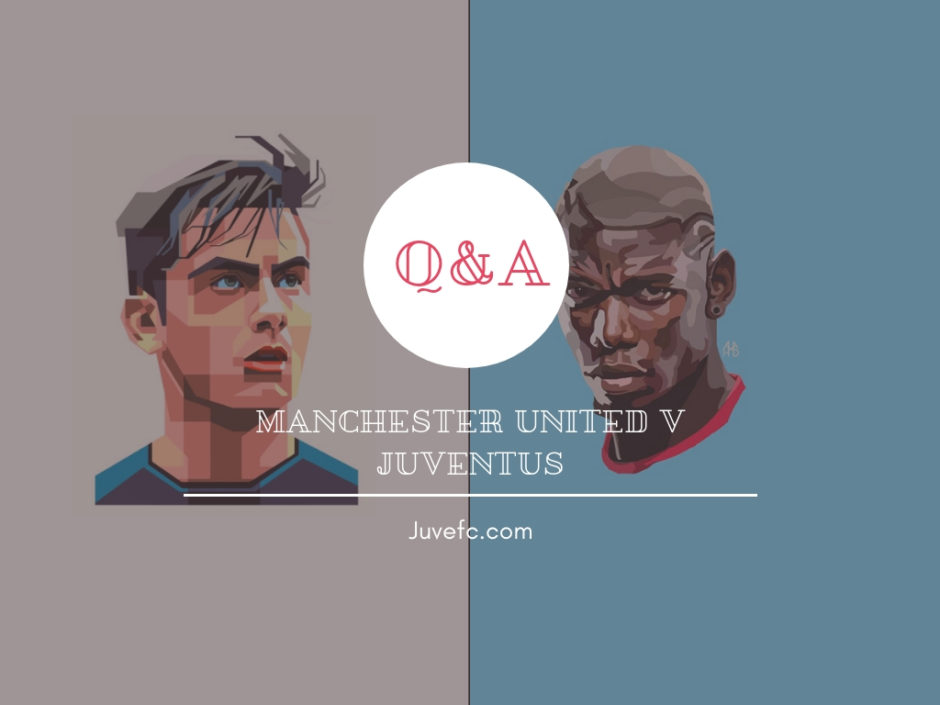 Juventus head to England to face Manchester United in the Champions League for the first time since 2003 and ahead of the match, I put your questions to best selling author, Wayne Barton.

Wayne has written a series of books on United ranging from player biographies to reviews of record-breaking seasons and just about everything in-between. I highly recommend you check out his work and follow him on Twitter. 1. Part of the legacy built by Alex Ferguson which was modeled on Lippi’s Juve in the 90’s – Do you think it’s time to take a leaf out of Allegri’s book in some way?

No, but I’ll elaborate. That’s not a slight on Allegri. Ferguson had a very young team who were naive in continental football. Their education came against Juventus in 1996 and 1997. When we defeated you in 97/98 in that great game at Old Trafford it was a watershed moment — at that time, United were reaching a peak. But then they had Roy Keane who was out injured and then Schmeichel, Giggs, Pallister, all of these at various times and more were all out with injuries. I wonder how we might have done in Europe with them all fit. Perhaps we would have won the European Cup a year earlier. Real Madrid defeated you in a tight game, just as we had done.

I digress, suffice it to say that playing against Juventus was very much the benchmark. The confidence gained from beating them was enough to make United believe they were good enough to go toe to toe with anyone.

This United aren’t as good or at the same stage of their development. We have a collection of players who are coming toward the end of their career and a number who just aren’t good enough. They need to establish their own identity.

2. There seemed to be  huge expectation during the summer for new signings – Why wasn’t United’s squad strengthened over the summer?

Having given Mourinho a new contract in January or February, the club didn’t back him in the summer. What went on behind closed doors is anyone’s guess but early on in the summer we were linked with moves for Willian, Toby Alderweireld and your own Alex Sandro, in addition to the players we did bring in. Luke Shaw has started the season brilliantly but the other two names are certainly players in areas where we need strengthening.

Ed Woodward briefed the press that there was concern over the names Mourinho wanted to bring in, and that there was also concern that the two centre halves he has already signed — Eric Bailly and Victor Lindelof — aren’t good enough. Maybe those are both valid points, maybe you could go further and question most of Mourinho’s signings.

If they didn’t trust the manager to strengthen the squad with the players he wanted they shouldn’t have given him a new deal, and either way, they shouldn’t have briefed the press in the way they did, in my opinion. Anyone can see that we need more quality in order to challenge. 3. Clearly something’s missing from the current United on-field establishment. On paper it is without a doubt one of the best teams in the World, from the least used player to the staff. My theory is that this is due to the lack of on-field leadership (a’la Keane). What do u think?

A lack of leaders, yes, a lack of collective dedication. It’s a bunch of individuals and not a team. There are strong characters in there that you think might make leaders or captains, but for one reason or another — never a settled eleven, conflicts with the manager, simply wanting to leave — it rarely translates into the sort of performance you would hope.

Maybe there’s a huge issue in the level of competitiveness, which might sound a weird thing. I wonder if this United team don’t believe in themselves enough to mount a challenge against City, and if that translates into the sort of lethargic performances we’re used to seeing. One of Ferguson’s best achievements was overcoming the Chelsea side of 2006 and he did that by drumming in the value of consistency and concentration. These are two qualities we lack.

4. The question quite a few people asked: Do you think the issues United are having at the moment are just manager related, or do you think it’s an issue further up (eg Woodward and other execs or the Glazers)?

It runs deep! It’s been said that the Glazers have backed the managers with more than £600m being spent since Ferguson retired. Clearly that hasn’t been enough to compete, which is a reflection of both the obscene mis-spending and mismanagement and also how obscene the current game has become. It’s splitting hairs, because it shouldn’t be about money, but you can still make the argument that United might be better off putting the money towards new players than the huge payments taken out yearly or payments gone towards servicing debt.

However, the more contemporary issue is that even though they attend games now and then, they aren’t football people. They are business people who are only interested in their asset making money. They are very fortunate people as they have one of the few football clubs that make a lot of money. They have one of the very few clubs whose popularity and presence in the press is not affected by their success. Champions League qualification is sufficient.

In Ed Woodward, they have a man who is clearly more adept at managing the financial side of things than the football side. The Glazer family would see that as a compliment. But the problem is Woodward knows the power he has and is much more active than he needs to be, particularly when talking to the press. He has added to the instability at the club by undermining the manager and no person in his position at a football club should be allowed to do that. That he has been allowed, and even more than that, will likely be the man responsible for appointing the next manager, speaks volumes.

It makes an already difficult job much more difficult for Jose Mourinho. It is fair to say that his time at United has been mixed. He has won trophies and taken United higher than they have been in the post-Fergie era. You could reason that with the players he’s been denied or the with the money taken out of the club, United would be putting up a stronger challenge. He would certainly argue that and he’d have some justification, especially when this is the acute area on whether his time at Old Trafford will be deemed a success or a failure. But Mourinho must shoulder some blame. There are certain things you don’t pin on a manager in early periods of transition — not knowing his best team, and perhaps more crucially, not knowing his best defence — but two years in, it’s not an excuse. From one game to the next nobody knows the best team or Mourinho’s favoured. When it has seemed inevitable that he was going to be sacked, or at least the rumour mill has been at its most intense, his selections have bordered on the bizarre. He switched to unusual shapes and played Herrera and McTominay in defence to make a point about the ball-playing defender he wanted to buy in the summer. Those selections have cost us games.

He has been too cautious playing at Old Trafford. It is an over-estimation of the team’s ability to defend. There are some arenas in the world with unique atmospheres and Old Trafford is certainly one, sometimes you think United don’t start playing until the opponents score, and that’s just something that seems embedded within the club. It conflicts with Mourinho’s game plan and this is another thing he hasn’t got a grip on two years in.

I thought that his way of dealing with the press would be much better than David Moyes did, for example. In some ways it has but in some ways it’s just as damaging. After our Champions League exit to Sevilla he reeled off the times he had won at Old Trafford as a visiting manager to undermine the club’s present status.

I’m also not a fan of the way he publicly throws players under the bus. I can’t remember him being like that in his first spell at Chelsea. Some might say that this current United squad deserve that sort of treatment and honestly I have no particular affection for many of this squad but there comes a point where it becomes too much.

The problems are more comprehensive and complex but the above summary gives you an insight into just how many parties are not doing what is expected.