Claudio Marchisio has bid farewell to Juventus, making his last appearances at the clubs training ground this morning and penning an emotional farewell to the fans.

The Bianconeri midfielder ended his 25-year career with the club last week and released an emotional letter to the supporters, thanking them for their support over the years:

“I spent the last 25 years of my life imagining what I wanted to become and the dreams I wanted to achieve with Juventus, but there wasn’t a single moment when I thought I would live a moment like this.

“Regardless of what my next steps will be, professional or otherwise, it would be useless and wrong of me to hide that my heart and DNA bear and will always bear only two colours.

“I wore the Juventus shirt for the first time at the age of seven, and from that moment I didn’t take it off, not even for a moment.

“I grew up with its philosophy and I first tried to absorb it and then be its ambassador, both on the field and in everyday life.

“It’s said that at Juventus, ‘winning isn’t important, it’s the only thing that counts’. Behind this phrase, which is so loved by us fans (yes because even if it may seem impossible, I am one today), said by our President Giampiero Boniperti, lies the deepest meaning of our way of life.

“Winning isn’t important, it’s the only thing that matters. When you’re a child with a dream, a child among many, you know that for [the Juve] shirt, you’ll have to be the best. Always.

“Winning isn’t important, it’s the only thing that matters. When you grow up, when your dream is almost real, you don’t let it get to your head.

“You work hard in the shadows of your idols forever and give the best of yourself every day for the shirt because those stripes, once sewn on me, equate to pride, joy and responsibility.

“Winning isn’t important, it’s the only thing that matters. When those idols finally become your teammates, you have to be stronger than the legs that tremble at the idea of ​​entering the field in single file among them.

“Del Piero, Nedved, Buffon, Trezeguet, Camoranesi and all the others. Because everyone knows that, to honour this shirt, you must do your bit.

“This doesn’t just apply to us players but also for every single fan. Juventus win because they’re the best on and off the field.

“Winning isn’t important, it’s the only thing that matters. When you stick to your agreement of doing everything possible to never disappoint those fans, who are the most loyal, sincerest and best in the world.

“When you realise that what has been your life for 25 years will all of a sudden be part of what it was, there is only one way to keep winning and it’s to know that in any case, I won’t lose any of this because it’ll always be part of me and I’ll always be part of it, wherever I will be. With love forever, Claudio.” 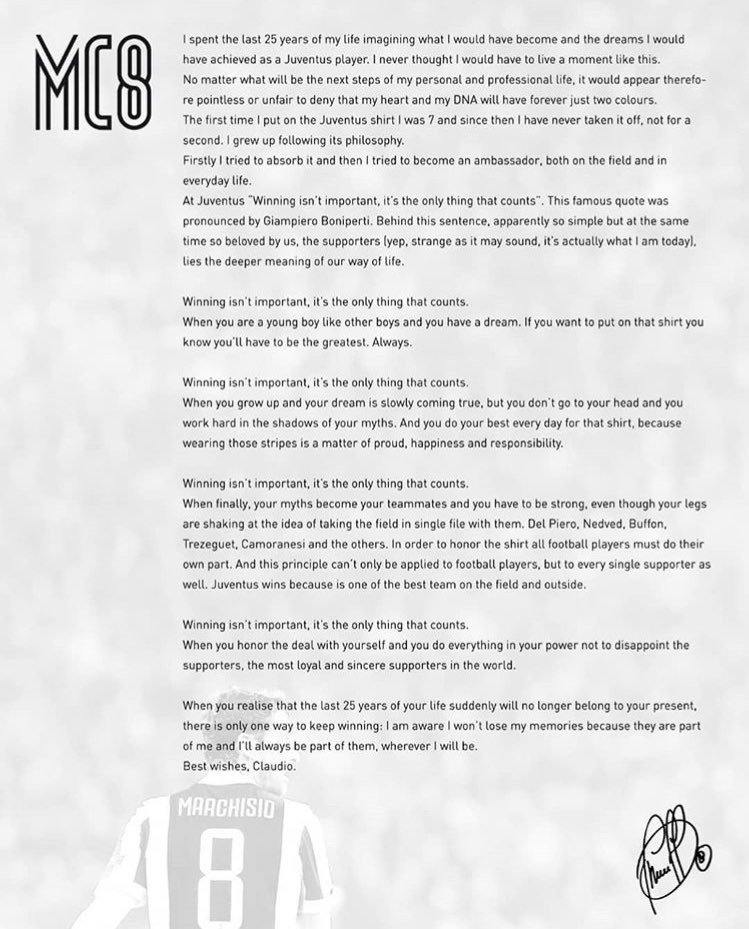