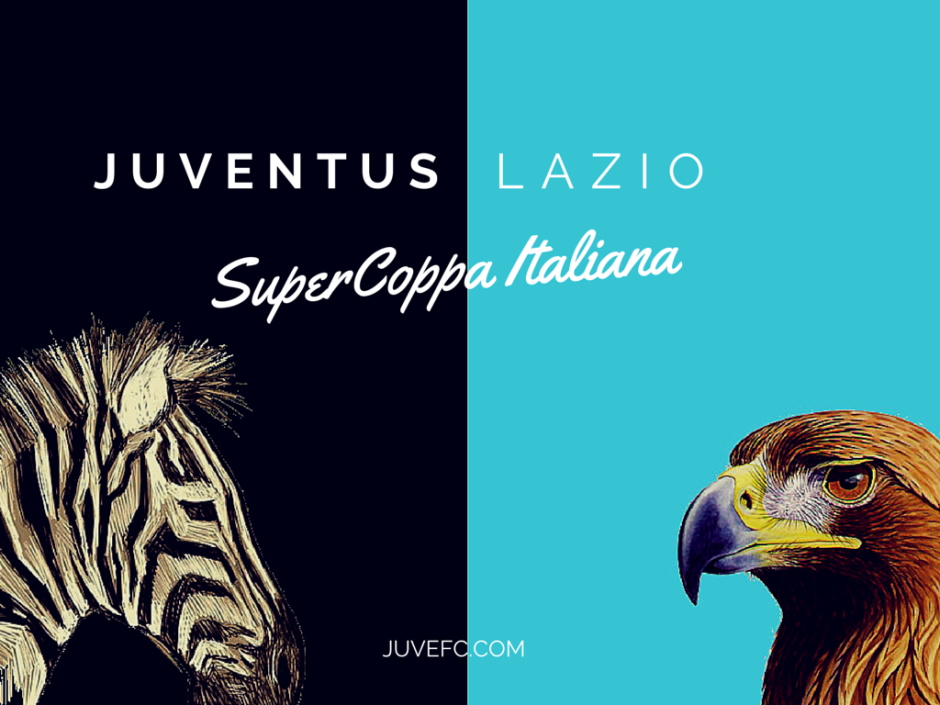 Juventus officially opens the 2015/2016 squaring off against Lazio in Shanghai with the Supercoppa on the line. It’s a rematch from the Coppa Italia final, where Allegri’s side triumphed thanks to an extra-time goal by Alessandro Matri. Juventus have owned Lazio last season with three victories in three matches, but it’s clear that the roster is much different now after the departures of Carlos Tevez, Arturo Vidal and Andrea Pirlo and the subsequent arrivals of Paulo Dybala, Mario Mandzukic, Sami Khedira and Simone Zaza (and a couple more in the making).

Obviously, Juventus will struggle a little bit at the beginning of the season: Tevez, Vidal and Pirlo were not only formidable players, but also the main reference points on the pitch. Juventus will have to look for new leaders, but ultimately things will be fine if the newcomers emerge as expected, because the talent is there. The Supercoppa is a first important test to understand where the squad is at in this transition from the old regime to the new one.

The recent injuries leave Allegri with little choice: Juventus will be without Giorgio Chiellini, Sami Khedira and Alvaro Morata, while Andrea Barzagli have quickly recovered from a thigh strain and his availability is going to be a game-time decision. It is probably wise not to rush his comeback as Juventus have the men to make up for his absence and Supercoppa is not that important in the big scheme of things. Surely, it’s always nice to lift a trophy, but nobody will remember it in two months.

Paulo Dybala suddenly becomes a lock to start upfront, alongside Mario Mandzukic, and Daniele Rugani has a solid chance to be in the XI too. On paper, Dybala-Mandzukic is a couple that should work wonders as it combines the unpredictability, the pace and the playmaking ability of the former Palermo ace with the strong presence in the box and the work rate of the Croatian centre-forward.

As always, Allegri can go in two directions: 4-3-1-2 or 3-5-2. In the first one, Roberto Pereyra would play in the hole, Stefano Sturaro in the midfield. The downside is that there would be only one more midfielder available on the bench, Simone Padoin. With the second option, the doubt would be between Pereyra and Sturaro in the midfield and Allegri would be left with no other CB than a hobbled Barzagli.

It’s worth nothing that Pereyra has only a game in his legs after the delayed return because of the Copa America, so he might not be at the same condition level of the others, and Caceres hasn’t fully taken part to the training sessions from the get-go because of last season’s injury. The battle between Barzagli, Caceres and Rugani is fascinating as it will show what the coach thinks of the young defender and if he trusts him already.

Lazio have had a difficult pre-season as they have lost Vicenza, Anderlecht, Sigma Olomuc and Mainz, but in the end, friendlies mean little. They have let go two veterans: Stefano Mauri, who was a big contributor last season with nine Serie A goals, and Cristian Ledesma, a locker room leader even though he was not a regular anymore. However, and more importantly, they have retained the whole young(ish) core: Stefan De Vrij, Lucas Biglia, Balde Keita, Antonio Candreva and Felipe Anderson. Often continuity is better than nailing a bunch of expensive signings and I’m curious to see what kind of season they’ll have.

In a smaller proportion, they are replicating Juventus’ strategy by parting ways with important but older players and replacing them with prospects like Riccardo Kishna, Ravel Morrison, Sergej Milinkovic-Savic, Wesley Hoedt and Patric. Interesting purchases that maybe don’t warm the hearts of their fans, who were demanding big acquisitions to try to retain last year’s surprising third place, but the plan should pay off on the long run.

Even though 4-2-3-1 with a dreamy Candreva-Anderson-Keita line behind the striker will probably be Stefano Pioli’s favorite lineup throughout the season, he should opt for a more defensive solution in this one. Last year, when facing Juventus, the coach has chosen 4-3-3 twice and 3-4-3 in Coppa Italia, where they fared surprisingly well.

Pioli would probably prefer 3-4-3 if he had the whole roster at his disposal, however he’s facing some lineup issues on his own. The two key pieces Marco Parolo and Senad Lulic are suspended and the two defensive cornerstones De Vrij and Stefan Radu have barely played this summer because of injuries, even if both should be available. The absence of Lulic is particularly heavy as he’s the only one who can efficiently play as LWB, considering that Radu is barely a left-back.

Despite the paucity of midfielders, Pioli’s pick should be 4-3-3 with the standout youngster Danilo Cataldi and the unlikely hero of the Napoli game Ogenyi Onazi flaking the newly appointed captain Lucas Biglia. The only alternative would be Ravel Morrison, but he’s been slowed down by an ankle injury and he isn’t very familiar with the box-to-box role. Santiago Gentiletti and De Vrij should be the centre-back pair. Filip Djordjevic has been dealing with a bruised foot recently so the everlasting Miroslav Klose is the frontrunner to start.

Lazio was the second best attack in Serie A last season, with 71 goals, trailing only to Juventus (72). Their combination of speed, dribbling skills on the wings and cuts by midfielders is hard to contain. It surely helps Juve that Parolo and Lulic, who add another dimension to their tactics, are out, but Lazio has made great strides and it is a legit top-tier team. 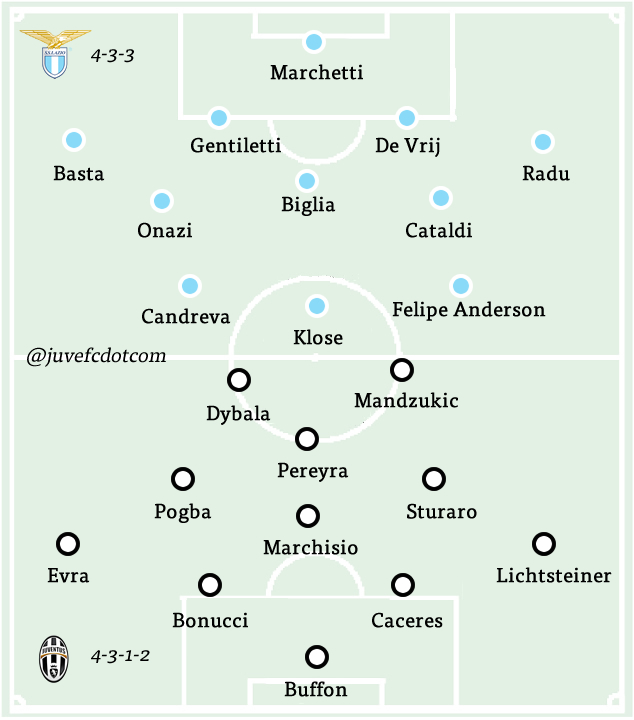