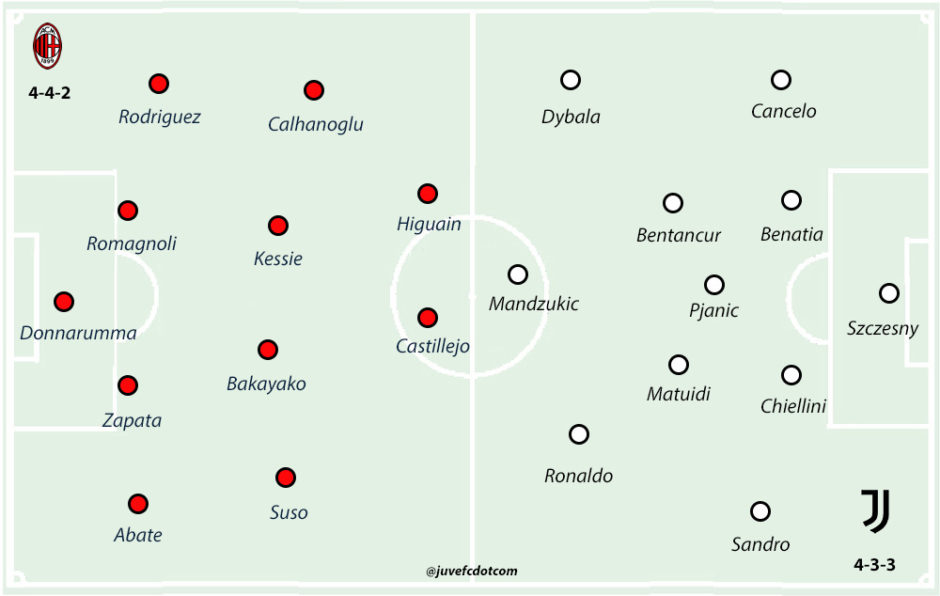 Juventus were in good form as they overcame Milan at the San Siro with goals from Cristiano Ronaldo and Mario Mandzukic.

Wojciech Szczęsny: It’s a testament to his character that he was able to transmit so much confidence after the disappointing loss to United earlier in the week. Controlled the box well and his save on Higuain’s penalty was Gigi-esque, using some first-class mind games to get the better of his former teammate. Superb. 8.0/10

Giorgio Chiellini: Surprisingly anonymous at the back and a little wasteful when he did have the ball. Marked his man well but it wasn’t his usual towering performance . 6.0/10

Medhi Benatia: Really disappointing to see him pick up a needless yellow card and the mistake on the penalty could have been avoided. Other than that, he was imperious at the back making five interceptions and five clearances. Clearly looks a little rusty for not having played frequently, but he is still a reliable deputy. 6.5/10

Joao Cancelo: A quiet start and some wayward moments aside, he relieved so much of the pressure in the wide areas and played some really smart crosses in the final third. Perhaps the highest praise I can offer is that Juve looked a much better side when he’s on the pitch. 7.5/10

Alex Sandro: Gradually reverting to the exceptional left-back that he was a few seasons back. Provided an inch-perfect cross for Mandzukic to open the scoring and played such a tight defensive game on Suso that I forget the Spaniard was on the pitch. 8.0/10

Rodrigo Bentancur: Such a promising talent – He is clearly coming on leaps and bounds for having more playing time and his development is starting to accelerate. He looks ever more confident on the ball, less nervy and far keener to get into the box to create chances. His awareness is getting better and his passing range is starting to gain some depth. Immense. 7.5/10

Miralem Pjanic: A quietly confident game where he worked hard to keep Milan’s midfield quiet while distributing the ball tidily, without flair. Played a great couple of through-balls early on that could have led to something. 6.5/10

Blaise Matuidi: Another industrious display, lots of grit and fight, lots of running but little in the final third. Not a big issue though as his hard-work in midfield is often missed when he’s not there. 6.5/10

Matio Mandzukic: A tireless display for Marione who took his goal with the deftest of headers and could easily have had a least a brace. Did plenty of dirty work on the flanks and dropped back to help the team when needed. A machine.  8.0/10

Cristiano Ronaldo: A great night for Ronnie – Another goal to add to his tally for the season and plenty of attacking intent although there were a couple of moments where he could have done a little better. Still the teams difference maker. 7.0/10

Paulo Dybala: An exceptional free-kick aside, he didn’t offer too much in an attacking sense and spent much of the game drifting across the pitch trying to create things for his teammates. 6.0/10

Sami Khedira: A fresh pair of legs for Pjanic and kept the team ticking over. 5.5/10

Douglas Costa: A brief cameo near the end of the game. N/A