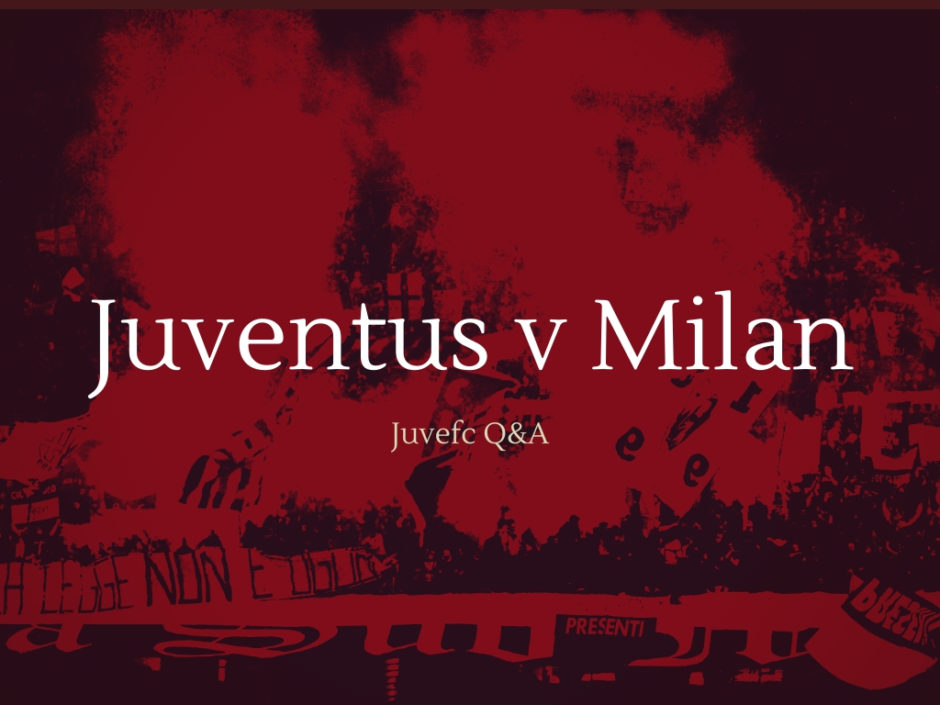 Just as the lads appeared en route for a hard-fought and veteran win against a very combative opponent, they once again fell victim of their own sloppiness in the back. Those mistakes have very little do with coaching and tactics, they come purely from lack of attention to details and lapses in determination. Sometimes, looking at how hard Inter and Lazio are going after it, it seems like the necessary amount of hunger for domestic glory is simply not there, which was instead a trademark of the previous versions of Juventus. The wake-up calls have ended, now it is time for everybody involved to answer the bell.

The Coppa Italia match with Milan is a whole different animal given the nature of the competition, however it still represents an opportunity to address and hopefully solve the road woes in what will be a very jazzed-up environment, despite what happened in the Derby. The Bianconeri have come out very flat in the last two away contests, four of the last seven considering the two against Lazio in Serie A and in the Supercoppa. Here too, the improvement has to come from within the players, considering that the coach, unless he is playing misdirection with the press, has always been preaching the verb of proactivity. It is not uncommon though for a technical line-up to lack intensity, so even if it is not a very appealing proposition, there could be some adjustments there.

Unfortunately, Douglas Costa got hurt again as he was getting it going, reiterating his destiny of being our Godot. With him out for the foreseeable future, given how slowly they have brought him along after the previous injuries, the diamond formation returns as the go-to scheme, with the main doubt being the one between Gonzalo Higuain and Aaron Ramsey, whose best moment to shine would be right now.

As for the line-ups, Mattia De Sciglio and Daniele Rugani are rumoured to start, although I would be wary about losing some muscularity in the back, while for the goalie it depends on whether they want Gianluigi Buffon to play Sunday to break the record or here. Danilo will be back in the squad list but probably will not be in the XI. It is possibile Miralem Pjanic get a day off.

Milan have changed a lot compared to the last match in November, which ended in a 1-0 victory thanks to a late Paulo Dybala goal. Stefano Pioli has led them to a decent run, as they lost just twice after that, against Atalanta and Inter, then the return of Zlatan Ibrahimovic in January did the rest. He is not as clutch or mobile as in the past, but his dominance in the air has solved a big problem for them, which was to keep the ball in the final third, something they had troubles doing with the less participative and physical Krzysztof Piatek. Now, whenever they have troubles creating something, they can toss one up, hoping the Swedish ace flicks it on for one of his teammates. Hence why the anti-aircraft artillery will be essential. He is also a charismatic leader, which they sorely missed.

After a poor first half of the season, Ante Rebic is coming on strong and has quickly mastered the craft of taking advantage of the attention drawn by Zlatan, becoming their second fiddle. He is also versatile, so they can tweak the tactics without changing personnel during the game if they want to. They shipped Suso and his lacklustre style of play out of town, promoting Samu Castillejo, who might not be the most skilled winger but at least he is energetic in both phases. Ismael Bennacer has also grown a lot over the last few months and has a big grip in the midfield.

They have a lot riding on the Coppa Italia, so they will likely trot out the best possible XI. Andrea Conti is suspended, so they will use either the more defensive-minded Davide Calabria or Alexis Saelemakers, although the latter will be a decent gamble. Possible substitutes are Rafael Leao and Giacomo Bonaventura, who are both flexible in terms of position and could also tilt the scheme compared to the 4-4-2 they have using recently. Other January newcomer Simon Kjaer has gotten some run over Mateo Musacchio, but he has not been super convincing.

Giorgio Chiellni to renew with Juventus