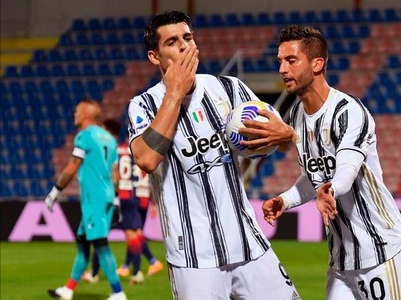 Juventus are believed to be happy with Alvaro Morata‘s performances this season, but his price may well be an issue.

Reports in Spain claim that the Old Lady are unwilling to match the agreed buy-price, or the pre-agreed fee to extend the loan by another year.

Juve are claimed to be able to land the Spanish striker for 45 million euros, or extend his stay by 12 months for 10 million euros, but neither is proving attractive at present.

The Bianconeri are instead hoping to slash some of their expenditure ahead of the new campaign, with AS also claiming that we are willing to accept 25 million euros for Cristiano Ronaldo’s signature in the coming window.

Paulo Dybala has also been linked with a potential exit, and those rumours will not have been put off after the Argentine was suspended ahead of the weekend for attending a party breaking Coronavirus protocols.

You wouldn’t imagine that the club could possibly allow all three to leave this summer though, meaning that they would go into the new season without a single striker from the previous campaign.

The club’s stance has so far been that Ronaldo will be staying with the club, but the future of the other two appears the least certain at present, but I struggle to believe that decisions have already been made on any of the trio.

Do you believe the Old Lady will know their transfer plans at this point in the campaign?

What Nedved told Ronaldo about his goal yesterday