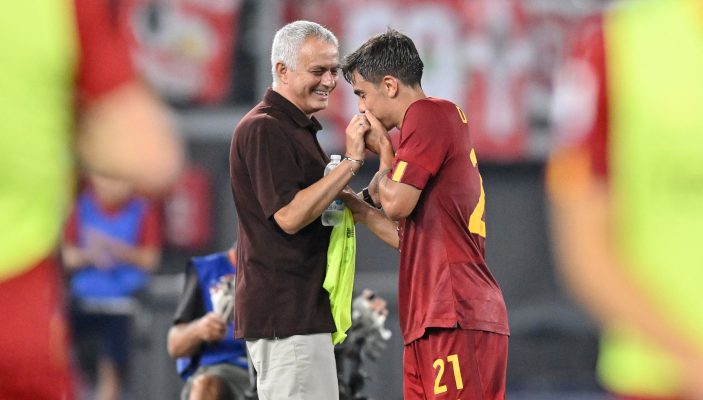 Paulo Dybala is off the mark as an AS Roma player after he scored twice for the Giallorossi in their win against Monza last night.

The Argentinian was on the books of Juventus between 2015 and three months ago.

However, the Bianconeri allowed him to leave as a free agent, and he has settled in Rome.

At Juve, he was one of the best players in the world, and opponents fear him when they face the Bianconeri.

Understandably, some of them envied Juve for having such an outstanding player on their books.

After his brace last night, Jose Mourinho has revealed that he told the attacker exactly what he told him in a game his Roma side faced against Juventus last season.

“Last season, when Juventus played here at the Olimpico and he was substituted, I told him: ‘You’re very good, kid.’ So tonight I said the same thing. We smiled because we remembered he was already scoring in this stadium.”

Several managers wanted to poach Dybala when he played for us, and Mourinho’s confession will not come as a surprise.

Not every Juve fan supported the decision to allow him to leave because we know how good the attacker is.

However, we have moved on, and we wish him the best in Rome.

Juventus agrees to a deal to bring midfielder to Italy