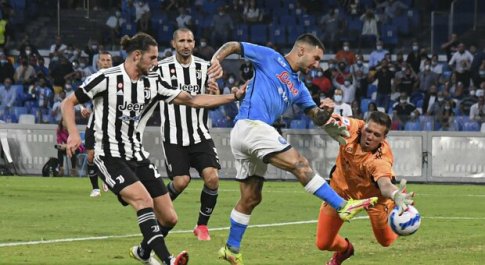 Napoli led the match against Juventus for just five minutes plus injury time, but the Old Lady were second best throughout the 2-1 defeat.

The Azzurri started the match with a mission, and were causing all-manner of problems until they were rocked by Alvaro Morata’s solo goal, when he dispossessed Kostas Manolas in defence before carrying the ball into the box to beat David Ospina from the tight angle.

Napoli reacted well to their setback however, and built their way back into a dominant position, but Giorgio Chiellini and Leo Bonucci have shown numerous times that they are not easy to beat, and Manuel Locatelli was fully at work making last-ditch interceptions and tackles also.

We managed to survive the onslaught to go into the break ahead, but unfortunately our lead was short-lived entering into the second-half…

Luciano Spalletti’s side came out with attack in mind once again, and after about 10 minutes of action, they found that breakthrough. Insigne was played in on the edge of the box before creating enough space to try and send his effort to the far right-hand corner of the goal, but Szczesny gets his leap wrong and fails to catch the floated ball, dropping it inside the box before Politano pounced on the loose ball to guide it home.

I can recall very few chances for our side in the second-half worthy of mentioning, but the painful moment when we finally fell behind for the first time in the match came with just five minutes remaining on the clock.

It was a Napoli corner which the goal came from, but it was substitute Moise Kean’s header which was eventually parried by our goalkeeper, but Szczesny failed to get the desire power on his touch and Koulibaly was right there to head into the open net.

That is now three matches without a win in Serie A, and Allegri now holds the record for longest winless run in the 21st century having gone eight matches without victory including his previous stint.