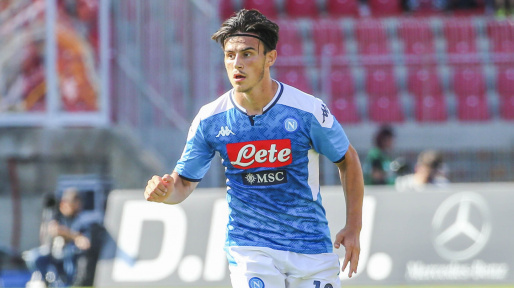 Eljif Elmas has become the latest Napoli player to test positive for covid-19 ahead of the match against Juventus.

Luciano Spalletti’s men are preparing to face Juve in around a week, but their preparation for the game has been affected by a covid outbreak.

Nigerian striker, Victor Osimhen, tested positive yesterday just as the Partenopei prepare to ask his country to allow the striker to stay in Italy until after the match before going to the AFCON.

He has now been joined by Elmas in self-isolation with Football Italia reporting it is the second time the North Macedonian has been infected.

He is fully vaccinated, but currently not in Italy, so he would self-isolate for now until he returns a negative swab.

This increasing number of covid cases at Napoli could fool the Bianconeri to think Spalletti cannot field a strong team.

But there is still time and some of these players could return negative swabs before the match.

With Fabian Ruiz and Lorenzo Insigne now available, the Partenopei would get the chance to field a very strong starting XI in the game and Juve needs to be prepared to earn all the points.

Hopefully, the Bianconeri won’t also suffer a covid outbreak before the game.

Video – Flashback to the 4-3 thriller between Juventus and Napoli