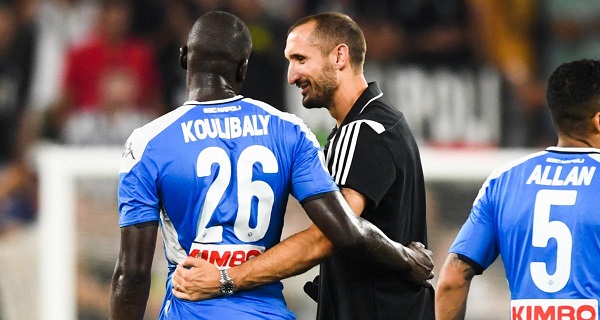 Napoli star on Chiellini: “He’s an extraordinary person and has always defended me”

In August 2019, Juventus and Napoli played an extremely exciting encounter that was heading towards a 3-3 draw… until Kalidou Koulibaly scored an own goal in added time that gifted the Old Lady all three points.

While the Bianconeri players were celebrating on the pitch, Giorgio Chiellini hopped on his crutches (due to his ACL injury at the time) to console his devastated opponent and give him some advice.

The Partenopei star undoubtedly considers the Juventus man to be a great friend following that gesture, however, it didn’t just stop there.

Unfortunately for the Senegalese, he has been the target of racial abuse on many occasions since his arrival to Italy.

However, he revealed that Chiellini has always been by his side in the battle against racism, and offered him all type of support after the latest incident in Florence during the encounter between Fiorentina and Napoli.

“Chiellini called me. I love him very much. When we face each other on the pitch, that’s the only time where I can’t be his friend,” said the 30-year-old center back in an interview with DAZN via ilBianconero.

“He’s an extraordinary person and has always defended me on all fronts. He gave me advice as a footballer and as a man.

“He was truly sorry and apologized on behalf of all Italians. In the end, it’s a fight that we all have to take part in, and Giorgio always told me that he’s by my side. It helped me keep going. It’s a good sign for the future.”