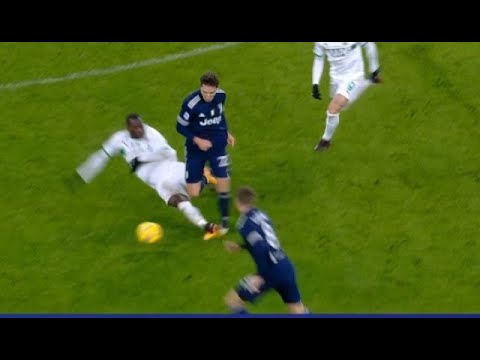 Pedro Obiang was red-carded in Sassuolo’s game against Juventus on Sunday for a cynical foul on Federico Chiesa, and he has now apologised.

The Spain-born Equatoguinean footballer committed the foul in the added minutes of the first half.

He seems to have given the Juve man a minor injury, as he needed to be checked by the medical staff yesterday.

Obiang has now taken to Twitter to apologize to his teammates and Chiesa.

The former West Ham man said that he never wanted to leave his team a man down and sent his best wishes to Chiesa.

He Tweeted; “First of all I would like to apologize because I made a mistake in the game that cost my team. I never wanted to leave the team down to 10 men and I also send my wishes to Federico Chiesa. Forza Sassuolo”

Chiesa has had one of the best starts to a Juventus career.

He has already played in 12 league games for them, scoring 4 times and providing 3 assists.

He still has the chance to deliver better performances for the Bianconeri, and it will be interesting to see how many goals he will be involved in at the end of his first campaign at the club.