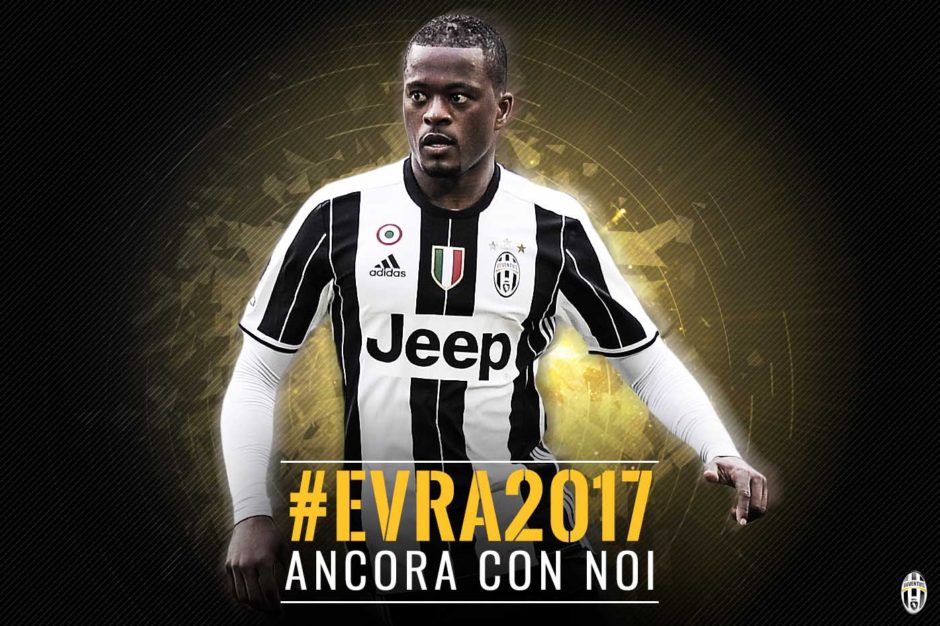 Juventus have confirmed that Patrice Evra has renewed his contract with the club, signing a new one-year deal.

Evra was a key part of the Juventus comeback last season and was hailed by Gigi Buffon as a leader during the Bianconeri’s remarkable turnaround.

“Patrice Evra has today renewed his Juventus contract for an additional year – with an option for a second – keeping him at the Turin club until at least 30 June 2017,” read the statement on Juventus.com

“Evra arrived at Juventus in the summer of 2014 on the back of a trophy-laden eight-and-a-half years at Manchester United, where he won five English Premier League titles, three League Cups and the Champions League.

“Back then, the Old Lady knew she was recruiting a natural-born winner, someone who matched her own philosophy and unbridled ambition when it comes to lifting titles and the marriage has proved an immensely happy one.

“The left back has continued his longstanding habit of picking up silverware, helping Juve to an historic second domestic league and cup double in consecutive seasons in addition to last year’s Italian Super Cup.

“His countless experience on football’s biggest of stages has been an invaluable element in the Bianconeri’s overall development into one of the major forces in the European game.

“With two successful seasons for the Bianconeri already under his belt, Evra, who is involved at this summer’s European Championships with France, will continue to call upon his boundless supplies of big-match experience and savvy to help the club climb to new heights in the next two campaigns.”

Pavel Nedved: ‘Our next goal is to win a 6th Scudetto’

2015/16 Youth Sector Analysis – The promising, the average and the woeful