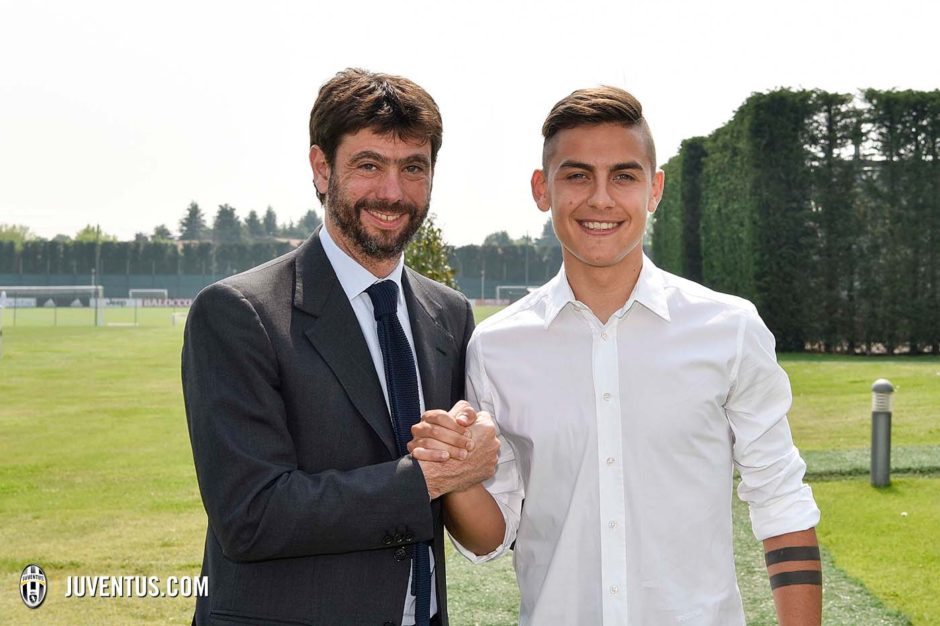 Juventus have confirmed that Paulo Dybala has extended his contract with the club until 2022.

The renewal has been in the works for some time as Juve seek to ward off interest from a host of interested clubs such as Chelsea, Barcelona and Real Madrid.

An official statement on the clubs website today confirmed the new deal had been agreed:

“Juventus Football Club is pleased to announce that Paulo Dybala has renewed his contract until 30 June 2022, extending a journey that began in July 2015.

“Juventus is stepping into the future and they will be doing so joined by La Joya for the next four years.

“Juventus Football Club S.p.A. announces that, following the renewal of the employment contract with the player Paulo Dybala until 30 June 2022, the performance bonus of € 8 million became due to U.S. Città di Palermo S.p.A. and will be paid in four instalments starting from 2018/2019 football season.”

There isn’t believed to be a buyout clause in the contract while Dybala is set to earn close to €7m per season as part of the new deal.

Speaking after the renewal, Dybala expressed his happiness with the new deal and what it means to play for Juventus.

“I’m very proud and happy to be at this club.” He told the clubs official Youtube channel.

“It’s difficult to imagine that so many positive things could happen all at once. This is a week full of special emotions for me.

“I’m extremely happy with what I’ve managed to achieve and what I’m doing for this team, this club and these fans.

“My best moment so far? I’d say my best moment was signing my first contract with Juventus, when I knew that I’d be a part of this club, because joining an internationally renowned team like this was an unforgettable feeling.

“Everything else is a result of signing that contract. Playing for Juventus is something you dream about when you’re a kid. Playing for a big European club is what e in Argentina aim for.

“The first days of training when I was on my own, the first sessions and friendly matches are all things I’ll never forget.

“The boss knew what he was doing, and gave me the right amount of time to get to know this team which – with all due respect – is different to Palermo because here we’re always playing to win trophies.

“The way he bedded me in was spot-on, fortunately everything went as well as it could have done thanks to him and my teammates.

“The new role? It’s a position I enjoy, it’s where I played for the Argentina youth teams so I know the role pretty well and Allegri has given me planty of freedom on the pitch.

“I’m enjoying myself and I have great teammates who help me, I’m feeling good and that enables me to play with calm and composure.

“My Barcelona goals? I think the second one was more difficult, given where I was on the pitch, but I preferred the first because it was on the turn, the box was full of bodies and I didn’t have time to think.

“I didn’t look up at the goal but I knew where it was and thankfully I managed to steer it home.

“We knew it would be a tough match for the full 90 minutes and it was, we were very well prepared and motivated and that helped us secure the victory.”

“Where will i be in 5 years? It’s difficult to say,” Dybala replied.

“I’m grateful for the comments but I think it’s still early days I’ve still got a lot to achieve, so I thank Gigi but I want to keep working hard, playing as well as I can and winning trophies with this club.”