Like many others, I was very much looking forward to this match. The first opportunity to test our new system outside of Serie A, against at least on paper, the strongest side we have faced in 2017. This was a step up to the biggest stage of all and the furore of Bonucci’s nuisance had been matched with talk of our standing as potential winners of the tournament in quarters high and low.

First step on the voyage was a trip to Porto, the side which had finished second in a fairly easy group, smashing 5 past Leicester City in the final fixture to secure qualification to the knock-out stage. Their european pedigree is solid and they continue to produce talented players plucked by sides elsewhere in Europe for mega money. One of which in recent times, was our very own Alex Sandro.

I felt excited and confident. And was buoyed by the emergence from the tunnel of a German referee. For the Germans are generally no nonsense, get on with it kind of officials. They don’t beat around the bush and have no issue imposing themselves on games. Yet also like to let the football flow. I had hoped Dr Felix Brych would be Brick by name, brick by nature. As he proved…

Buffon – Such was our dominance, Santo Buffon had not one save to make. A passenger, who distributed the ball calmly and exuded authority throughout. 6.5

Chiellini – Other than the one misplaced pass which Buffon headed out to safety, Giorgio was sturdy and hardly needed to make a tackle. 7

Barzagli – More of a worry was Andrea, for his fitness had been questionable of late. Yet he fared well, was composed and showed pace on the few occasions required which belied his ageing legs. 7

Lichsteiner – Great to have him back in Europe, for his experience was welcome as was his guile. Positioned himself well to make damn sure that scything challenge took him down without breaking his leg and led to the expulsion of the hapless Telles. Showed good support up top and picked up his trademark booking for a 50/50 challenge in the opposing box, which I felt was a little harsh. 7

Sandro – Alex did not put a foot wrong for the entirety of the game, other than losing Herrera for a header which he skewed comfortably wide. Given plenty of space to work with, he was superb both on and off the ball. I struggle to suggest an equal, let alone superior Left Back in the world. Technically gifted, fast, strong with great stamina. A constant threat in the final third and always manages to play the ball intelligently when under pressure. Lovely assist for Ales for the second goal.  World class. 9

Khedira – Given licence to bomb forward with Pjanic appearing closer to a sweeper in turn, Big Sami went agonisingly close with a sliding shot in the box and also tested the keeper from range. Bossed the midfield. Showed some glorious touches and had a header drift just wide. 8

Pjanic – As mentioned, he was sitting mightily deep, making the defence almost a back three for the opening 20 minutes. Produced a few brilliant passes and used the ball smartly. 7

Cuadrado – Not one of his better games, yet he did supply several decent balls into the box and drew the first yellow which soon after led to the red. 6

Dybala – Found the going tough in terms of making inroads into the always congested 18 yard area yet came ever so close with a beautiful strike from outside the box which hit the post and it was his work which led to the opener. Also had a close range finish into the top of the net wrongly cancelled out for offside. 7

Higuain – Porto played very deep, with a strong centre back pairing leading to little service for Gonzalo, who fashioned just the one decent shot towards goal which sailed a few feet wide, yet even that was conjured with three defenders in close attendance. He became frustrated as the game wore one, which is fine, as long as it doesn’t boil over into trouble. 6

Mandzukic – Failed to achieve much in the final third, though worked exceptionally hard and locked down the left central midfield area with his hard running and berserker determination. He did his job. 6.5

Pjaca – Took his first goal for the club superbly and showed more than a few glimpses of his potential on the ball when driving towards goal. In my eyes and heart he became a juventino with that strike. 7

Alves – Finally provided the very potency we signed him to produce, just when it mattered most. Barely warmed up, he found himself in the box to collect a perfect pass from Sandro, took the ball down with his chest and poked the ball through the legs of a defender into the top corner. 7.5

Make no mistake, Porto are a quality side. They showed some magnificent defensive prowess, the two centre-backs impressed me as did that spiteful rat merchant Pereria at RB. Setting out their stall to defend, offer us the ball seemed a strange choice of tactic, for we are often ragged when faced with a high press. Their aim was to hit us on the counter attack. Yet even before the red card, we looked comfortable and in full control. It was equally odd to find them gifting us close to complete control of the flanks. Tactically they got this game wrong.

The sending off was warranted and it is pathetic, yet to be expected, to find the Porto coach and players focusing on the decision rather than pay respect to a superior opponent who outplayed them, showed more endeavour for the full 90 minutes.

They took a few dives, and committed several quite nasty fouls. The card count could have been worse for the hosts. Yet the german ref did well, in a cauldron of maniacal partisan support, with the volume raised with every 50/50 decision. He stood firm in the face of players and thousands of fans. Which is to be expected. For he is German. There were however, a couple of dodgy decisions by the linesmen. Namely the offside for Dybala’s ruled out goal and also a passage of play which was allowed to continue long after the ball had clearly gone out of play. Pjanic was also punished for the ball striking his knee.

We played well, with Sandro and Khedira the stand out performers. Pjaca took his goal with power  and poise and Alves added the icing to the cake. Allegri’s substitutions seemed heaven sent!

They did not test us defensively, played too deep and my only hint of angst comes from yet again our profligacy, for I counted 16 chances, 6 of which were begging to be finished. We must improve on this as it has been a facet of our play since we changed tactics. Yes, it is great to be making so many chances, especially against a very well drilled and technically capable outfit, yet we will find fewer chances against the better sides in the tournament.

It comes as no surprise to find us the only team in this round to keep a clean sheet and to register zero serious shots on our goal. In terms of a threat, just the Herrera header, which danced wide. Other than which they caused us no problems whatsoever in our own third. And I doubt the game or scoreline would have been markedly more different had they kept 11 on the field. We were more inventive, more adventurous and more determined from the first whistle to the last.

This was a game which truly set my heart ablaze, even watching the full match replay this morning, I found myself shouting and roaring, charging round my room to celebrate with my faithful hellhound Oscar, who despite my volume, remained uninterested and fast asleep with his paws in the air!

Lichsteiner and Cuadrado need to stop rolling over and over when fouled. It is not becoming of a Juventino to behave in this way and causes more harm than good.

Overall, this was a professional, well deserved victory. We have one foot in the quarter finals. And must now focus on Empoli for the weekend. 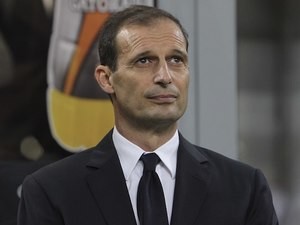 The club are once again filling me with pride. Allegri must be given credit for weathering a needless storm and using it to his and the club’s advantage. There was no hint of dissent in the ranks, we appeared very much together, all hearts beating as one. I have no inkling that Max is planning on leaving the club in the Summer. Much has been written of the possible opening at Arsenal, yet I cannot imagine he will consider leaving unless we win the treble, for then, what more would there be to achieve with Juve? He strikes me always as far more pragmatic and canny than most give him credit for. Yes, Conte dragged us back from the shadows into the limelight of the elite, but Allegri has changed our style and dealt amazingly well with all that has threatened to derail our progress. I hope he stays for many moons to come.

I must add that we remain a work in progress, and find ourselves in the strange position of entering the final segment of the season still unsure of our potential. I believe we need to be pushed,by the very best to now grow further, to continue to blossom. For one thing is for certain; we are not yet playing at our peak.

We are one of very few sides in the last 16 who can defend as well as attack with purpose. Yes, we still need to grow, but the dream remains very much alive. Great to watch, at times delightful on the ball with grinta in spades…