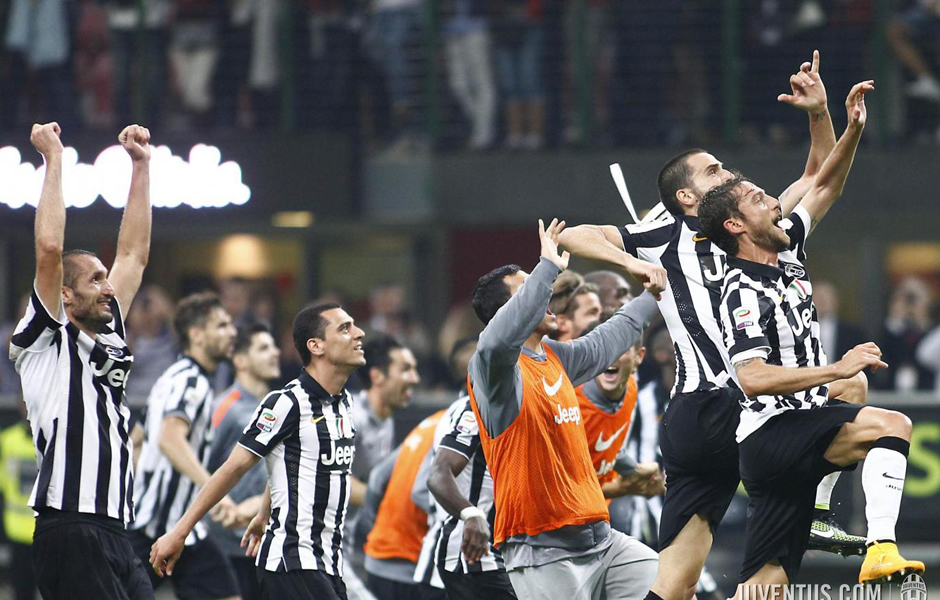 Despite being a match still in the very early stages of the season, this Milan-Juventus presented itself as a crucial encounter in the battle for the scudetto. Both teams arrived with a 100% record of effectiveness, having won both matches they played so far and in the case of the the bianconeri also winning their champions league encounter mid week against Malmo.
After a very disappointing season under Allegri the first six months, and Clarence Seedorf the latter part of the season, Milan was willing to let the disappointments behind this season and secure at least a Champions League spot. The start under Pipo Inzaghi was very promising wining against Lazio 3-1 and against Parma 5-4, in a very thrilling game that showed Milan’s strengths and flaws very accurately, a very shaky defense able to concede a few goals and a formidable offense, with the likes of newly arrived Menez and Stehpan El Sharawy, slowly going back to his best form. Juventus picked up where it left last season after cruising to the scudetto in terrific fashion. Now with Allegri in the bench instead of Conte, the change doesn’t seem to have affected the team one bit. Three matches played, three won and no goals conceded for Juventus so far this season. Despite a lot of talk of switching to a 4-3-3, Allegri maintained his predecessor’s 3-5-2 with no major changes in the formation. Arturo Vidal and Andrea Pirlo both very important players for the bianconeri in the past few seasons were out with injury although the Chilean midfielder was able to made the bench.
Line-ups: (image)

Juventus started better the match, pressing very high on the pitch and not letting Milan midfielders receive the ball and get out of their half. Marchisio and Pereyra were winning the battle in midfield against De Jong and Muntari and dominating midfield. The bianconeri were holding position comfortably but struggling to create chances nonetheless and didn’t trouble Abbiati much aside from a shot from Pereyra that went over the bar. Slowly, Milan started improving and the match was being played in Juventus’ half but with similar problems the bianconeri showed early in the match, keeping possession but not being creative enough to create concrete chances. Honda had the first important scoring opportunity in the match when he beat Chiellini in the air and had a great header saved brilliantly by Buffon. Juventus responded a few minutes later with a great combination between Tevez and Pereyra that finished with Llorente narrowingly missing a one on one versus Abbiati. The match was getting interesting with the visitors starting to dominate again. Pereyra that was slowly becoming one of the best players on the pitch was denied by Abiatti after a good combination with Llorente and Bonucci had a header gone over the bar seconds later. The clearest chance however arrived in the 38th minute, a left footed shot from Marchisio from outside the box that left Abbiati beaten but hit the post when it looked like Juventus were already celebrating. Not much happened in the remaining minutes of the first half aside from Cáceres having to be replaced by Ogbonna because of a muscle problem.
The second half started far less thrilling than the first. Juventus was keeping position more than Milan but not attacking much unlike the first half, while Milan was waiting and hoping to get a counter attack for Menez and El Sharawy. Marchisio had a somewhat dangerous shot that went out wide but not much happened until the 70th minute, when the only goal of the match arrived. Tevez received the ball from Marchisio and passed to Pogba. The Frenchman hold it perfectly and waited until Tevez was alone to return the pass that left him one on one against Abbiati. He waited until the goalkeeper moved to the left to slowly put it away and give Juventus the win. With this goal Tevez has scored the last three goals for his team in all competitions after the brace against Malmo, and four of the last five after scoring in the victory against Udinese last week. Like last season, the Argentinean striker is proving to be the most important player for Juventus but also showing his top form in Europe this time around.

G.Buffon, 7: Wasn’t troubled much but responded very well when it happened. Had a brilliant save from Honda in the first match that would have changed the course of the match.
L. Bonucci, 6.5: Solid at the back and decent in distribution. Quiet match for the center back.
M. Cáceres, 6.5: Was having a great level like he showed since the season started but had to be replaces in the 35th minute because of an injury.
G. Chiellini, 6: Made a few nice interceptions but lost Honda when he almost scores through a header.
S. Lichtsteiner, 6,5: Very solid performance from Stephan. As always running his heart out for 90 minutes and providing dangerous crosses into the box.
C. Marchisio, 7: Was instrumental in attack as well as in defense and almost scores a screamer in the first half but his shot hit the post.
P. Pogba, 7: Great match from the midfielder. Assisted Tevez and was very active during the ninety minutes.
C. Pereyra, 7.5: Quite a pleasant surprise for most juventini, had a great performance in the first half creating opportunities and helping in defense.
K. Asamoah, 6: Not particularly a great match from him but worked hard in defense and always offered himself as an alternative on attack.
F. Llorente, 7: Hold up the ball very well for his team mates in most occasions and came close to scoring but was denied by a great save from Abbiati.
C. Tevez, 8: Again giving Juventus the win like four days ago against Malmo and proving to be the most important player in the team.

Allegri after the match:

“For us, this was a difficult game against a direct rival for the Scudetto.”
“It was not a normal game; I would be a hypocrite to say otherwise,”
“At Milan, I experienced intense moments, but this is absolutely not revenge.”
“In this moment, I’m the coach of Juventus but the Rossoneri bench was an important period in my career. There, I had a lot of satisfaction.”
“But I’m lucky and proud to coach this squad.”

Inzaghi after the match:

“I was angry because we really hoped that we’d be up to the level of an extraordinary team”
“I told the players I am satisfied, as after two rounds we can’t be on the same level as one of the strongest teams in Europe.
“If Honda’s header had gone in, the game would’ve changed. We put two strikers on and tried to get back into it, but to no avail. Tonight should give us the awareness that taking it one game at a time we can grow and get closer to Juve and Roma, who have something more than the others.”
“The goal was created by two great champions who decided a game that otherwise may well have ended 0-0 for a positive point. The defence had a great game tonight and closed off most of those runs.
“We are all disappointed not to get a result, but at the same time taking points off a side that won the Scudetto three years in a row and last season had 50 more points than us was asking a bit too much.” 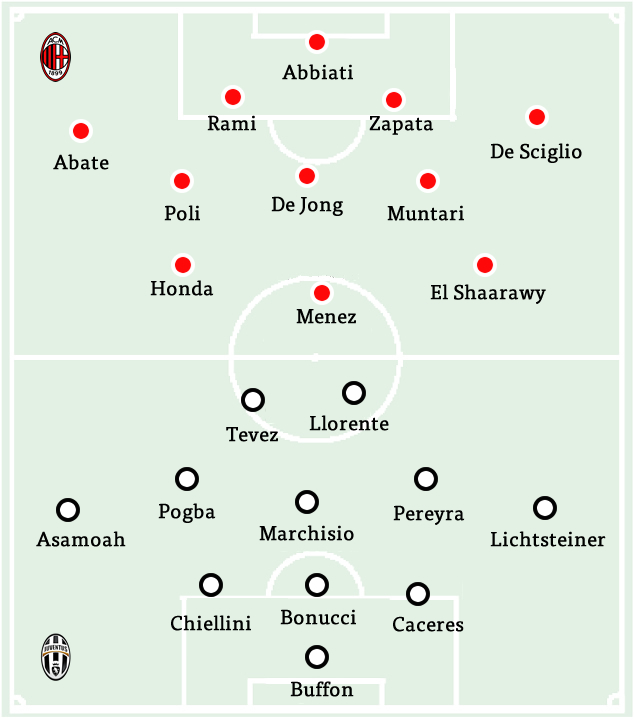