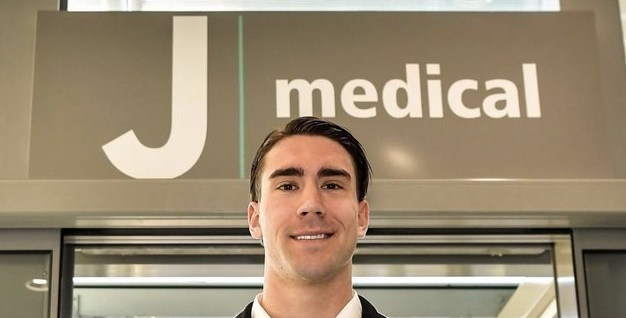 “Pride, tradition and family” – The first words of Vlahovic after signing for Juventus

To say that Friday was a memorable day for Dusan Vlahovic would be  a major understatement.

The Serbian celebrated his 22nd birthday while finalizing his hefty transfer from Fiorentina to Juventus.

The bomber is set to become the main attraction upfront for the Bianconeri, and he appears to be aware of the great responsibility.

The former Partizan youngster is currently leading the Serie A scoring charts alongside Ciro Immobile with 17 goals for each, and will be hoping to celebrate the Capocannonieri award by the end of the campaign while helping the Old Lady achieve her objectives.

In his first interview after signing for Juventus, Vlahovic appeared to be calm, confident and already at ease with his new surroundings.

The striker emphasized the importance of the switch for his personal career, while describing what Juventus means to him.

“Today is a very special day for me, one of the happiest birthdays I’ve ever had,” said the new Juventus player as reported by Calciomercato.

“Juventus represents pride, tradition and family… An immortal thing is that Juve is always there until the end, they never give up: these are the first things that come to my mind.

The former Viola star confirms that the team’s objectives must come above personal accolades.

“Above each personal objective, the team’s interests must be put first. I am available to the coach and to my teammates.

“My message for the fans? I would like to continue on this path and make this club proud. We will never give up and we will fight to the last to accomplish all our goals. Fino alla fine!”
Dusan Vlahovic