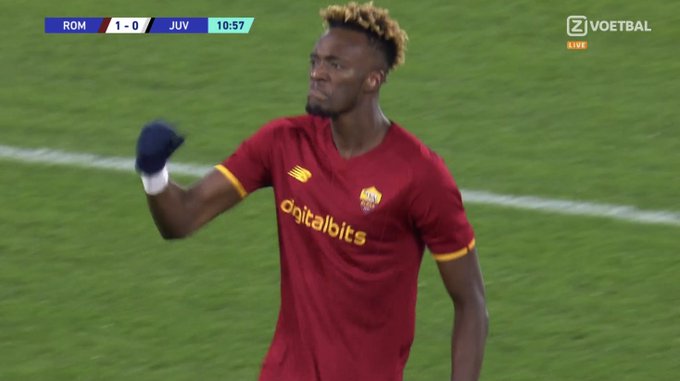 Paulo Baldieri has claimed that Tammy Abraham is better than Juventus striker Dusan Vlahovic when speaking live on the radio.

Roma moved to sign the former Chelsea academy star last summer after he had helped the Blues to become Champions League winners, with his former side splashing out on Romelu Lukaku in his place.

In his debut season with Roma, Abraham has notched up 18 goals in all competitions, as well as adding four assists to his contributions tally, and is earning every bit of praise that has come from current boss Jose Mourinho.

The biggest praise may well have come from former Giallorossi star Baldieri however, who has moved to claim that he is ‘better’ than Juventus’s January signing Vlahovic, who is setting the Italian division alight over the past 18 months.

“Roma are doing the usual championship we have been used to watching for years,” Paulo told Centro Suono Sport listeners (via TuttoJuve). “The team goes on the pitch without an idea of ​​the game, it seems to me that it is committed but the players lack personality. The fans ask for a team that wins but they need a match. Growth of the squad that does not pass Mourinho.

“This type of coach had to be taken later when there was already a squad ready because he needs a team already set up. Tammy Abraham is a good player, I think he is better than Dusan Vlahovic. The goal. this season may be the Conference League but I hope that there will also be satisfactory results between now and the end of the season. However, what I have seen so far is too little, it is not enough for me.”

I struggle to believe there is any comparison as of yet, and the jury is still out as to whether Tammy will still be playing at the top level in five years time, while Dusan is already ahead of him and has the ceiling for much more. Abe has too many question marks for me, whereas Vlahovic just continues to tick boxes.