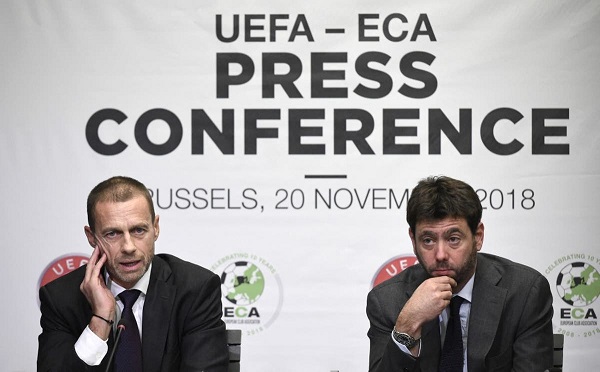 A new report from the New York Times as cited by Football Italia says UEFA President Aleksander Ceferin and Juventus patron Andrea Agnelli worked on a statement to assure everyone that everything was fine just hours before the participating teams announced the European Super League.

The report says Ceferin had spoken to Agnelli on Saturday after hearing about the breakaway league and the Italian assured him that it was just “rumours”.

Incredibly, the next day all the teams involved announced they were breaking away from the ECA, including Juventus led by Agnelli, who also resigned his position as the president of the organisation.

The report says the plans for the ESL had been so top secret that even senior officials at the various clubs didn’t know about it.

It says Agnelli had committed to reforming the Champions League and when rumours of something brewing in the background was out, Ceferin felt he needed to put out a communique immediately.

He called Agnelli while driving for eight hours from his home in Ljubljana to his office in Switzerland.

Agnelli didn’t pick up initially. When he called the Juve man’s wife, the patron returned his call and assured him that nothing was going on and it was just “rumours”.

However, after drafting a statement to calm everyone’s nerves, he sent it to Agnelli to make changes, but he turned off his phone and there was no more communication between the pair before the participating teams announced that they had formed the ESL.

“No thank you, too much chaos” one favourite rules out replacing Agnelli at Juventus